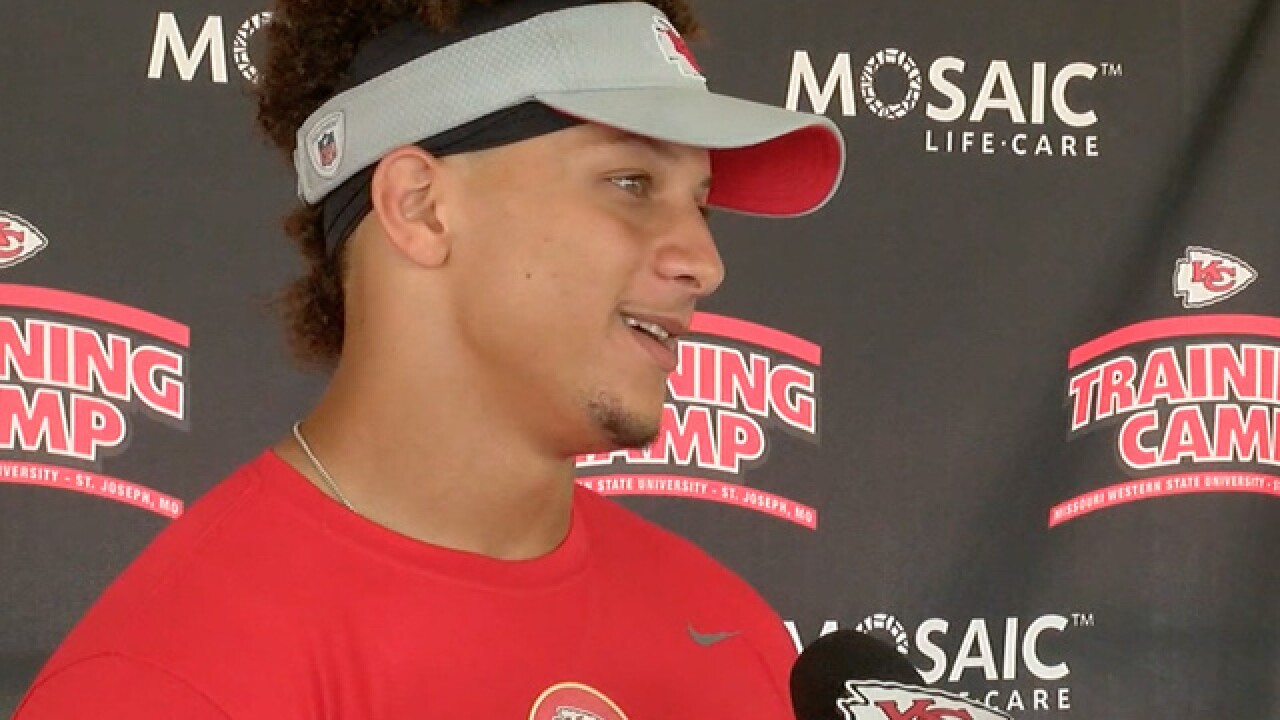 KANSAS CITY, Mo. -- Everybody is talking about "The Throw" -- Patrick Mahomes' 69-yard heave (68.5 yards in the air) to Tyreek Hill for a touchdown against the Falcons -- so I thought I'd talk about "The Other Throws."

The title could use some work but at least you know what I'm talking about.

Thus, with the magic of video fast forwarding, rewinding, pausing, etc. at my disposal, here are some words (mine and Patrick's and even Andy Reid's) on the 12 other times Mahomes chose to advance the ball with a forward pass.

1st Quarter, 9:57, 3rd & 4, Chiefs 20-yard line
Mahomes moves through his progressions, steps up in the pocket, dumps it off to Hill on a drag route, and Hill is stuck one yard shy of a first down. Sammy Watkins actually missed an opportunity to pick Hill's man, who made a great play forcing KC to punt.

1st Quarter, 5:22, 1st & 10, Chiefs 20-yard line
Back at the same spot on the field to slay the dragon and, sure enough, Mahomes takes advantage of the Falcons' soft coverage, hitting Hill on a quick out route that picks up a first down.

1st Quarter, 4:49, 1st & 10, Chiefs 30-yard line
The next play was a quick screen to running back Kareem Hunt who was split out as a wide receiver. The Falcons defensive line read this play like a children's book. Hunt is thrown for a three-yard loss. So far Atlanta is working under the assumption that Hunt is getting the ball every play. They've been right three out of five times. Mahomes is 3-3 so far for a measly 10 yards.

1st Quarter, 4:27, 1st & 10, Chiefs 45-yard line
Taking advantage of a personal foul called on the Falcons as a result of the NFL's new "lowering of the helmet" rule (otherwise known as a "tackle" in every other year of football), the Chiefs turn a three-yard loss into a 15-yard gain. The Chiefs clearly have read my previous paragraph and wisely play-fake to Hunt, leaving Mahomes all alone on the bootleg. One pump-fake and Travis Kelce box-out later, Mahomes has scrambled for seven yards.

1st Quarter, 2:55, 3rd & 11, Chiefs 44-yard line
Hunt must have been the only guy on the Falcons' scouting report. Meanwhile, the Chiefs line is blocking like they've never heard of him. That cocktail results in an eight-yard loss leaving the Chiefs at 3rd & 11. That's when Mahomes makes his best throw of the night. You heard me! Better than "The Throw". This was "The Toss" (sorry, I'm horrible at titles). A 12-yard out to Travis Kelce (who, gasp!, runs beyond the sticks) who doesn't break stride on a perfectly timed throw by Mahomes. Don't look now but Pat doesn't have an incompletion.

2nd Quarter, 15:00, 1st & 10, Falcons 17-yard line
The Chiefs are driving if you haven't noticed. Hunt is finally getting loose and probably deserves his own article at this point. Mahomes continues to look at any pass-catcher not named Sammy Watkins. Kelce gets loose on a carbon-copy of the 1st quarter play: 12-yard out, 1st down. This part of the game was Mahomes' favorite.

"We drove it pretty much the length of the field," Mahomes said. "Just to see the ball moving and being able to convert on third downs is stuff that you're going to have to have during the season."

2nd Quarter, 13:47, 2nd & Goal, Falcons 2-yard line
On what should have been Mahomes' first touchdown pass of the night, he gets Hunt one-on-one with the linebacker, and Hunt makes the catch and falls into the endzone. But a line judge on a flag-happy crew decides to make a hero call in a preseason game, calling illegal formation on the Chiefs as Mitchell Schwartz "wasn't lined up on the line of scrimmage", which was a stretch at best. TD called back. Resulting in...

2nd Quarter, 13:38, 3rd & Goal, Falcons 7-yard line
Mahomes first bad decision of the night. Flushed out of the pocket and on the run -- where Pat feels comfortable and not a bad plan on goal to go situations -- Mahomes spots what he thinks is a wide open Watkins. Instead, the cornerback is lurking in zone coverage and knocks it down. (Note: the Atlanta Me is blogging about how the cornerback, Blidi Wreh-Wilson, should have intercepted it. And Atlanta Me is right.) The other problem on that play is that Watkins doesn't know where Wreh-Wilson is, otherwise the veteran wideout could have -- should have -- stepped up into that throw perhaps catching it, perhaps creating a pass interference.

2nd Quarter, 4:54, 1st & 10, Chiefs 17-yard line
Meanwhile, the Chiefs defense is playing uninspired football and has given up another touchdown drive. Mahomes makes a second straight bad decision, curiously to Watkins again. Mahomes lofts a deep ball to Watkins down the right side. The safety comes over to make an easy pick. Watkins never had a shot. It's Mahomes first INT of the preseason.

2nd Quarter, 1:07, 1st & 10, Chiefs 8-yard line
Chiefs get the ball back late in the 1st half and are really trying to force the ball to Watkins, who drops a first down pass from Mahomes.

"Sammy is still working through the offense," coach Reid said. "I love his intensity on learning all the small things." Big things could use some work.

Asked how many times he's watched "The Throw", Mahomes said, "Not as much as I think everyone else has."

In other words, he was telling you to read this article.