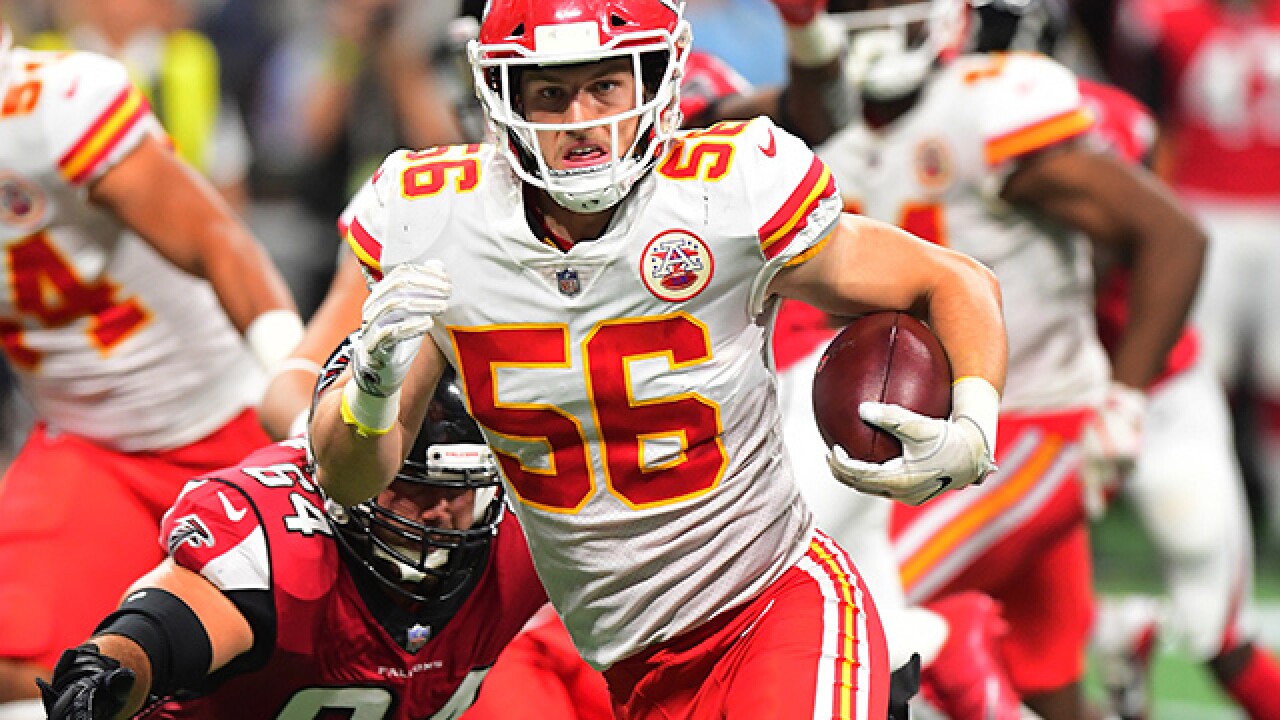 Copyright 2018 Scripps Media, Inc. All rights reserved. This material may not be published, broadcast, rewritten, or redistributed.
Scott Cunningham
<p>ATLANTA, GA - AUGUST 17: Ben Niemann #56 of the Kansas City Chiefs returns an interception for a touchdown against the Atlanta Falcons during a preseason game at Mercedes-Benz Stadium on August 17, 2018 in Atlanta, Georgia. (Photo by Scott Cunningham/Getty Images)</p>

KANSAS CITY, Mo. -- With a showing so far in the pre-season that's left more questions than answers, the Kansas City Chiefs have plenty of options of which defensive players should make the final roster.

(Before you get reading about which offensive players are likely to make the roster, it's important to know what criteria might be used. Nick Jacobs breaks it down here ).

The injuries of Allen Bailey and Xavier Williams may force the Chiefs to keep an extra defensive lineman for the first week of the season. Justin Hamilton put on a strong performance in Chicago that was worth a roster spot. McGill could find a home in the NFL with a defense that shoots gaps at the defensive tackle position.
Out: #99 T.Y.  McGill, #96 Dee Liner (Practice Squad), #90 Stefan Charles and #93 Mike Purcell

The Chiefs appear set at the outside linebacker position with their promising rotation of Breeland Speaks and Tanoh Kpassagnon. Speaks would be ideal on run downs with Dee Ford spelling him during pass rushing situations.

Frank Zombo is a reliable special teams performer that saw a serious uptick in reps during the most crucial game of the preseason. McCray has promise as a pass rusher but needs time to develop his pass rushing skill set and improve his strength in run support.
Out: #54 Tyrone Holmes and #65 Rob McCray (Practice Squad)

The depth at the inside linebacker position was greatly helped by the development of Ben Niemann throughout the preseason. The un-drafted free agent arguably positioned himself as the third-best inside linebacker on the roster with his strong performances against the Texans and Falcons.

Niemann is capable of getting off blocks. He has strong instincts, great pursuit and gets in the right position when it matters. His work ethic will likely make him a strong special teams performer and quality developmental depth behind Anthony Hitchens and Reggie Ragland.

O'Daniel will likely be fourth on the depth chart. He should help out on special teams and in sub package coverage situations.

Eligwe still has a strong upside with his athletic ability. It could help him maintain a home on special teams this season.

Smith appeared slow in his ability to read and react to the movement in the backfield. He was out of position in pursuit and looked lost in coverage. The organization has spent three years in his development and he doesn't appear any closer to becoming an inside linebacker than he did when he arrived in town.

Raymond Davidson flashed some ability that warrants an investment on the practice squad.
Out: #48 Terrance Smith , #52 Otha Peters and #60 Raymond Davidson (Practice Squad)

The cornerback position could still be in flux depending on what players are waived or released on Saturday.

David Amerson looks lost in coverage and found himself in trail position far too often during the preseason. He appears to lack the ability to close on a receiver. The Chiefs may keep him on the 53-man roster but if a replacement opportunity is available it would be surprising if the team doesn't explore it.
Out: #24 David Amerson,  #43 Makinton Dorleant, #47 Step Durham, #30 Keith Reaser, #26 Will Redmond (Practice Squad), #40 D'Montre Wade (Practice Squad)

The safety position may not be settled on Saturday. Watts, McQuay and Murray are all likely to have growing pains throughout the season. Eric Berry's heel injury exposes massive weaknesses in the depth at this position. Veach will likely need to invest in an additional safety or even entertain bringing in a high impact starter to create a safety net for arguably the biggest weakness on the Chiefs roster.

Specialist (3)
#2 Dustin Colquitt, #7 Harrison Butker and #41 James Winchester
The players are likely locked in and shouldn't have to worry about a call from the front office on Saturday.

Nick Jacobs can be found on Twitter: @Jacobs71  and can also be heard on the 4th and 1 podcast brought to you exclusively by 41 Action News. 4th and 1 is available on iTunes , Google Play  and TuneIn .