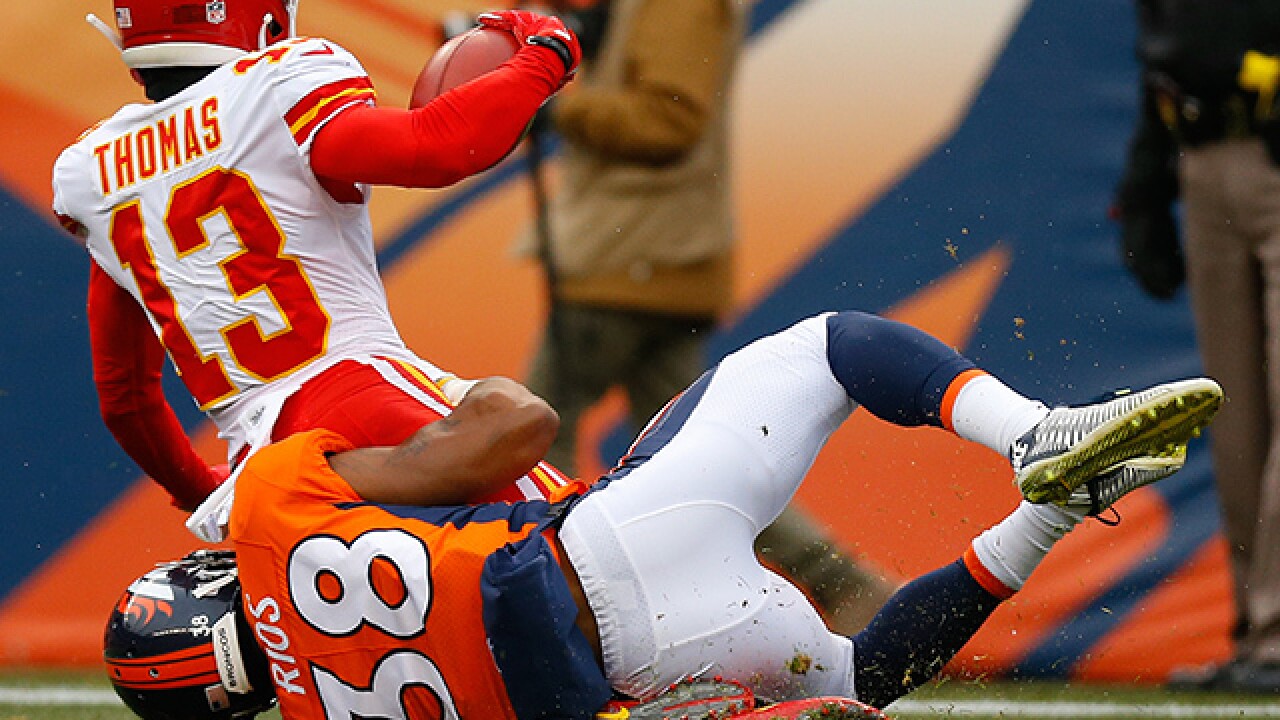 Copyright 2018 Scripps Media, Inc. All rights reserved. This material may not be published, broadcast, rewritten, or redistributed.
Justin Edmonds
<p>DENVER, CO - DECEMBER 31: Wide receiver De'Anthony Thomas #13 of the Kansas City Chiefs rolls his ankle while being tackled by cornerback Marcus Rios #38 of the Denver Broncos during the first quarter at Sports Authority Field at Mile High on December 31, 2017 in Denver, Colorado. (Photo by Justin Edmonds/Getty Images)</p>

KANSAS CITY, Mo. -- The Kansas City Chiefs are loaded on offense, making the decisions by coaches and the front office particularly difficult on this side of the ball.

(Before you get reading about which offensive players are likely to make the roster, it's important to know what criteria might be used. Nick Jacobs breaks it down here).

Patrick Mahomes is the clear-cut starter on the roster. The former top-10 pick got the necessary reps this preseason to build a comfort level in the offense and create good timing with Travis Kelce, Tyreek Hill and Kareem Hunt that will pay off later in the season.

Chad Henne solidified himself as the backup quarterback will his veteran presence. Henne was calm in the pocket, threw an accurate ball and steadily improved throughout training camp.

Chase Litton had good velocity on his football and continually improved his accuracy throughout the preseason. He also climbed the pocket well with his awareness and evaded pressure at a level some veterans haven't even mastered.

Litton would be tough to sneak on a practice squad and has a high ceiling. Matt McGloin was inconsistent and has likely reached his potential as a quarterback in the league.
Out: #5 Matt McGloin

The Chiefs have an extremely tough decision on if they elect to keep four running backs and a fullback or three running backs. The position has five running backs that can make an NFL roster and contribute during the season. The staff appears to be making their final decision between Kerwynn Williams and Darrel Williams.

Kerwynn Williams did not see any snaps in Chicago while Darrel Williams saw a healthy dose and even received some reps with the first team offense. With the developments in Chicago, the nod appears to be going to Darrel Williams as the fourth running back on the roster.

Kerwynn Williams is arguably the fastest running back on the roster but he will find work somewhere else in the league if he leaves Kansas City. Darrell Williams will be tough to sneak on the practice squad if he is waived.
Out: #25 Kerwynn Williams, #30 Algemon Brown and #38 Ray Lawry

The top three positions appear to be set at wide receiver with Hill, Watkins and Robinson all making the roster. Conley saw an extensive amount of time with the first team offense and will likely be given more time to return to full form after his Achilles injury.

Marcus Kemp made the most of his opportunity in Chicago. He showcased his relentless attitude by not giving up on a routine catch and turning a solid gain into a 55-yard touchdown. Kemp has also seen the most reps on special teams among wide receivers.

The final roster spot is potentially between Gehrig Dieter, Jehu Chesson and De'Anthony Thomas. Dieter has shown growth as a route runner but could use additional time on the practice squad.

Chesson never really stood out during his 56 reps. Thomas saw minimal reps but he is capable of being a gunner and returner on special teams, as well as a fifth option at wide receiver in certain packages. Pringle needs more time to develop on practice squad.

The tight end position should be set at the top three spots. Harris will be serving a suspension during the first week of the regular season, so the Chiefs can delay their decision an extra week on Jace Amaro or Alex Ellis for the third tight end spot.

Tim Wright had an excessive amount of drops during training camp practices that never really made him a factor for a spot and lacked the strength to be a blocking tight end.

The Chiefs have a unique decision to make between five offensive linemen. Ehinger provides the highest upside on the roster as a starting left guard but the organization dedicated a majority of his reps during the preseason to the right tackle position where his foot quickness is lacking on the edge.

Andrew Wylie saw the most reps among any offensive linemen in the group. He spent time at both left tackle and the right guard position. He was serviceable at both spots.

Kahlil McKenzie has high upside at the right guard position and the risk of his athletic ability being snatched up by another NFL team is high.

Bryan Witzmann is capable of playing at left guard and filling in at tackle if needed but the team appeared to keep him at left guard and rarely tried him out at other positions on the roster. He lost his starting spot from the previous season and the staff didn't appear interested in finding him an additional spot to rotate.

Jordan Devey did see time at the center position but Erving is capable of being the backup center barring injury and the Chiefs did release him last season before the Patriots game and brought him back later on in the year. Ryan Hunter saw the second most reps that indicates interest on the practice squad. Jimmy Murray's knee injury robbed him of crucial reps that could have earned him a practice squad opportunity.
Out: #70 Bryan Witzmann,  #65 Jordan Devey, #60 Ryan Hunter (Practice Squad), #68 Bentley Spain, #67 Jimmy Murray (Practice Squad) and #62 Ethan Cooper

Nick Jacobs can be found on Twitter: @Jacobs71 and can also be heard on the 4th and 1 podcast brought to you exclusively by 41 Action News. 4th and 1 is available on iTunes, Google Play and TuneInTuneIn.