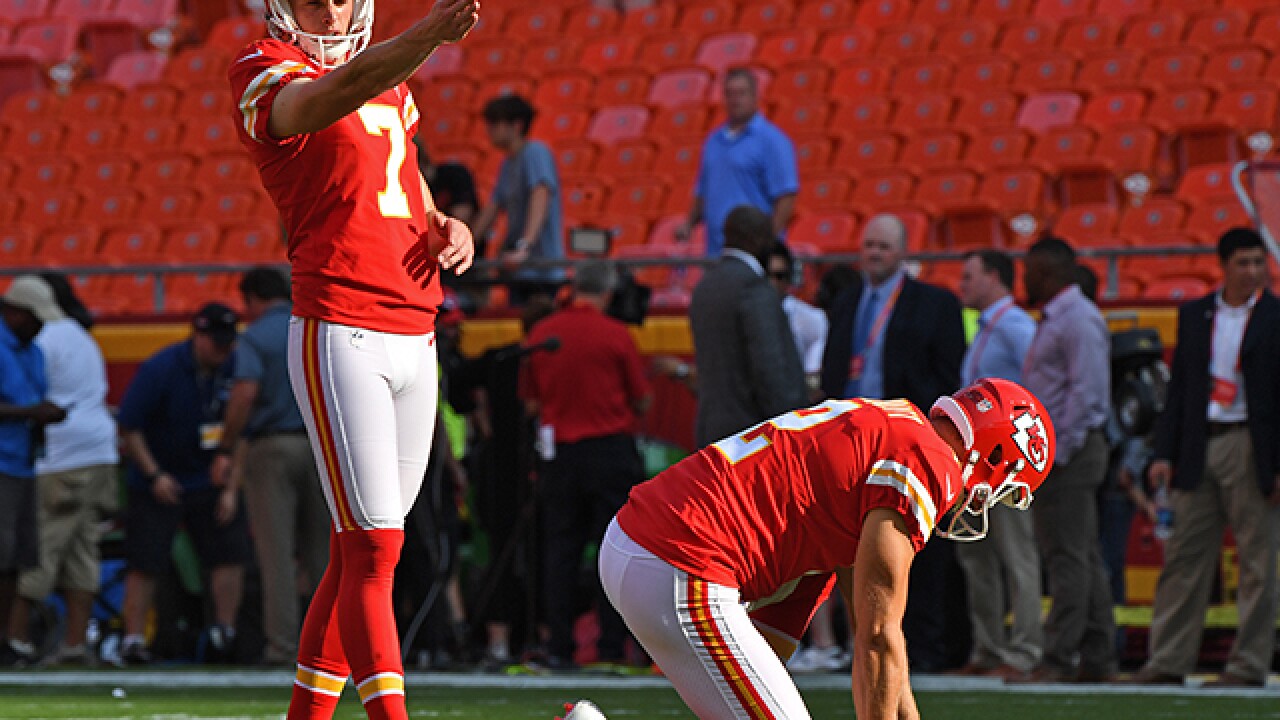 Copyright 2018 Scripps Media, Inc. All rights reserved. This material may not be published, broadcast, rewritten, or redistributed.
Peter Aiken
<p>KANSAS CITY, MO - AUGUST 09: Kicker Harrison Butker #7 of the Kansas City Chiefs lines up a field goal with punter Dustin Colquitt #2 holding during pre-game warmups, prior to a pre-season game against the Houston Texans on August 9, 2018 at Arrowhead Stadium in Kansas City, Missouri. (Photo by Peter Aiken/Getty Images)</p>

KANSAS CITY, Mo. -- The Chiefs wrap up their preseason schedule on Thursday night at home against the Packers. A bigger date could potentially be weighing on the minds of many players on the roster. By 3 p.m. Saturday, General Manager Brett Veach and his scouting department will have to notify the league of the 37 players who will be looking for new opportunities in the NFL.

The 32 teams around the league will potentially waive (3 year’s experience or less) or release (4 year’s of experience or more) the contracts of 1,184 professional athletes. The teams that could potentially have their eye on Chiefs roster cuts: Browns, Colts, Bears, Eagles, Raiders, Packers, Saints, Redskins and Giants.

Here is a potential outlook at the final 53 players along with their snap counts for the preseason:

Saturday, Sept.1:
Teams must reduce their rosters to 53 or less players before 3 p.m. Players with three years or less of experience must go through waivers. Those players can be claimed by any of the other 31 teams in the league. The waiver order is based on the draft order.

Players with four years or more of experience are considered vested veterans. They are not subject to waivers and become free agents immediately and can sign with any team they desire.

Sunday, Sept. 2
The opportunity to claim a player on waivers for the active 53 ends at noon. At around 1 p.m., after all 32 teams have been notified of players awarded to other rosters, teams may begin to sign 10 players to their developmental practice squad.

The Chiefs have some tough decisions ahead on their roster and some holes that could be filled by players being let go of around the league. For some of the players on the bubble, their snap counts on special teams could be the deciding factor.

Nick Jacobs can be found on Twitter: @Jacobs71 and can also be heard on the 4th and 1 podcast brought to you exclusively by 41 Action News. 4th and 1 is available on iTunes, Google Play and TuneIn.