Schedule breakdown: What to expect from the first year of the Mahomes era 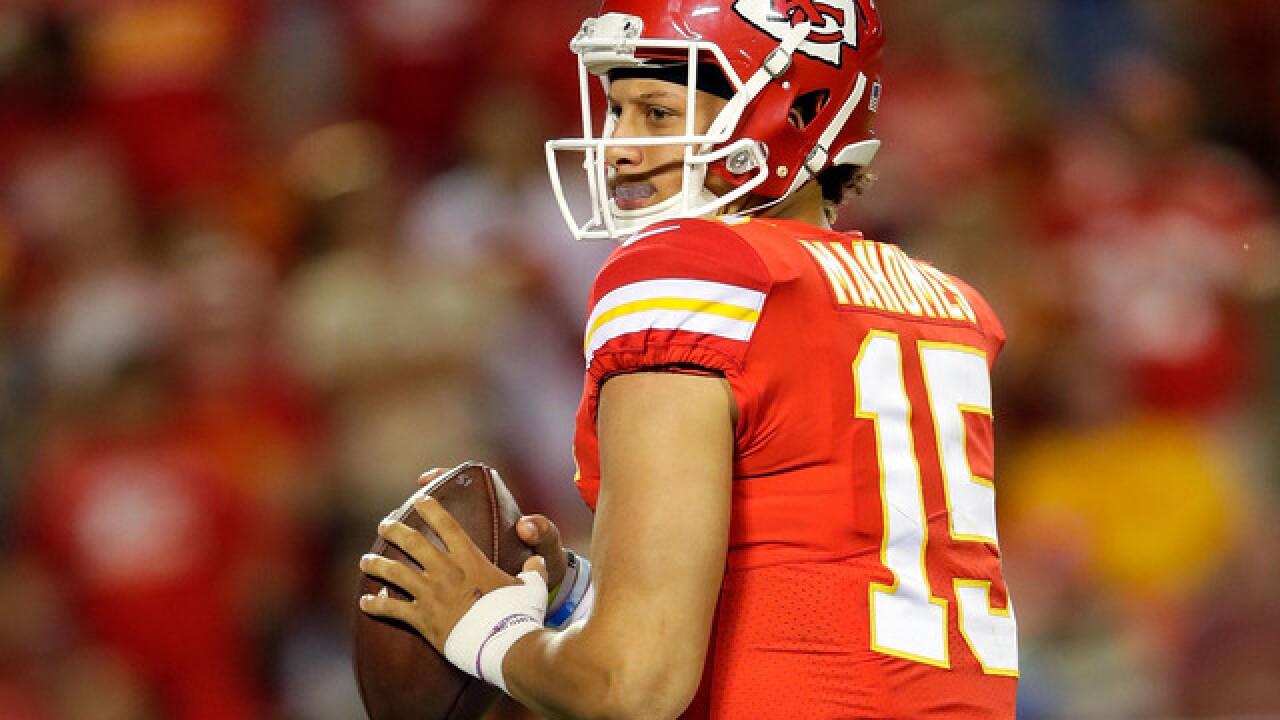 KANSAS CITY, Mo. -- As the Patrick Mahomes hype train steams toward games that truly matter for the first time in his pro career, it feels like a good time to remind the good fans of the Kansas City Chiefs that he’s yet to throw a touchdown pass in NFL game.

That’s not to say Mahomes, who offered a tantalizing peek at his talent during a win at Denver in the regular-season finale last year, won’t be a special quarterback.

Tom Brady didn’t throw a touchdown in either of his first two starts and things have worked out OK in New England.

But given the Chiefs’ schedule for 2018 — it’s frontloaded with road games, rivalry tilts and 2017 playoff teams — some perspective might be important, especially during a brutal six-game gauntlet to open the season.

It won’t take long to find out how steep quarterback Mahomes’ learning curve is going to be as he takes the reins from Alex Smith, who was more effective throwing the deep ball last year than he gets credit for and was traded to Washington in the offseason.

Here’s a breakdown of Kansas City’s schedule. Tally up what you think the Chiefs’ record will be and I’ll offer my way-too-early prediction at the end:

Sept. 9 at Los Angeles Chargers, 3:05 p.m. (CBS)
The Chargers are a trendy pick to end the Chiefs’ two-year reign atop the AFC West. The winner gets the way-too-early inside track. History is on Kansas City’s side given the eight-game win streak in the series.

Sept. 16 at Pittsburgh Steelers, 12 p.m. (CBS)
If you’re the type who equates the Chiefs to Superman, the Steelers have been Kryptonite. Kansas City hasn’t won in Pittsburgh since 1986 and has lost six of seven meetings overall, including the playoff game two seasons ago at Arrowhead Stadium.

Sept. 23 vs. San Francisco 49ers, 12 p.m. (Fox)
QB Jimmy Garoppolo has never lost an NFL game as a starter, going 2-0 with the Patriots in 2016 and 5-0 last season with the Niners after a midseason trade. It’s an ascending team, but it’s also the Chiefs’ home opener — and Mahomes fever will be raging.

Oct. 1 at Denver Broncos, 7:15 p.m. (ESPN)
Kansas City has won five straight games in the series, including the last three primetime matchups against the rival Broncos. How much of a difference will new Denver QB Case Keenum make in the AFC West race? We’ll find out at the site of Mahomes’ first career start and win.

Oct. 7 vs Jacksonville Jaguars, 12 p.m. (CBS)
The Jags’ defense is among the NFL’s best and, with running back Leonard Fournette, a run-oriented offense makes for a team that travels well. Jacksonville was a surprise AFC South champion and reached the AFC Championship Game last season. Will they build off that or fall back?

Oct. 14 at New England Patriots, 7:20 p.m. (NBC)
If you want to wear the crown …? The Patriots continue to set the standard in the AFC. No offense to any of the other games on Kansas City’s daunting schedule, but this Sunday Night Football showdown represents Mahomes’ biggest test in the first half of the season. Can the Chiefs recapture last season’s opening-game magic in the “Best Tight Ends in the World Bowl”?

Oct. 21 vs. Cincinnati Bengals, 12 p.m. (CBS)
Many were stunned that Marvin Lewis returned for his 16th season as the Bengals’ coach. The franchise made the playoffs five straight seasons from 2011-2015, but regressed with back-to-back sub-.500 seasons. Lewis has yet to lead Cincinnati to a playoff win (0-7). This marks the beginning of what appears on paper to be an easier stretch of the schedule.

Oct. 28 vs. Denver Broncos, 12 p.m. (CBS)
Mahomes should be settled in as the Chiefs hit the midpoint of the season and he’ll be facing the same team for a second time in the season for the first time in his career. How will be adjust? Will the offense be humming as many expect or will there be more questions than answers midway through 2018?

Nov. 4 at Cleveland Browns, 12 p.m. (CBS)
The last time Mahomes and new Browns quarterback Baker Mayfield, who was the No. 1 overall pick in the 2018 NFL Draft, shared the same field a bonkers aerial display ensued. Consider the QB performances from Oklahoma’s 66-59 win Oct. 22, 2016, in Lubbock, Texas — Mayfield went 27 of 36 for 545 yards with seven touchdowns and no interceptions, while Mahomes was 52 of 88 for 734 yards with five touchdowns and one pick. We can only hope for a repeat in the first “John Dorsey Bowl.”

Nov. 11 vs. Arizona Cardinals, 12 p.m. (Fox)
Will another young hot-shot QB be on the field opposite Mahomes? The Cardinals drafted Josh Rosen as its signal-caller of the future. Still, that’s just one piece of a franchise in flux. One would assume the Chiefs have the edge here, but … that’s why they play the games.

Nov. 19 at Los Angeles Rams (in Mexico City), 7:15 p.m. (ESPN)
Think Marcus Peters will have anything to say this week? Think Mahomes will be scared to go at him? Seriously, who doesn’t want to see Tyreek Hill line up against Peters then blaze for a go route as Mahomes launches a 60-yard pass. Win or lose, this should be a fun one.

This is well-timed for the Chiefs, who will need the respite for a possible playoff run down the stretch. My philosophy on bye weeks — better a bit later than too early.

Dec. 2 at Oakland Raiders, 3:05 p.m. (CBS)
Philip Rivers won’t be around forever with the Chargers and Case Keenum feels like a stopgap, not a long-term solution, for the Broncos. Will Mahomes versus Derek Carr and the Raiders define the next half-decade in the AFC West? Here’s round one.

Dec. 9 vs. Baltimore Ravens, 12 p.m. (CBS)
Kansas City hopes to remain in the playoff picture at this point with three home games among the final four. If they are, you have to like their chances, beginning with this matchup against the Ravens. How will Baltimore be using Lamar Jackson? That may be the most fun storyline to follow ahead of this one.

Dec. 13 vs. Los Angeles Chargers, 7:20 p.m. (Fox/NFL Network)
If the Chiefs are still in the AFC West hunt, this may decide the division. Will it also be a passing of the torch from Rivers, who’s currently the top QB in the division, to Mahomes? That’s got to be Chiefs fans’ hope and we should have a good idea how good idea just how bright Mahomes’ future really is by this point.

Dec. 23 at Seattle Seahawks, 7:20 p.m. (NBC)
The Legion of Boom has been muted, but that doesn’t mean the Seahawks are going to be a pushover. Despite having a streak of five straight playoff appearances snapped last season, Russell Wilson and Seattle are a tough combo to beat at home in the “No, Our Stadium Is the Loudest Bowl.”

Dec. 30 vs. Oakland Raiders, 12 p.m. (CBS)
Will this be the final game for the Oakland Raiders? It’s possible the franchise will bolt for Las Vegas in 2019 or the Raiders could wait for the mother of all football stadiums to be completed for the 2020 season before packing up shop. Even if the Chiefs aren’t part of the playoff picture, this will be an important game with an eye toward 2019 at the very least.

2018 season prediction: An exciting 8-8 … The defense remains a question, the offensive line has some potential holes and lacks depth and Mahomes almost certainly will have some very un-game-manager-like games — for better and worse — during the upcoming season. With a couple breaks, the Chiefs certainly could keep a three-year playoff run alive? Then again, a tipped pass here or there could lead to a top-10 pick in 2019.