Shaffer: Kareem Hunt only has self to blame 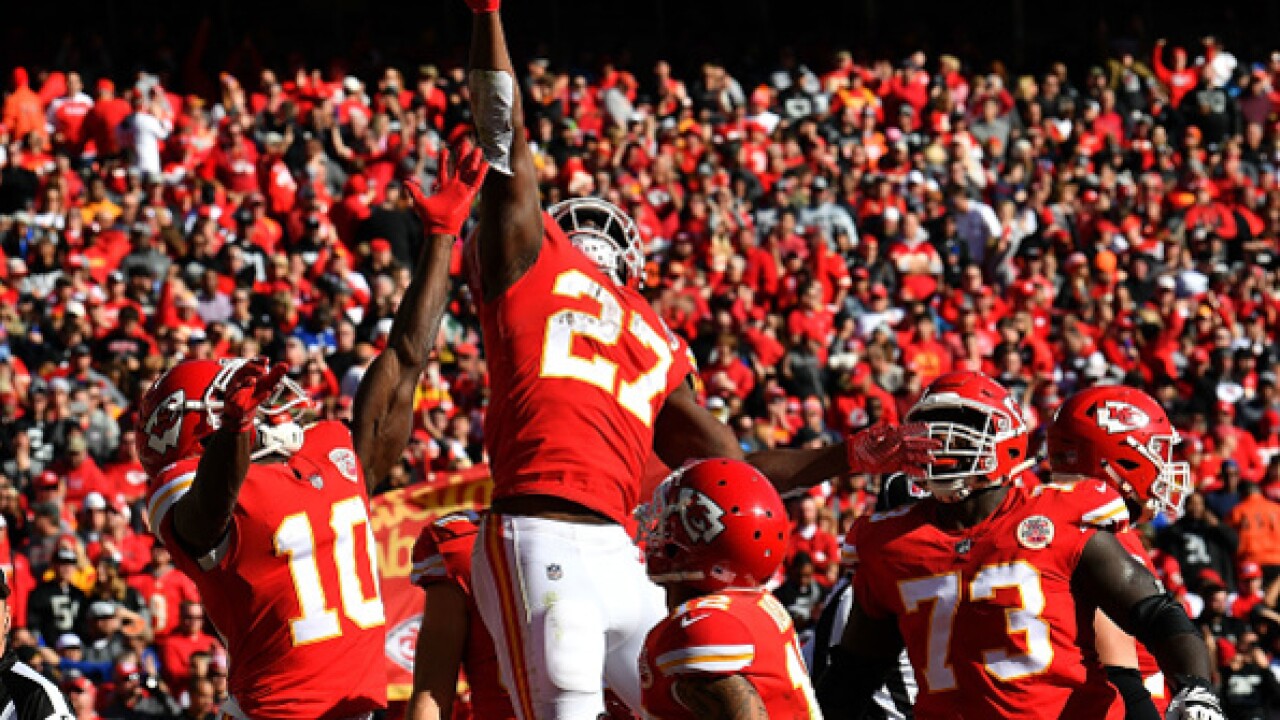 Copyright 2017 Scripps Media, Inc. All rights reserved. This material may not be published, broadcast, rewritten, or redistributed.
Peter Aiken
<p>KANSAS CITY, MO - DECEMBER 10: Running back Kareem Hunt #27 of the Kansas City Chiefs celebrates after a touchdown during the game against the Oakland Raiders at Arrowhead Stadium on December 10, 2017 in Kansas City, Missouri. (Photo by Peter Aiken/Getty Images)</p>

KANSAS CITY, Mo. -- What a week for the NFL, the Chiefs, the Cleveland Police Department, and Kareem Hunt.

Hunt has gone from defending rushing champ on the NFL’s trendiest team to getting wiped off the video game Madden 2019.

Fans can trade in their Hunt jerseys.

The Chiefs won’t even speak of him.

All in seven days.

The fall from grace is the result of TMZ’s hotel hallway video showing Hunt striking, bull-rushing, and kicking a woman during an altercation in February.

It’s a sad story with zero heroes and, in my opinion, just one villain (Hunt). But others find more.

I was shocked to see the Chiefs cut Hunt just like that. I was guessing a 4-6 game suspension. Maybe he’s back for the postseason. Maybe he’s not. The pull to win is often greater than the pull of a moral compass.

Honestly, I’m not sure I would have done that if I was in their position. Without charges? With what they’ve done in bringing in Tyreek Hill, who’s been a model citizen in KC? With what Hunt means to the team?

Had to be a tough decision. So, I applaud the Chiefs for taking a hard stance. They acted swiftly and justly.

Other teams followed suit by not claiming Hunt on waivers.

The NFL will likely come down hard on Hunt with a suspension that will last well into 2019 and maybe all of it with two other altercations on his record just this year.

All sounds good to me.

But while the Chiefs' quick hammer was shocking to me, the response to it was not.

Predictably, there’s been backlash toward the Chiefs/NFL with their handling of this story.

It’s the usual when something negative occurs within a giant organization the size of the NFL.

It just can’t be enough that Kareem Hunt is an abusing hot-head. “Other people must feel my wrath, too!”

The common cry this week has been that the Chiefs/NFL knew what happened (“How could they not?”) and sat on it.

I can tell you how they couldn’t know what happened. When TMZ first released the Cleveland PD’s bodycam video over the summer, we at KSHB were able to gather all of the bodycam video. And I watched about every second of it. Four hours of video (from multiple cops’ cameras). What you heard and saw in those videos was two different stories. A he said/she said. Rather a they said/she said.

It was a lot of drunk people disagreeing on how the incident went down. The woman was crying through the interview and mostly worried about her phone.

The men in Hunt’s party were (as we now know) lying about Hunt’s involvement in it, trying to protect their bankroller, and saying the woman did the instigating.

Hunt’s interview showed him (as we now know) pretending to be asleep and denying any involvement in the altercation.

And that was it. There was no security camera video in those four hours.

The cops didn’t see the security cam video. (They didn’t follow up because nobody wanted to file charges and, frankly, they probably get 50 of these calls a night.)

The hotel was not releasing the video to any media or any other entity. That includes the NFL. It’s the hotel’s video and the hotel’s call, I guess. Especially with no charges being filed.

The NFL requested the video and was denied.

I can say I came away from watching the bodycam video thinking both parties were probably lying a little bit and that Hunt might have been part of a group ushering the woman out of the room, but that it was probably blown out of proportion because he’s famous.

Boy was I wrong.

As we learned on Friday, not only was Hunt involved, he was the only one coming after the woman … repeatedly.

Honestly, I think his career with the Chiefs might have been able to survive the first couple pushes of the woman. But his bull-rush that resulted in her hitting the ground and his subsequent kick of her on the ground let you know of his intent.

It was bad and he deserves whatever punishment he gets.

But, again, that’s not enough for some people, who act like the NFL is less of a football league and more of the FBI, Seal Team 6, and Nostradamus all rolled into one.

“They knew and they could have gotten that video if they wanted it.”

No, they didn’t. And no they couldn’t.

TMZ got it likely because a disgruntled employee wanted some dough. Ask yourself, ‘Why didn’t TMZ get it until now if it was so easily accessible?’

Heck, the Cleveland PD is doing an investigation but only to see how the NFL got the video and information from them without going through the proper channels.

Thus, the effort was there despite the results.

Now, I will agree with people who assert that the only reason Hunt will be suspended is because the security video came out. But not why you think.

If this was the Ray Rice case, the NFL should be ashamed of itself. And should have been. But in that instance, the video supported what we already knew.

The Joe Mixon video supported what was already knew.

In Hunt’s case, the video changed the story.

It changed one of the stories the cops were told.

It changed the story the Chiefs heard from Hunt.

It changed the story I thought I knew.

And I’m guessing it changed the story you thought you knew. (I don’t remember anyone calling for Hunt to be cut in the Summer.)

Does the NFL get it wrong? Yes. A lot. Penalties, Rules, Fines, Inconsistencies in Enforcement, and absolutely in Handling of Violence.

Heck, the Redskins claimed Rueben Foster after the 49ers cut him for allegations of slapping his girlfriend. Washington brass said they “heard a different story” from Foster. I’m sure they did.

But in Hunt’s case, I don’t know what more you want of them. The NFL actually has multiple PIs on retainer in each league city to get out ahead of these incidents. They’re doing their own investigations despite what the real police say.

Remember, Hunt is facing a lengthy suspension with zero charges.

Think about your own employer. Would they do that? Do they hold you to that same standard?