How concerned should you be about Patrick Mahomes and interceptions? 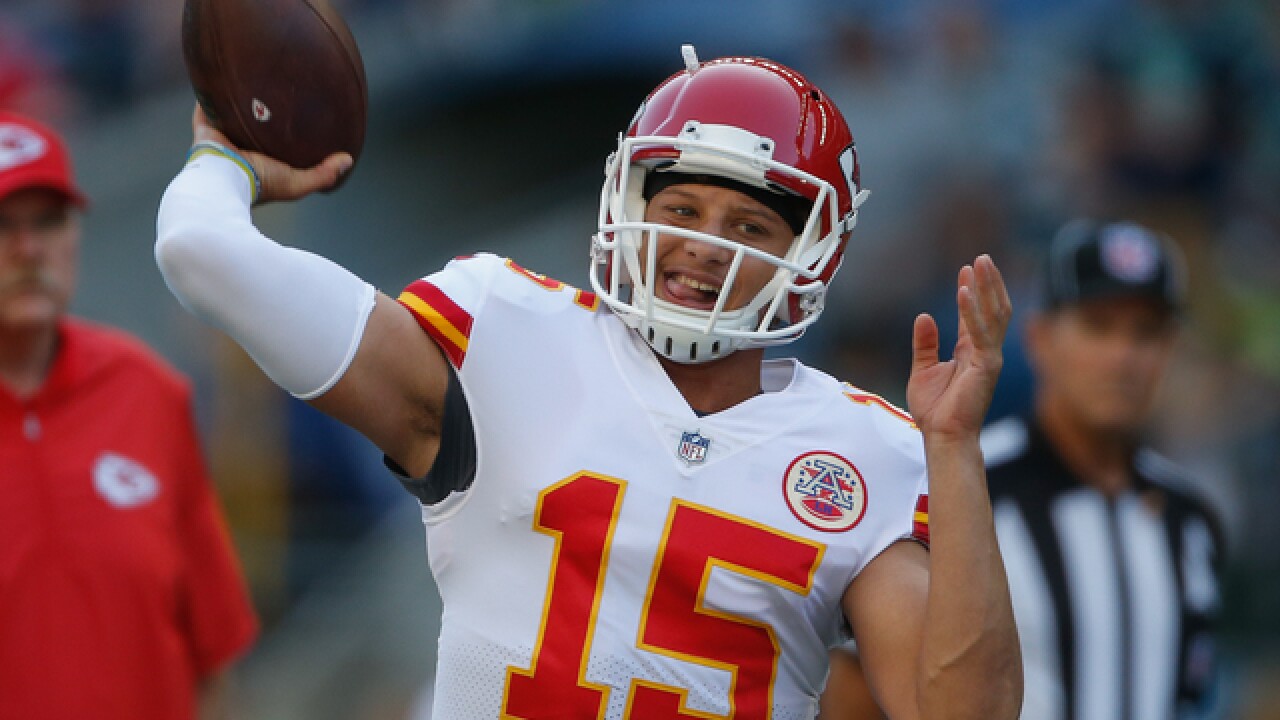 Copyright 2018 Scripps Media, Inc. All rights reserved. This material may not be published, broadcast, rewritten, or redistributed.
Otto Greule Jr
<p>Chieffs quarterback Patrick Mahomes, shown warming up prior to an Aug. 25, 2017, preseason game at CenturyLink Field in Seattle, has a reckless reputation, but what do the stats say?</p>

Obviously, Reid won’t be rooting for Mahomes, who takes the reins from Smith after he was traded to Washington in the offseason, to rack up a boatload of picks.

Still, there seems to be an understanding that the Chiefs are going to see an uptick in aerial turnovers, because he’s got less experience, presumably will force more throws, and is expected to push the ball downfield more.

“Are there going to be growing pains and all that stuff that go on? Sure, he’s a young guy that’s learning the game,” Reid said. “We’re here to teach him and that’s what we’ll do, and he’s here to learn and then go play and have fun doing it.”

While Mahomes has a reputation as a sometimes-reckless gunslinger, his college stats actually paint a slightly different picture.

During his junior season with the Red Raiders, Mahomes only threw 10 interceptions in 591 attempts — a fantastic interception rate of 1.7 percent.

There’s also an argument, perhaps surprisingly, that he’ll be better in the NFL. Nine of the 12 quarterbacks who played in Power Five programs, like Mahomes did, actually saw their interception rates drop moving from the NCAA to the NFL.

Now, it’s up to Reid and his staff to help Mahomes learn when to take chances and when to simply take what the defense is giving.

“That is the challenge for all quarterbacks, though,” Mahomes said. “You want to make the big play. You want to throw a touchdown every single play, but at the same time you have to know it is a process. These defenses are good. You have to make sure you take what they give you and don’t go for the home run every time.

“… If I throw an interception in practice, I have to learn from that and know I can’t do that again. With this training camp, it will help me with that — learning when … I can take chances.”

Reid doesn’t plan to panic if the defense occasionally gets the best of Mahomes during the upcoming weeks of training camp.

“If there’s an interception, we will fix that, but don’t hesitate,” Reid said. “If you see it, let’s shoot it and go.”

In fact, it may actually be a sign of progress. Reid wants Mahomes to play with an edge, keep the big-play aggression he showed in college, and take some high-risk/high-reward shots that his talent allows for and practically demands.

Quarterback wins is a much-maligned stat — and rightly so, because it offers no context for a QB’s play and impact on the game — but it’s also the only one Mahomes professes to care about as he enters his first camp as an NFL starter.

He should benefit greatly from witnessing Smith’s preparation firsthand last season, understanding how to break down NFL defenses and the importance of sustaining drives.

“For me, it is all about playing and winning football games,” Mahomes said. “All the expectations, all the stats, all that stuff doesn’t really matter. If you win football games in this league, you will stay around for a long time and have a ton of success.”

If you're not listening to our new 4th & 1 podcast, you're missing out on the best Chiefs analysis in town. Each week our team breaks down the Chiefs' latest game with insights you won't get anywhere else.

Subscribe today on iTunes or Google Play (and soon on Stitcher)!