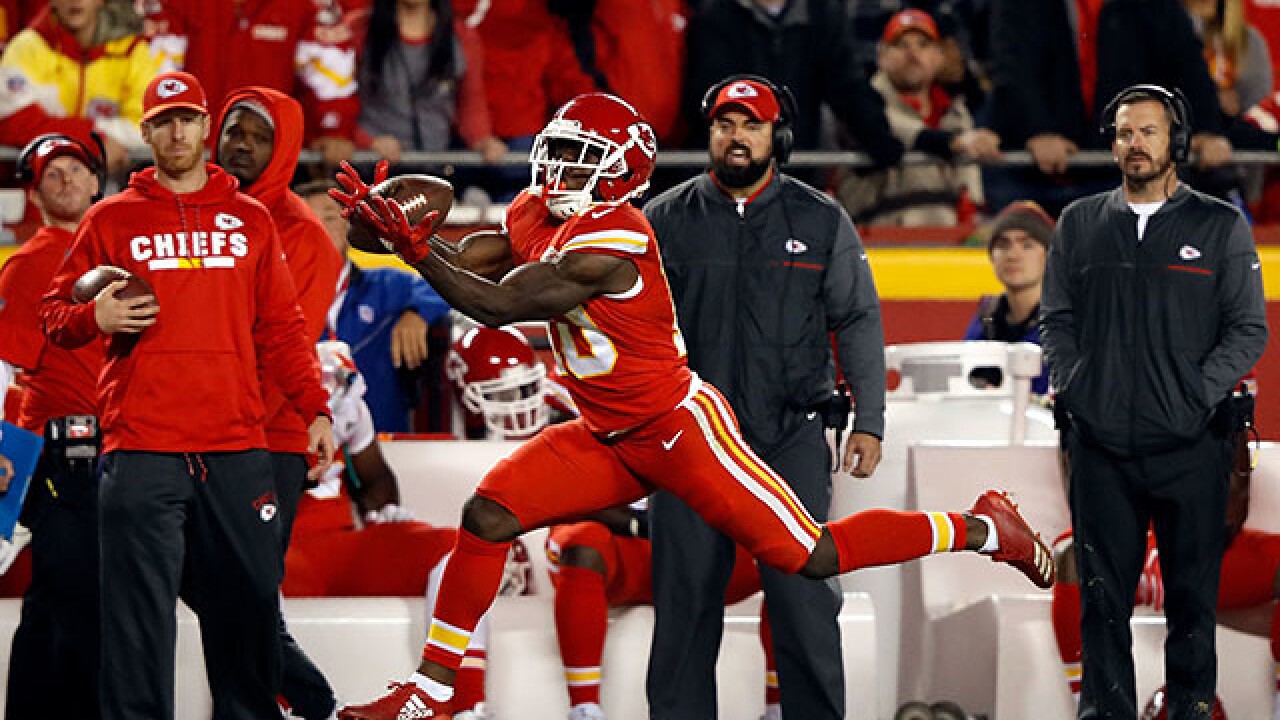 Copyright 2018 Scripps Media, Inc. All rights reserved. This material may not be published, broadcast, rewritten, or redistributed.
Jamie Squire
<p>Kansas City Chiefs wide receiver Tyreek Hill caught a touchdown pass Dec. 16, 2017, against the Los Angeles Chargers at Arrowhead Stadium in Kansas City, Missouri. A domestic abuse charge against Hill in Oklahoma was dismissed and expunged Aug. 15, 2018, after he completed all terms dictated by the courts.</p>

KANSAS CITY, Mo. — Tyreek Hill’s guilty plea in a 2014 domestic abuse case in Oklahoma was withdrawn Wednesday and the case was dismissed and expunged from his record.

Hill, a Pro Bowl wide receiver with the Kansas City Chiefs, was charged in December 2014 with domestic assault and battery by strangulation after an altercation with his then-pregnant girlfriend.

He pleaded guilty in August 2015 and his sentence was deferred for three years.

Additionally, Hill was placed on probation for up to two years, required to complete a domestic abuse evaluation and any follow-up arising from that, complete an anger management course, complete a yearlong batterer’s program, remain in school or keep a job, according to Oklahoma court records.

Hill completed his probation in November 2016 and the court was informed on Jan. 12, 2018, that Hill had completed all of the special conditions.

He was not required to appear in court Aug. 15, when the guilty plea was withdrawn and the case dismissed.

Hill — who graduated from high school in Georgia — started his career at Garden City Community College then transferred as a junior to Oklahoma State, where he had just finished his first season and was a budding star before his arrest.

With the Cowboys, Hill totaled 815 yards from scrimmage with two touchdowns, averaged 24.7 yards per kickoff and 9.5 yards per punt, and scored three special teams touchdowns before he was dismissed from the team.

Hill landed at West Alabama, an NCAA Division II program, for his senior season and was a controversial fifth-round pick by the Chiefs in the 2016 NFL Draft.

Most projections had Hill going undrafted, but Chiefs coach Andy Reid’s roll of the dice paid off.

Hill is a two-time Pro Bowl selection and earned an All-Pro nod as punt returner in 2016. He's also been a model citizen off the field, active with charities and involved in the community.

He has totaled more than 3,200 all-purpose yards and 20 total touchdowns in two seasons in Kansas City after signing a four-year deal worth nearly $2.6 million.

Hill’s ex-girlfriend gave birth to a boy in July 2015 and sued for paternity.

An Oklahoma court determined in February 2018 that Hill was the child’s father and ordered him to pay child support in the amount of $2,700 per month plus nearly $34,000 in back child support.