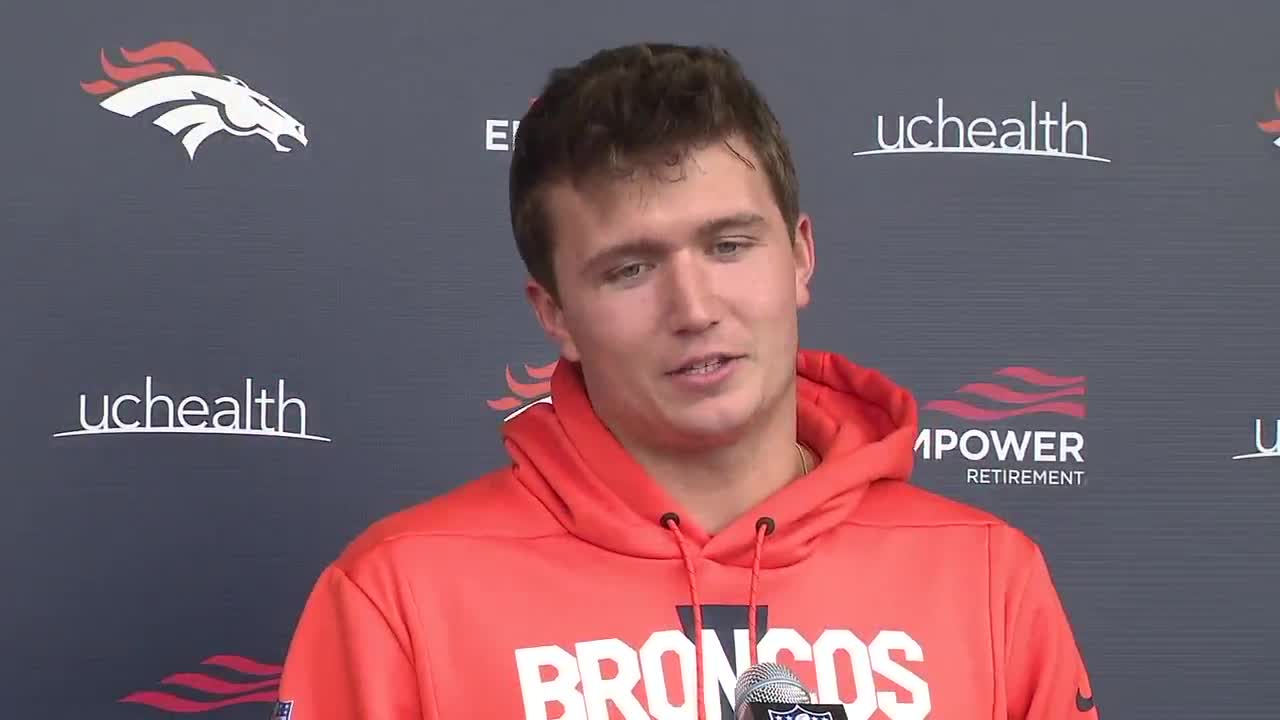 Denver Broncos rookie quarterback Drew Lock plays against his hometown Kansas City Chiefs on Sunday at Arrowhead Stadium. His family is excited for a the milestone moment in Lock's career. 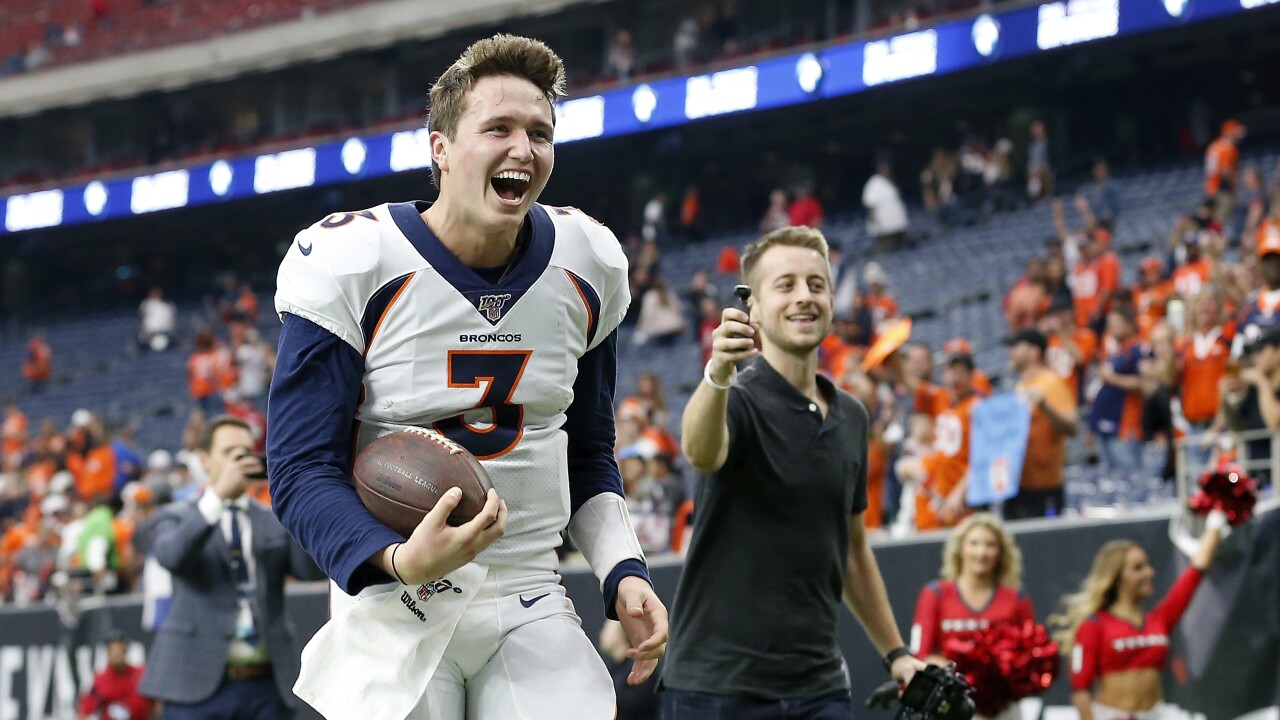 KANSAS CITY, Mo. — Drew Lock is off to a record-setting start to his NFL career.

Inserted into the Denver Broncos’ starting lineup after being designated to return from injured reserve, Lock has won his first two NFL starts.

During a win last Sunday at Houston, Lock became the first QB since 1950 with 300 yards passing in three touchdowns in his first career road start.

He’ll make his second career road start at noon Sunday against the Kansas City Chiefs, who are impressed with Lock’s early body of NFL work.

“There are some impressive throws in the two games,” KC defensive coordinator Steve Spagnuolo said. “A few of them were down by the goal line. There were a couple that the receivers didn't necessarily catch it, but they were just perfect throws. I am thoroughly impressed with what he has done early on here.”

Lock, a Lee’s Summit native and University of Missouri graduate, has plenty of fans in Kansas City, but it’s unlikely many are rooting for a repeat of last week’s success, if it comes at the expense of the Chiefs.

“First thing’s first, when you put on the tape you realize this kid can throw the ball,” Chiefs safety Tyrann Mathieu. “He loves to take shots down the field. He likes to show off that arm strength and throw it out routes. He can throw them there and especially the deep balls. It will be a good challenge for us. Obviously for him playing here, coming back home, he’ll be juiced up and there will be a lot of excitement for him so we’ll have to meet that energy. We’ll have to match that energy.”

Kansas City (9-4) clinched a fourth straight AFC West title with last week’s win at New England, but coach Andy Reid’s squad likely needs to win out — and get some help in the form of another Patriots loss — to earn a first-round postseason bye.

Lock stands in the way of that goal this week.

Here are a few keys to disrupting Lock and spoiling his homecoming:

1. Be ready for the deep ball

Denver should, did at Houston and probably will again try to test the Chiefs deep early in the game for a variety of reasons.

First, it plays to Lock’s strength. He throws an above-average deep, thanks largely to uncommon arm strength.

Second, the deep threat creates fear in the opposing defense. That, in turn, softens the middle for the tight ends and the Broncos’ slot receivers, while also making it a bit easier to establish the run.

Expect plenty of motion as well in an effort to give Lock as much pre-snap information as possible.

Houston did a terrible job tackling against Denver’s receivers during the first three quarters.

That meant a bounty of yards after the catch, which eased Lock’s life immeasurably.

The Broncos’ tight ends won’t be confused with Rob Gronkowski or Travis Kelce — in Fant’s case, at least not yet given his inconsistency — but they are capable of breaking or slipping tackles for big plays.

He ranks third in the NFL with an average of 8.3 yards after catch per reception, trailing only Mecole Hardman Jr. (12.8 yards) and Tennessee wide receiver A.J. Brown (9.4 yards).

Fant had four catches for 113 yards with his first touchdown in more than a month against the Texans.

Despite a prolonged stint on injured reserve after a preseason hand injury, Lock has made significant strides — based on his first two NFL starts — already as a rookie.

Part of the reason Lock slipped to the second round in last spring’s NFL Draft was concern about his ability to process the complexity of defenses at the pro speed.

He developed through high school and college in systems that didn’t require him to dissect defenses at the same level of minutiae the NFL demands.

There are signs that Lock has improved his ability to manipulate defenders with his eyes, though he occasional still locks in on a receiver.

Nonetheless, Lock remains fearless — in a good and bad way — in his ability to beat defenders on arm talent alone.

As much progress as Lock has made as a full-time QB, he may not be ready for Spagnuolo’s brand of chess, at least that’s the hope for Kansas City fans.

As for the aggression part, don’t expect the Chiefs to rack up another eight sacks against Denver, because Lock is more mobile and the Broncos aren’t fools.

But it doesn’t have to be sacks.

Pressure and hits can do the trick against Lock, who is bound to have some residual PTSD from the beatings he took most seasons at the University of Missouri.

Lock tends to fade away in the face of pressure, throwing off his back foot and not driving everything he has into the pass. That creates opportunities for interceptions, especially when Lock lobs a 50/50 throw putting perhaps too much trust in his tremendous arm strength.

Houston’s defense earned a couple such throws, but the coin flips tended to go the way of Lock and Denver’s receivers last week.

5. Be wary of delay, pick routes

Fant got free for a 28-yard gain against Houston after chipping, releasing a step or two and turning around.

No Texan accounted for him and Lock gashed the defense for the mistake.

In short yardage and goal-to-go situations, Denver remains enamored with pick routes, creating havoc with motion into high-traffic areas off the snap to get running backs and slot receivers free.

It’s a staple of most NFL offenses these days, but it’s also the best friend of a relatively green quarterback who needs safe and relatively danger-free to get into rhythm and stay there.

Tod Palmer, co-host of the 41 Action News "4th & 1" podcast, can be found on Twitter: @todpalmer. You can also download "4th and 1" on Apple, Google Podcast, Spotify and Stitcher.