NASCAR's Almirola out of hospital after fracturing vertebra 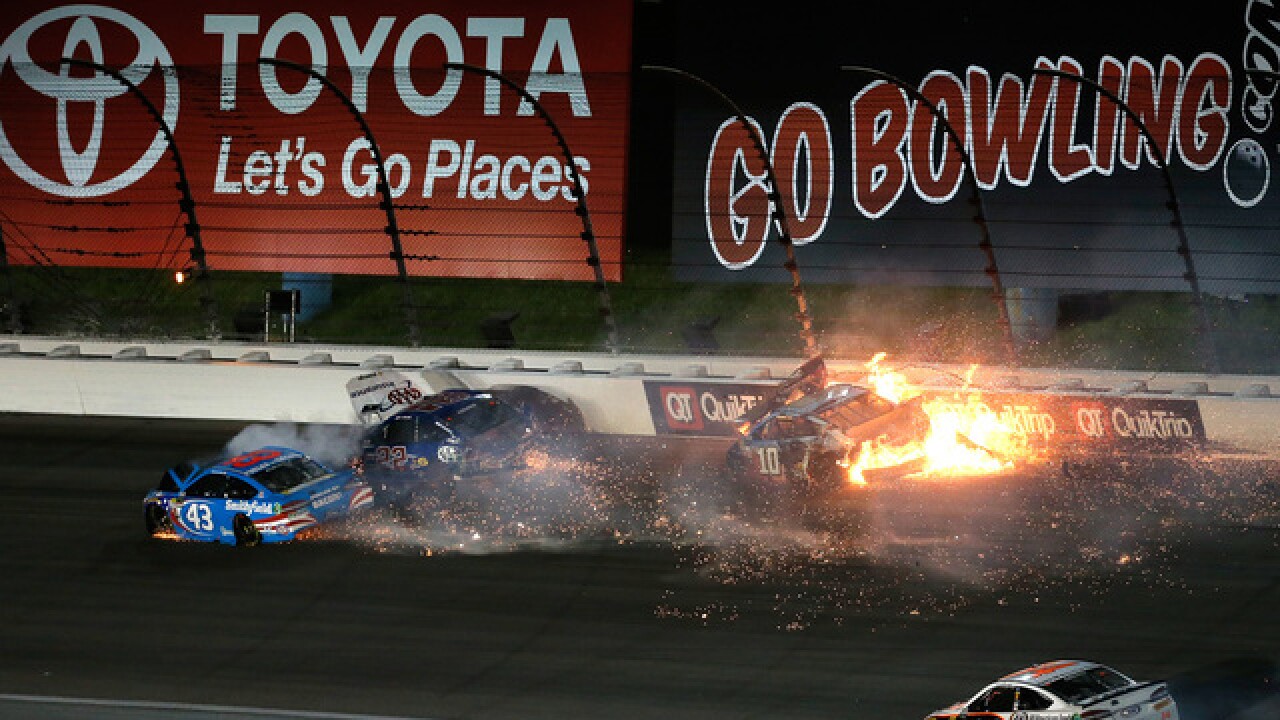 NASCAR driver Aric Almirola was released from the University of Kansas Medical Center on Sunday, a day after he fractured a vertebra during a fiery wreck at Kansas Speedway.

Almirola was trailing Joey Logano and Danica Patrick when a broken brake rotor on Logano's car sent him and Patrick into the wall entering the first turn. Almirola had no time to check up and plowed into Logano's car, the force of the impact lifting his No. 43 car into the air and nearly flipping it over.

Safety crews removed the top of Almirola's car so they could remove him, and he was placed on a backboard and taken to the infield care center. He was then airlifted to the hospital, conscious and alert, and doctors there diagnosed a compression fracture of his T5 vertebra.

Richard Petty Motorsports said in a statement Sunday that Almirola was mobile and returning to his home in North Carolina. He will be examined further by doctors in Charlotte.

The wreck with 67 laps remaining in Saturday night's race, which was won by Martin Truex Jr., cast such a debris field that the race was red-flagged for nearly 30 minutes. That gave plenty of other drivers a chance to contemplate the carnage that had taken place along the wall.

"That was scary," Clint Bowyer said. "You hate to see anybody that you race against and know, know their kids and everything else, get cut out like that. It's scary for everybody."

Almirola's injury is similar to one suffered by Denny Hamlin in a 2013 wreck in California, where he made contact with Logano's car on the final lap and struck the inside wall near pit road.

Like Almirola, Hamilin's car was lifted off the ground by the force of the impact.

Hamlin suffered a compression fracture to his L1 vertebra, which is in the lower back, while Almirola's injury is behind his chest. It wound up keeping Hamlin out of his car for four races, and he needed a relief driver when he finally returned at Talladega.

"Feel bad," Hamlin tweeted after hearing the diagnosis Sunday. "What makes this injury even worse is he will feel ready to return to racing before his body will allow him to."

Richard Petty Motorsports' statement did not indicate its plans for upcoming races. The exhibition All-Star race is Saturday at Charlotte, with the regular season resuming May 28 with the Coca-Cola 600.

The crash Saturday night occurred when the right front brake rotor caused Logano's car to veer suddenly to the left, clipping the right rear or Patrick's car. They both slid up the track and into the wall, and Patrick's car was engulfed in flames before sliding to the apron.

"While I'm OK, one of these times, one of these really big accidents, someone is not going to be OK," said Patrick, who escaped her burned-up car without any injuries. "Aric is not OK and his car looked the best of everybody. You never know when it is going to be the wrong hit."