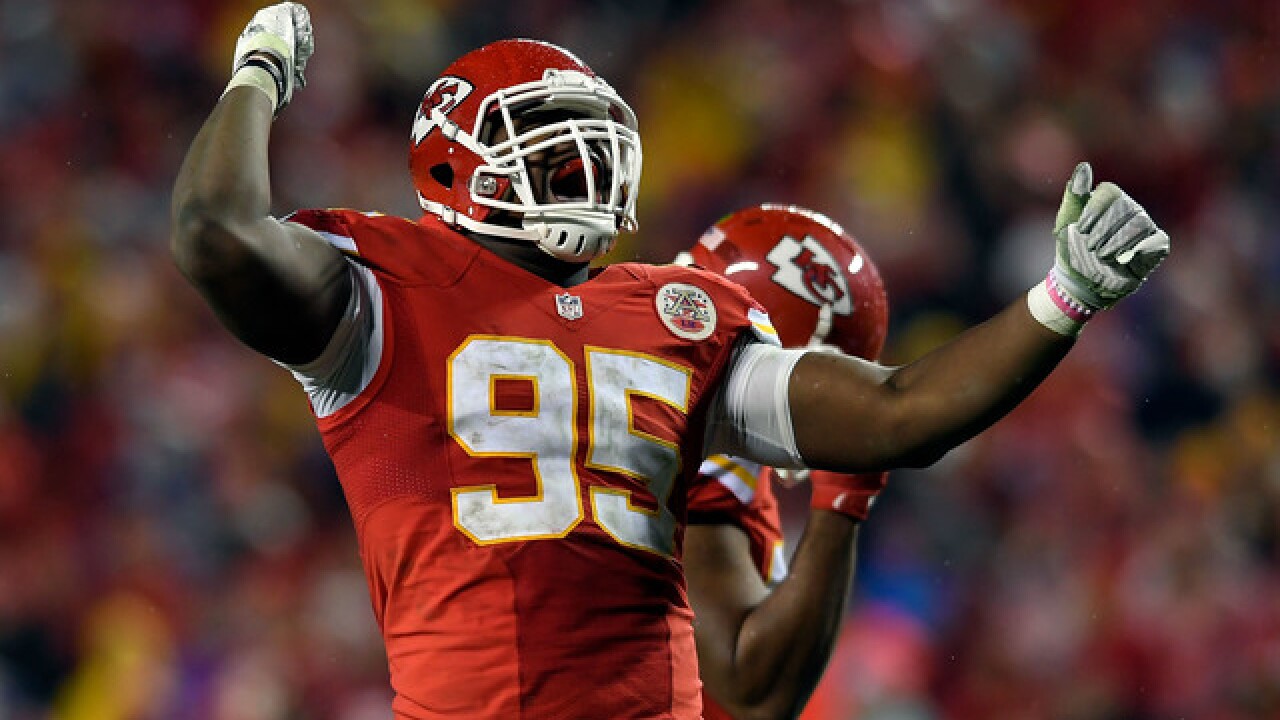 Copyright 2018 Scripps Media, Inc. All rights reserved. This material may not be published, broadcast, rewritten, or redistributed.
Reed Hoffmann
<p>KANSAS CITY, MO - DECEMBER 25: Defensive end Chris Jones #95 of the Kansas City Chiefs celebrates after a play during the game against the Denver Broncos at Arrowhead Stadium on December 25, 2016 in Kansas City, Missouri. (Photo by Reed Hoffmann/Getty Images)</p>

Chiefs General Manager Brett Veach has some tough decisions ahead of him — and limited cap space to work with at this time.

Kansas City will have to make decisions on nearly two dozen free agents by March 18.

If the Chiefs want to place the franchise or transition tag on a player this offseason, that window opens Feb. 25 and ends March 10.

Kansas City likely needs to pay its franchise quarterback, Patrick Mahomes, before the end of the season, so every free-agent decision will need to be calculated with that in mind.

Understanding the complexity of the forthcoming decisions and the desire to keep open a championship window for Kansas City, here are the moves that make sense with the team’s current free-agent crop:

Defensive tackle Chris Jones is a strong presence at the three-technique spot. He is very athletic for his size, a quality pass rusher and commands double teams.

That said, Jones has potentially priced himself off the Chiefs’ roster moving forward.

The reality is the Chiefs already have paid defensive end Frank Clark along the defensive line. It would be tough to pay a second defensive lineman more than $20 million per year.

The overall value for Jones is in the draft picks he could return in a tag-and-trade. That would give Jones the opportunity to get his pay day with another organization, while the Chiefs could fill holes on their roster with cost-efficient picks.

It would be surprising if the Chiefs can get the same return the Seahawks got for Clark last offseason, but it is worth exploring.

Defensive end Emmanuel Ogbah, who was acquired in a trade last offseason, performed well in a contract season before a pectoral injury derailed his season.

He is a versatile defensive lineman who showed great strength and ability to hold up against the run anywhere on the line.

Ogbah also is a solid pass rusher and easily projects as a good rotational presence, if not a starter, opposite Clark at defensive end.

Signed in October, offensive lineman Stefen Wisniewski provided the team a much-needed veteran presence after the release of Jeff Allen, who recently announced his retirement from football.

Wisniewski provided versatile depth at both the guard and center positions. He also was one of the better starters along the offensive line after being inserted into the lineup.

At the very least, Wisniewski would provide reliable depth, if not a solid starting presence along the line.

Defensive end Mike Pennel was arguably the most important, if underrated, signing for the Chiefs during the 2019 sason.

Added to the roster in mid-October, Pennel is a big reason why the Chiefs’ run defense steadily improved during the second half of the season.

A stout defensive tackle who rarely found himself on the ground, Pennel could take on double teams and hold the line of scrimmage. He earned an opportunity to return to the defensive line rotation.

Fullback Anthony Sherman is one of the leaders on special teams and a great run-blocking presence on offense. The Chiefs may not use him on every snap, but he is still one of the better blockers in the league and can be utilized to seal the edge and open holes in short-yardage situations.

Tight end Blake Bell, a Wichita native, provides the team with athleticism and a solid run-blocking presence at the position.

He shouldn’t cost a prohibitive amount to re-sign and could serve as a quality third tight end for the offense.

AT THE RIGHT PRICE

Cornerback-turned-safety Kendall Fuller found a home in the back end of the secondary during the offseason. He could be a quality rotational safety until Juan Thornhill is able to return from a torn ACL suffered in the regular-season finale.

Fuller struggled at cornerback, but he seemed to shined when he is allowed to see the field and attack that football coming downhill from the safety spot. His value is at safety but only at the right price.

He had his issues with holding, especially when receivers would break on their routes.

Breeland’s athletic ability is probably set to decline during the next couple of seasons, but for now he’s a serviceable rotational corner.

Picked up off the scrap heap, quarterback Matt Moore showed toughness during his two starts when Patrick Mahomes was injured and helped the Chiefs stay in prime playoff position as Mahomes recovered.

Moore seemed to be a great sounding board for Mahomes on the sidelines and could continue to be a valuable presence there and in the film room, if retained.

Claimed off waivers in December from Arizona, veteran defensive end Terrell Suggs was a key piece down the stretch setting the edge after the losses of Emmanuel Ogbah and Alex Okafor.

Still, he probably isn’t worth bringing back at anything other than vet minimum in a reduced role.

Before an ankle injury cost him the first half of the season, backup quarterback Chad Henne looked inaccurate during training camp. His salary isn’t worth the price at his age.

McCoy was a much-needed addition early in the season when Damien Williams was struggling with injuries and there were question marks with Darrell Williams and Darwin Thompson.

McCoy provided a reliable veteran who knew the offense, but he also had turnover issues. His time in Kansas City will likely end after one season but he leaves with a ring.

Lee was a low-risk, high-reward trade. He provided an athletic linebacker who could potentially help the team in coverage. Unfortunately, his playing time on defense dwindled as the season went on and the Chiefs will have to look in another direction.

Defensive tackle Xavier Williams, a Grandview graduate, was serviceable depth as a rotational pass rusher. He struggled in run support at times and was outperformed by multiple players in the role.

Williams, who counted $3.68 million against the cap last season, will likely be moving on this season for a cheaper replacement.

Safety Jordan Lucas provided the previous scheme with an athletic safety who had the range to play single-high coverage.

He never found a role in the new defensive scheme, though, and his special teams role can be filled by a younger player with upside worth developing.

A training-camp free-agent signing, cornerback Morris Claiborne was brought in at a time the team needed insurance at the position.

The question marks with Fuller and Charvarius Ward forced the team to add an additional veteran, but Claiborne didn’t provide the Chiefs with a consistent performer and he was sidelined by the playoffs.

Linebacker Reggie Ragland is a great one-gap, downhill linebacker. He has a physical presence and is willing to lay the big hits.

Ragland would be a starter in the 1990s or early 2000s, but his style of play and lack of coverage ability will keep him off most NFL rosters.

The Chiefs had to reduce his snaps on noticeable passing downs.

Wide receiver Demarcus Robinson is an outstanding downfield blocker in both the run and pass. He is fearless in his ability to seal the edge and provide impact blocks that spring his teammates to first-down yardage and much more.

Unfortunately, Robinson still struggles to gain separation against press coverage and had significant drops. He will find a good market in free agency, but his route tree is limited and he is likely more of a serviceable special teams performer than what he will be paid on the open market.

With injuries mounting in the Chiefs’ backfield, running back Spencer Ware was brought back because of his knowledge of the offense after the loss of Darrell Williams.

That probably allowed him to finish his career with a ring.

The Chiefs have invested multiple seasons in wide receiver Marcus Kemp. An injury derailed what could have been an interesting season among the bottom half of the depth chart.

Kemp is a possession receiver and a quality special teams performer, but it will likely be a struggle for him to crack into the top three of the Chiefs’ receiver rotation based on previous reps.

It is where he looks most comfortable with technique and footwork. His inability to provide versatility at other positions might cost him a roster spot long-term.

Tight end Deon Yelder was a decent special teams performer, but he never made a routine impact on offense and the Chiefs should look to upgrade at that spot.