Nick Jacobs: What are Chiefs’ biggest team needs for 2020? 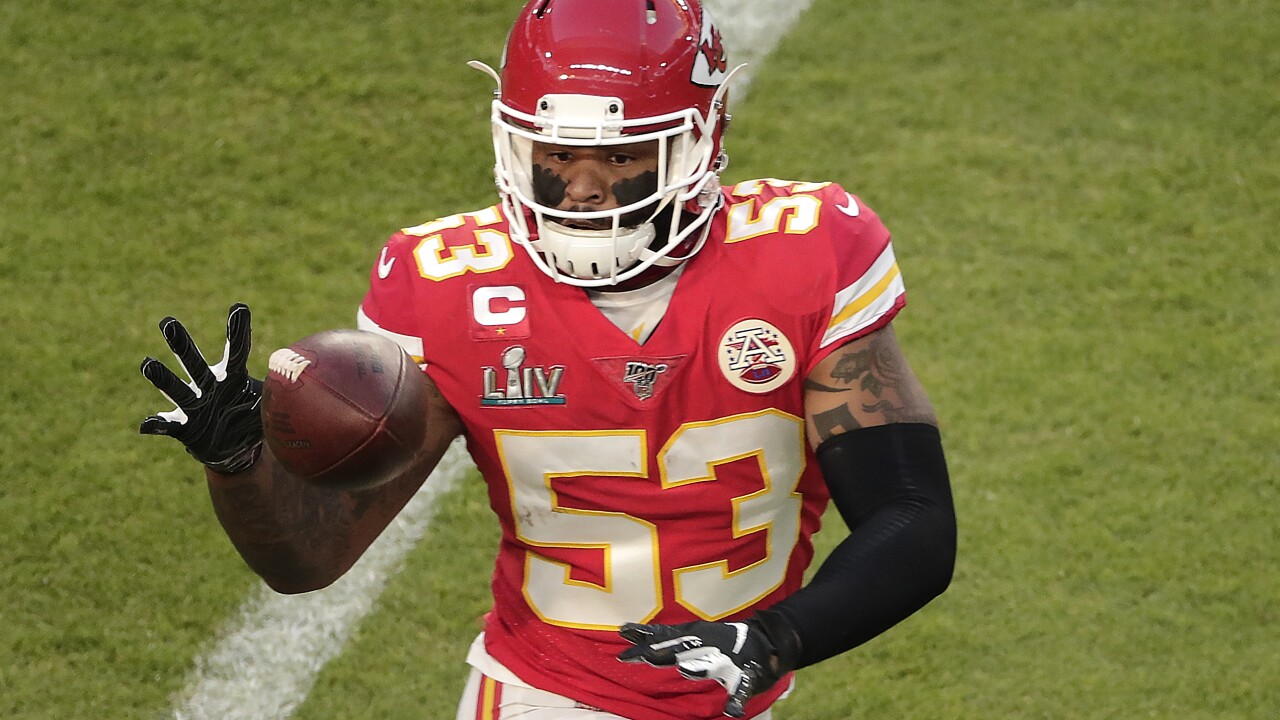 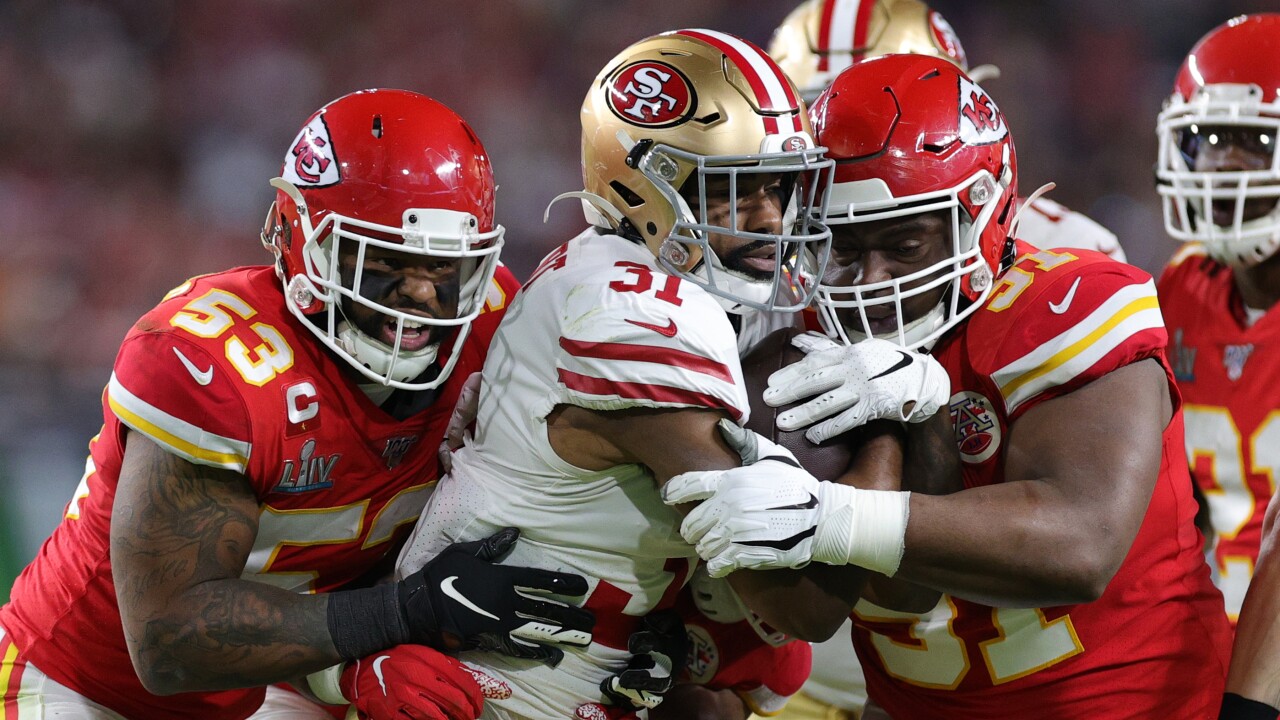 KANSAS CITY, Mo. — The Chiefs made it to the mountaintop during the 2019 season, capturing the Lombardi Trophy after beating the San Francisco 49ers 31-20 in Super Bowl LIV.

If Kansas City wants to maintain that view, it will need to continue building its foundation.

Below is a list of team needs. Some might already be on the roster depending on how their offseason development progresses.

A handful might come from the draft, free agency or a potential trade. But these are the critical needs the Chiefs should seek to address before the regular season kicks off Sept. 10th:

The team gave Anthony Hitchens a hefty contract two years ago and are tied to him for at least one more season because of that contract.

The linebacking group was exposed against the Packers and 49ers this season, so Kansas City will need to improve its athleticism at the position.

The Chiefs will need to find linebackers who can read the backfield quicker, are better pass coverage and remain physical enough to attack in run support. It’s a style of linebacker increasingly coveted across the league.

The Chiefs probably need to add two new starters and depth at the position, if possible.

Defensive coordinator Steve Spagunolo was able to get by this season with Charvarius Ward, Bashaun Breeland and Rashad Fenton, but the Chiefs likely will need to add two or three more corners to the mix depending on Breeland’s status.

If Kansas City can improve substantially at linebacker and corner, it would allow the defense to become extremely versatile and multiple.

The Chiefs need to find additional help at center and guard, especially in the quest to provide its franchise quarterback the best protection in the league to reduce his opportunity for injuries and allow him more time to find winnings matchups against coverage.

Kansas City needs to find a stronger center who can handle one-on-one matchups. But the Chiefs also need to find reliable guards who can pick up and pass off stunts in pass protection while also knocking defenders off the ball when run blocking.

Two possible solutions may already be on the roster in Martinas Rankin and Nick Allegretti.

The Chiefs have speed in Tyreek Hill and Mecole Hardman, but the offense needs to add even more speed with receivers who can win against press coverage while also understanding how to manipulate the voids in zone coverage.

Kansas City might need to find a veteran presence to replace Sammy Watkins, who may be a salary-cap casualty.

Otherwise, the Chiefs need to find a receiver who can provide additional help on short and underneath routes.

It remains to be seen if Kansas City brings back defensive tackles Mike Pennel and Chris Jones, who is set to receive a substantial pay increase, or defensive end Emmanuel Ogbah, whose rookie contract also has expired.

But for the time being, the Chiefs might need to add an additional pass rusher and defensive tackle, if the opportunity arises.

Running back Damien Williams had a postseason for the ages. He earned his roster spot for the 2020 season.

Darrell Williams provides a good power back, if he is able to return to form. It also will be interesting to watch the development of practice squad stashes Mike Weber and Elijah McGuire.

The Chiefs still need to add a dynamic runner who can catch out of the backfield and brings an explosive factor in the open field.

The Chiefs need to find the heir apparents for starting tackles Eric Fisher and Mitchell Schwartz in the next couple of seasons.

Current backups Jackson Barton, Greg Senat and Martinas Rankin might all get opportunities to stake a claim, but Kansas City must continue to look for offensive tackle help.

Fisher and Schwartz both sustained injuries this season and aren’t getting any younger.

Kansas City needs to identify and begin grooming his long-term replacement at the position.

An injury to Kelce would be a big blow to the offense, so the team needs to find a No. 2 tight end who can continue to provide that athletic threat over the middle and, hopefully, enhance it with Kelce on the field.

The Chiefs have their starters for the foreseeable future in Tyrann Mathieu and Juan Thornhill, depending on how he recovers from a torn ACL suffered in week 17.

Daniel Sorensen likely will return to the mix, but Kansas needs to find quality depth capable of filling in in the event of an injury. Ideally, those players also would provide athletic ability on special teams.

Armani Watts and Jordan Lucas struggled to find playing time, forcing the Chiefs to move Kendall Fuller to safety at times to maintain the range and ball-tracking skills needed at the position.

A return specialist isn’t a high priority, but if Hardman sees a bump in his role as a receiver it likely means Kansas City will need to find a couple of reliable returners for training camp.

The Chiefs will have to decide which veteran quarterback is worth keeping as a sounding board for Patrick Mahomes, and which might be most capable of winning a couple games if called into action.

Matt Moore, who went 1-1 as a starter when Mahomes was injured this season, and Chad Henne are both free agents.

Also, it is always good practice to have a third and fourth developmental quarterback for trade purposes down the road.