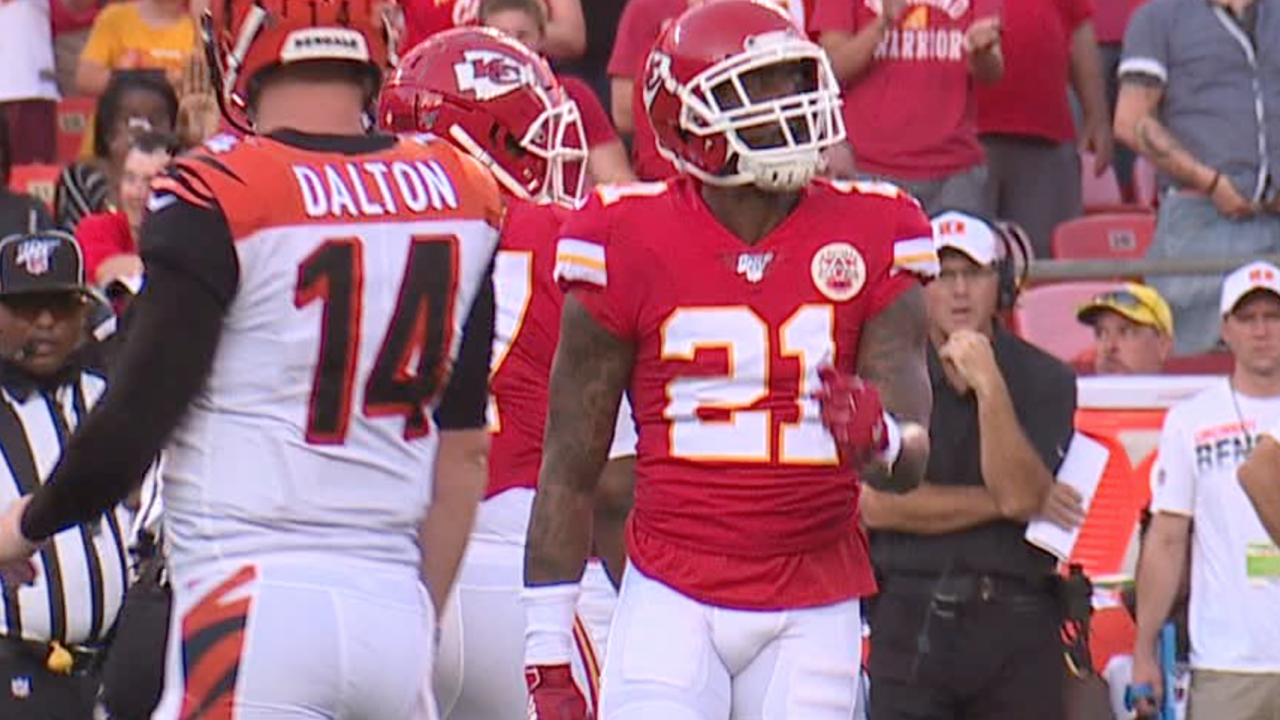 Copyright 2019 Scripps Media, Inc. All rights reserved. This material may not be published, broadcast, rewritten, or redistributed.
Bashaud Breeland

KANSAS CITY, Mo. — The second edition of the 2019 Kansas City Chiefs 53-man roster prediction includes a few tweaks, but it should be similar to the final outlook.

The Chiefs still would benefit from additions at cornerback, running back and tight end, but a recent signing addressed the backup swing tackle position.

Below is a reflection of eight practices and two preseason games to evaluate [Editor’s note: * indicates practice squad candidate]:

Henne is a serviceable backup, but the Chiefs may want to get cheaper at the position in 2020 and beyond.

Undrafted rookie Kyle Shurmur has improved steadily throughout training camp and the preseason. The game has slowed down for him a bit and it doesn't appear to be as overwhelms going through his progressions

Shurmur has been the more accurate of the two quarterbacks vying for the potential final spot. Chase Litton has a strong arm, but remains inconsistent with his accuracy and still locks on to his receivers before throwing the football.

The Chiefs might end up sticking with Carlos Hyde as a backup veteran presence in the running back room, but his lack of ability to play special teams is why Darrel Williams gets the nod.

Darrel Williams currently leads the team in special teams snaps with 18 and showed steady growth during camp. Kansas City should look for a veteran presence to replace Hyde on the open market.

Thompson continues to improve in pass protection and with his vision, which should show around the middle of the regular season.

Smith is a player the team is clearly trying to find a home for on special teams, running back and even wide receiver. If he can help them in two, or all three roles, they will keep him.

The only real decision is if the team elects to keep five, six or seven wide receivers.

Pringle and Thomas, along with Tremon Smith from the running backs group, bring similar athletic ability and would fill similar roles on the roster.

Pringle is the better receiver and route runner in that bunch, while undrafted rookie Cody Thompson has shown promise as a route runner. But the re-signing of Thomas could keep Thompson from the active roster.

Finally, Gehrig Dieter's inability to return to the field so far during training camp likely means injured reserve could be in his future.

The Chiefs could use help at the third tight end position, especially if Yelder's ankle injury keeps him out for a significant amount of time.

Bell showcased his ability in both run and pass blocking during camp. He also showed good athletic ability when he spent time with the first-team offense.

Allen and Wylie will likely be the backup swing tackles with Erving moving back to the interior offensive line.

Allegretti has shown strong hands and a good anchor during practices and in the games. There is a lot of versatility and promise that can't be ignored.

McKenzie may need another season to develop, but Cleveland, Indianapolis, Chicago and Philadelphia might be inclined to add him if he is waived.

Pace Murphy and Dino Boyd show promise as developmental players and likely will land on the practice squad. Ryan Hunter and Jimmy Murray have been given considerable time to develop, but they haven't taken full advantage of their reps.

The Chiefs have a versatile defensive line. Kpassagnon or defensive tackles Xavier Williams and Justin Hamilton would be worth shopping on the trading block for a corner, running back or tight end to a team in need of DL help.

Ivie has shown enough promise in run support to warrant a roster spot over Williams and Hamilton.

The team still appears to be figuring out the right combination at all three positions, but the group itself appears to be the seven listed above. All are capable of playing special teams if needed.

Attaochu provides the most versatility as a pass rusher, linebacker and athletic special teams performer.

This is a position that will need attention through a trade, free agent signing if a vested veteran is released or a waiver claim.

Ward has struggled in zone coverage and with his ability to find the football.

Fields still has to work on his zone coverage ability but has shown promise as an inside and outside corner, while Fenton still needs time to develop.

Herb Miller and D'Montre Wade are in the same boat as Ward with their struggles in zone coverage and finding the football.

Cornerback depth is a position of need for the team.

The safety position looks to be the strongest it has been in years. Lucas and Watts can be strong special teams performers as well as depth behind the top three safeties.

Colquitt has been consistent with his directional punts and hang time in camp.

Butker has shown a strong leg and Winchester's consistency on long snaps is underappreciated.

Undrafted rookie punter Jack Fox has the hang time to find a roster spot in the league, but he needs to work on the distance of his directional punting to unseat a veteran like Colquitt.

The Chiefs have arguably one their deeper rosters during the Andy Reid era, but more cornerback depth is needed to be in an ideal spot.