KU, Bill Self respond to NCAA notice of allegations 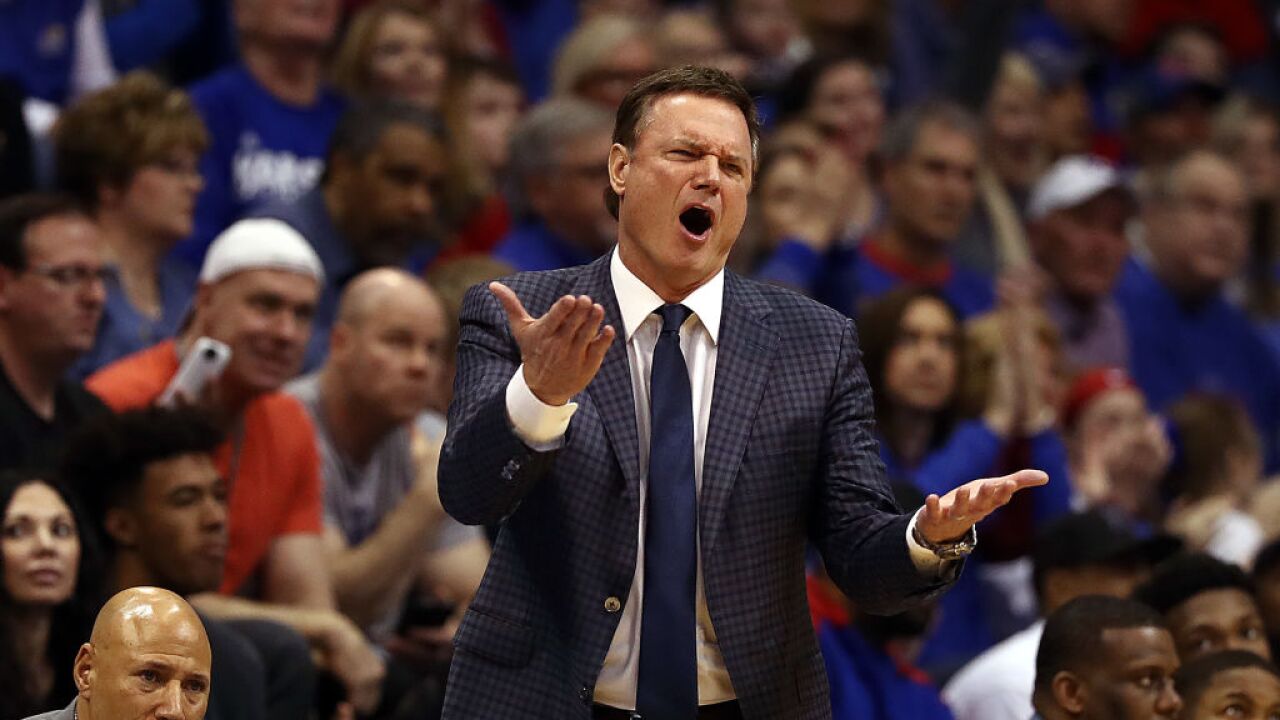 KANSAS CITY, Mo. — The University of Kansas received a Notice of Allegations that could lead to significant sanctions against the Jayhawks men’s basketball team, but the school won't go down without a fight.

The school acknowledged Monday evening that it received an official notice of allegations from the NCAA, detailing seven infractions by members of the KU athletics department.

Kansas responded by mounting a vigorous defense of men's basketball coach Bill Self.

“The University of Kansas has high standards of ethical conduct for all of our employees, and we take seriously any conduct that is antithetical to our values and mission," KU Chancellor Doug Girod said in a statement from the school's Office of Public Affairs. "While we will accept responsibility for proven violations of NCAA bylaws, we will not shy away from forcefully pushing back on allegations that the facts simply do not substantiate. We stand firmly behind Coach Self and our men’s basketball program, and we will continue to work diligently to do what is right.”

Yahoo Sports first reported that the allegations were sent Monday, charging Kansas with a lack of institutional control as well as multiple Level I infractions and “a head coach responsibility charge against coach Bill Self."

“Obviously, we are disappointed in the allegations leveled against our men’s basketball program as well as our self-reported violations from the previous football staff," Kansas athletic director Jeff Long said in a statement. "We strongly disagree with the allegations regarding men’s basketball. We fully support Coach Self and his staff, and we will vigorously defend the allegations against him and our University."

According to the Notice of Allegations, Self "condoned, participated in or negligently disregarded violations" and "has a pattern of noncompliance within his men's basketball program."

Page 1 of KU Notice of Allegations

KU and Self, who the NCAA acknowledged has no prior major violations in a 34-year college coaching career, issued responses Monday to the Notice of Allegations.

"It is already clear from an initial review that the University will fiercely dispute in detail much of what has been presented ...," a statement from the KU Office of Public Affairs said. "The University strongly disagrees with the assertion that it 'lacks of institutional control.'

"In fact, the University believes that the record will demonstrate just the opposite. The University of Kansas takes seriously all NCAA and Big XII bylaws, consistently provides education to its staff members, and monitors its programs to ensure compliance with these bylaws."

The most significant allegations stem from alleged impermissible payments made in the recruiting process to land forwards Billy Preston and Silvio De Sousa, including wire transfers and payments provided at in-person meetings.

Some of those allegations came to light in court testimony related to an FBI investigation into wire fraud and other corruption tied to shoe company executives illegally steering recruits to certain college basketball programs.

He also admitted to paying Fenny Falmagne, the guardian of De Sousa, $2,500 with plans to funnel another $20,000 to De Sousa’s family.

According to the NCAA, Gassanola and his direct contact at Adidas, former Director of Global Sports Marketing for Basketball Jim Gatto, acted as "representatives of (KU's) athletics interests," an assertion that the school intends to challenge.

Other allegations include a quid pro quo "to outfit a nonscholastic basketball team" after former Jayhawks coach Larry Brown had impermissible contact during the recruiting process.

Gassanola, with encouragement from and knowledge of by Self and Townsend, also had impermissible contact during the recruiting process.

The NCAA findings pin much of the blame on Self, concluding that "from the 2014-15 to 2017-18 academic years, Bill Self (Self), head men's basketball coach, is presumed responsible for the the (recruiting) violations detailed," according to the Notice of Allegations.

"Self did not demonstrate that he promoted an atmosphere for compliance based on his personal involvement in the violations" and for his failure to report actual or potential violations he knew about," the Notice of Allegations said.

Self issued a lengthy statement through his attorneys, promising to "vigorously dispute that allegation."

A federal judge ruled that Gatto owed KU and North Carolina State restitution for legal fees incurred and the cost of the scholarships for the players involved in the scheme.

Attorneys Scott Tompsett and William Sullivan, who represent Self, intend to address "each and every allegation" and won't shy away from the Committee on Infractions that hears cases regarding NCAA violations.

"While this process moves forward, Coach Self asks that the Jayhawk Nation support the current team as they work for another Big 12 Conference title, an NCAA tournament bid and ultimately compete for a national championship," Self's attorneys said in a statement.

A statement released by Self through the Office of Public Affairs took a more pointed tone.

First, he acknowledged the "tremendous pressure on the NCAA to respond to the federal court proceedings involving college basketball," which took place in New York earlier this year.

"In its haste and attempt to regain control, the enforcement staff has created a false narrative regarding me and our basketball program," Self said in the statement issued by KU. "The narrative is based on innuendo, half-truths, misimpressions and mischaracterizations. In reality, we all know there is only one version of the truth. The truth is based on verifiable facts, and I am confident the facts we will demonstrate in our case will expose the inaccuracies of the enforcement staff’s narrative."

De Sousa was initially suspended by the NCAA for the 2018-19 and 2019-20 seasons, but won an appeal of the case in May, prompting him to withdraw from the NBA Draft and return to the Jayhawks for his junior season.

The NCAA also detailed allegations of Level II violations by the Jayhawks football program during former coach David Beaty’s tenure, according to the report.

Those stemmed from self-reported violations, involving former video coordinator Jeff Love's role "in making tactical decisions with football student-athletes during on-field practices," according to the Notice of Allegations.

The football violations include permitting an extra coach to work with players during practice.

Beaty was found responsible for the violation. He and Love are no longer affiliated with the Jayhawks football program.

New KU football coach Les Miles said he'll let the school handle the infractions process in a statement: “I am confident in the University’s process leading to the self-reported violations arising from the previous football staff. Our entire focus is on the current season and the culture that we are building here at KU. The future is bright for Kansas Football.”

KU has 90 days to respond to the Notice of Allegations, per NCAA bylaws.