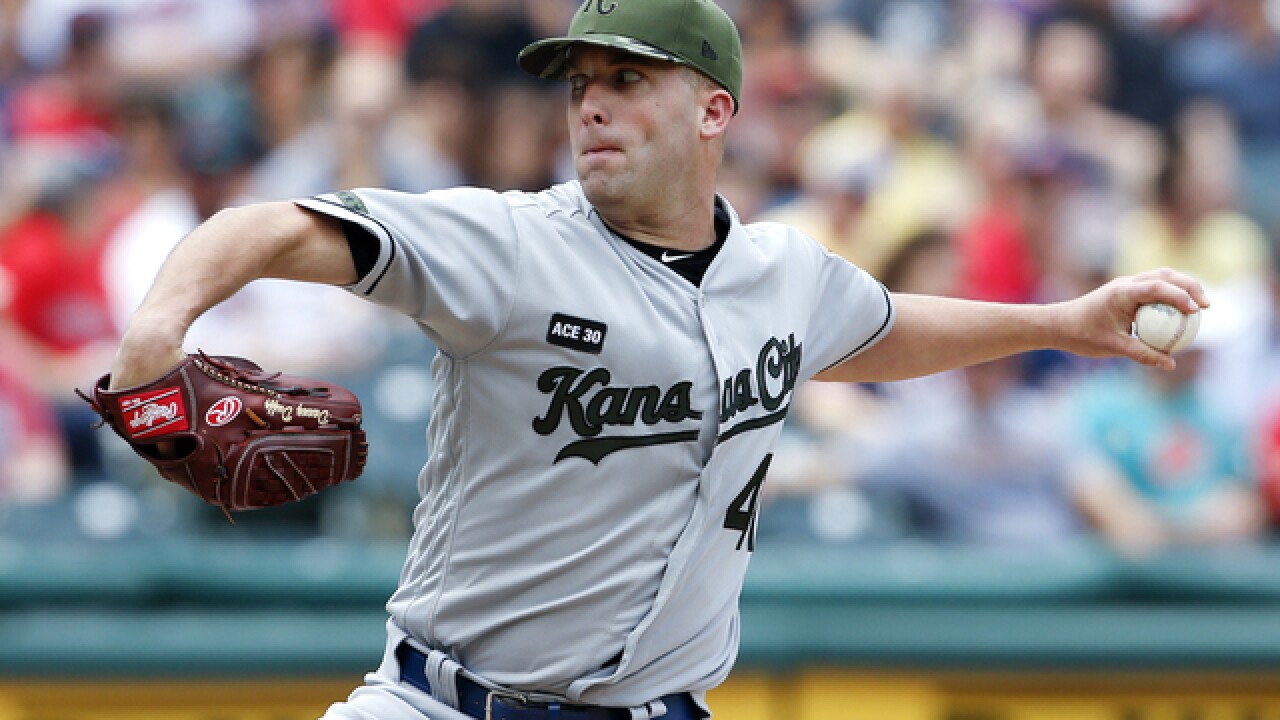 Image copyright 2017 Getty Images. All rights reserved. This material may not be published, broadcast, rewritten, or redistributed.
Ron Schwane
<p>CLEVELAND, OH - MAY 28: Danny Duffy #41 of the Kansas City Royals pitches against the Cleveland Indians during the second inning at Progressive Field on May 28, 2017 in Cleveland, Ohio. (Photo by Ron Schwane/Getty Images)</p>

Duffy missed the team flight from Kansas City to Detroit last night and the team pulled him from his scheduled start as a disciplinary measure.

“He's being taken out of his start tonight as a disciplinary action due to missing last night's flight with the team," Royals Vice President of Broadcasting and Communications Mime Swanson said. "That's all we're going with to this point.”

According to MLB.com Royals beat writer Jeffrey Flanagan, Duffy, 31, took another flight and joined the team in Detroit, where the Royals and Tigers kick off the final road trip of the season — a five-game swing through Detroit and Milwaukee — at 6:10 p.m.

Danny Duffy did get a later flight last night and is in Detroit now. No word yet on who will start.

It’s unclear what caused Duffy to miss the team charter.

"(We're) still getting all the information," Royals manager Mike Matheny said Tuesday afternoon by videoconference. "Where we are really comes down to missing the team flight yesterday. (We're) very happy that he was able to get here in Detroit last night. We had the conversations. still sorting through the details, but at this point, missing that club flight yesterday will take his start today and we'll continue to find out more of the details."

There are "usually a couple stragglers for one reason or another," according to Matheny.

"We reach out, make sure that they're en route and that was not the case," Matheny said. "So, at that point, we decided that we need to get the flight on the way and then we spoke with Danny that he would catch up later, which he did. He got himself to Detroit last night, but we knew he wasn't going to make it on time."

Jakob Junis will start in Duffy's place during the opener of a two-game series with the Tigers, Flanagan reported.

Jakob Junis will get the start tonight instead of Danny Duffy.

He pitched particularly well in his last outing on Sept. 9, the second win in Kansas City’s current six-game winning streak.

Duffy walked away from baseball amid hazing that exacerbated his anxiety and depression early in his Royals career.

Three years ago, he was cited for DUI after falling asleep in a fast-food restaurant drive-thru in Overland Park. He pleaded guilty in January 2018.

Duffy also has been active in the community, supporting pet adoption causes and children with disabilities.

He also brought his former high school team to Kansas City last year for a visit.