Weather Blog - Remember The October Surprise In 1996, 80° Today, & Snowflakes In Our Forecast? 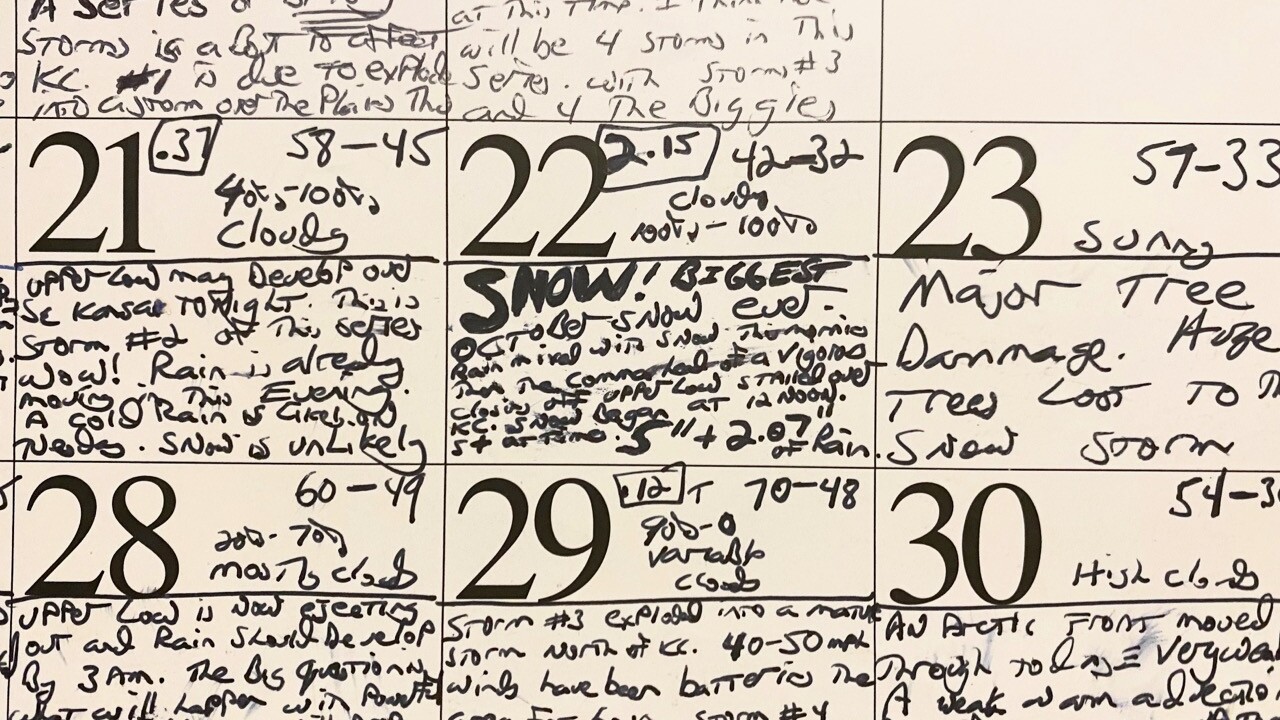 You would have to be close to 30 years old to remember this day in KC weather history. 24 years ago on October 22, 1996, Kansas City had what we ended up calling, "The October Surprise". I remember that day well. I was the morning meteorologist at the time and I was on the air describing a major storm system. Very heavy rain was falling and the temperatures were dropping. There was no forecast for snow the day before, as we said "snow is unlikely". That morning, the storm got strong enough to cause a temperature drop to 32 degrees, which was our first freeze that year, and this happened while the rain was changing to snow, and it became heavy. 5" to 8" of snow fell. Look what I wrote in the weather calendar I had kept since childhood:

I wrote, "Snow began at 12 Noon". Over 2" of rain had already fallen, and when the rain changed to snow, the snowflakes were huge and it accumulated on everything. The trees were full of leaves, like they are today, and the weight of the snow was way to much, and the tree branches came crashing down into power lines and people were without power for days.

In my calendar, I would write up special weather statements. On this day I wrote, "Trees Down Everywhere". Can you imagine? This next surface weather map is one I plotted from 4 PM that day:

The temperature had dropped to our first freeze of the season at 32 degrees. This was at 4 PM in the afternoon, likely the first time our first freeze happened at what would normally be the warmest time of the day. Wow! And, the snow was so very heavy.

This next map shows the upper level flow:

I was in the decade discovery phase of the LRC, and I actually made one of my first winter forecasts that year:

We have learned a lot since then, and the LRC was named by you, the bloggers a few years later in 2002 the year we started the blog. I used to just call it my theory. It is now peer reviewed, published, and we continue to learn more. This year's pattern is VERY DIFFERENT from the one that produced the October Surprise in 1996. Let's take a look.

Okay, that was a nice trip down memory lane. The weather pattern right now is very different from 1996. According to the LRC every year is unique, which means a pattern that has never happened in the past is developing now. This unique pattern is evolving and within a few weeks it will be set. The pattern is cycling, and it is cycling regularly. This cycle is also evolving right now. Anchor ridges and troughs develop and these set up and show us where storm systems will reach their peak strength most often (near the anchor troughs), and reach their weakest strength (anchor ridges). The new LRC is just now evolving, and we will bring you our winter forecast later next month. This year's pattern is unlike any I have ever seen, and we are just around two weeks into it.

There are some models that are showing 6" of snow in our area early next week. Now, I am not buying this, and this is a very different set up than what happened in 1996. This map below shows the American Model, GFS model, showing consistently 6" or more of snow over parts of Oklahoma, Texas, Kansas, and Missouri:

I am sharing this with you just for eye candy, as I am not buying this at all. The European model has just a few snowflakes, which is more likely. Now, as we get closer to Monday and Tuesday, we will see if the pattern is capable of producing significant snow.

There is a slight risk of severe thunderstorms in Iowa. We call this a level 2 risk out of 5. We have a marginal risk of severe weather in that dark green area, and this is what we call a level 1 out of 5 severe weather risk. Rain and thunderstorms are possible after sunset, and the chance arrives in KC a few hours later tonight, likely between around 9 PM and 3 AM. We finally had 0.01" of rain yesterday, our first measurable rain of the month. 018" fell at the station, KSHB. Tonight I am expecting 1/4" to 1" of rain.

The new data is rolling in, and the early models are still showing a snowstorm for Monday. I do NOT buy this at the moment. Why? The models that have the snowstorm are not digging the storm as much. What is "digging the storm" mean? When a storm digs, it dives south and in the upper levels of the troposphere, or around 18,000 feet. Take a look at these next two maps:

The top map shows the RGEM model, and this map directly above shows the Icon model. I then drew in the dashed lines to show the trough axis of each model. The RGEM shows the farther west digging storm, and this is actually very significant for our chance of snow. For it to snow measurably in KC, we will need the storm to not dig that far west. I favor the farther west digging, and this is why I lean against us having the early snowstorm. Now, we must continue paying close attention to the trends on the models. If this does indeed take a turn towards that snowier solution, then we will jump on board in the next few days. For now, I am off that snow ship and we are going with maybe our first snowflakes, but not much more than that, for now!

Thank you for spending a few minutes of your day reading the Action Weather Blog. Have a great day, and watch 41 Action News today and tonight as we describe this fascinating weather pattern and bring you KC's most accurate and most in-depth weather forecast. Have a great day!