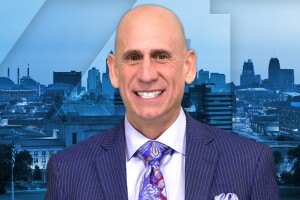 Gary developed a passion for weather as he learned his first words. Growing up in Southern California, clouds and rain fascinated him, and his hobby began around age 5. After high school, Gary went to the University of Oklahoma to change his hobby into a career. In 1985 he got a few breaks, graduated with his B.S. degree in meteorology and started what would become a successful broadcasting career. He got his first big break in 1986 when he became the morning meteorologist at KWTV-TV in Oklahoma City. In 1992, Gary got another big break and moved to KC, where he has now been for more than 25 years.

In 1999, Gary became Chief Meteorologist at KSHB, 41 Action News. He established himself and his weather team as the most accurate in Kansas City and has been No. 1 in forecasting not only during his time at KSHB but since he arrived here in 1992.

An animal lover, Gary has been known to share air-time with his well-known dogs. Windy the Weather Dog was on "The Oprah Winfrey Show" in 2000, and Breezy, Stormy and now Sunny have continued the long tradition of Gary having dogs share some time on the news set each Friday.

By far, the biggest challenge in Gary's life was being diagnosed with cancer in 1999. It was a very rare form called extra-skeletal osteogenic sarcoma. Only six adults a year are diagnosed with the same form of cancer in the United States. The doctors discovered it was very aggressive and recommended Gary undergo extensive chemotherapy to ensure the cancer was removed from his body. Two surgeries to remove the cancer were performed before chemotherapy treatments could begin. Gary is now cancer-free since 2000 and celebrates every day! He shares his cancer experience and his passion for weather when he takes Sunny the Weather Dog with him to his public appearances.

In the 1980s, Gary discovered that the weather patterns were cycling and accurate weather forecasts could be made using this new technology. A peer-reviewed paper was published in 2018, so Gary is now an author of a scientific discovery. He also has written a beautiful children's story called “It’s A Sunny Life.” In Gary’s free time, he works out and enjoys watching his favorite sports teams, the Chiefs, Royals and Sporting KC.