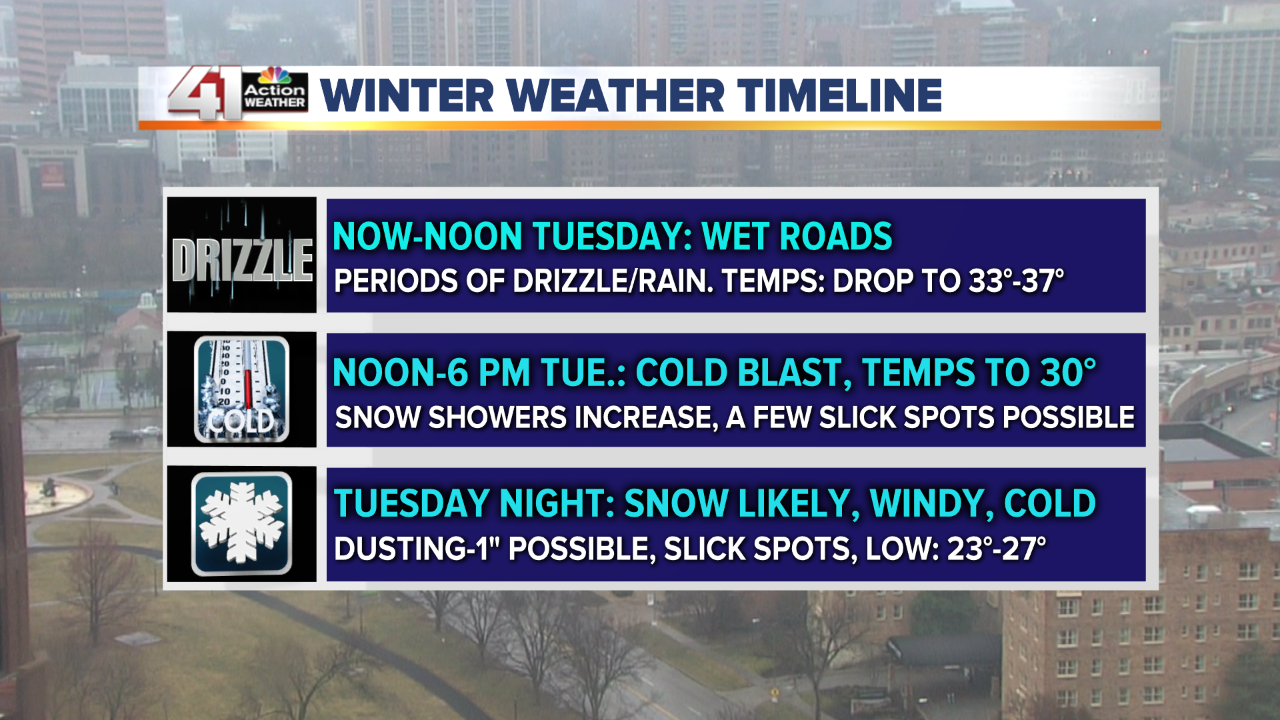 We have been tracking two storm systems the last several days. The first one is moving east across southern Missouri. It has brought our area .25" to .50" of rain, less than we were expecting. The second system is dropping southeast through the Rockies. It will organize in Kansas Tuesday as cold air rushes south. This will increase our chances of snow. The amount of snow we see depends on how this second storm organizes and where it tracks. Let's go through this.

TONIGHT/TUESDAY MORNING: We will see periods of drizzle and light rain. Some snow may mix in by morning. Roads will stay wet as temperatures stay above freezing. We could see a new .01" to .20".

TUESDAY NOON-6 PM: The snow will increase in coverage and intensity during the afternoon with temperatures stuck in the low 30s. If there is enough snow falling, there could be slick spots after 4 PM as the sun angle drops. It will be windy and cold most of the day with north winds 15-30 mph.

TUESDAY 6 PM-MIDNIGHT: It will be windy and cold with snow, mostly light, likely. Temperatures will drop to the upper 20s by midnight. So, roads will likely become slick Tuesday evening even with minimal snow. Wet roads with light snow falling and temperatures dropping to the upper 20s are the ingredients for slick surfaces.

WEDNESDAY MIDNIGHT-6 AM: The snow will end as it remains windy and cold. Temperatures will drop to the mid, possibly low 20s along with north winds 15-30 mph. This will bring wind chill values down to the single digits. The temperatures shown here may be a few degrees too warm.

WEDNESDAY: The storm will race off to the Midwest and Great Lakes. So, we will have decreasing clouds and wind with highs in the 30s. Roads will be slick during the morning and then improve greatly during the day.

SNOWFALL FORECAST TUESDAY-WEDNESDAY: Right now we are expecting a dusting to 1". A few locations may see 1"-2" of snow. On this data the heaviest snow occurs across central/northwest Kansas and central/eastern Missouri. Our area is in the minimum on this data. This is not set as we could easily be in the 1"-2".