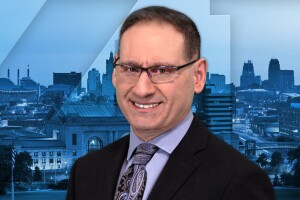 I was born and raised in Kansas City. I have loved weather for as long as I can remember. My mother tells a story that when I was a toddler, I used to tear paper and make it blow around by moving doors back and forth. So yes, I am obsessed with the weather!

I went to the Barstow School from Pre-K through 12th grade and attended college at the University of Wisconsin-Madison, where I received a Bachelors of Science in Meteorology.

I returned home to Kansas City, where I became an intern for another station in town. It is this station where I met Gary Lezak in 1992. I became a part-time weather producer until 1999. Gary moved to 41 Action News and brought me with him in 2000. I have worked at 41 Action News for nearly 20 years as a weather producer and now weekend morning meteorologist! Time is flying!

I met my wife, Edi, in 2004, and the story is interesting. Her brother is the best friend of Gary's partner Andy. Yes, we were set up on a blind date and the rest is history. We are the parents of a 12-year-old boy, Skyler. We are so proud of the young man he is becoming. His obsession with trains has remained the same since he was 3.