Weather Blog - The LRC Is The Cause Of This Wild Weather Pattern: From 86° To Snow, Freezing Rain, Rain, & Record Cold 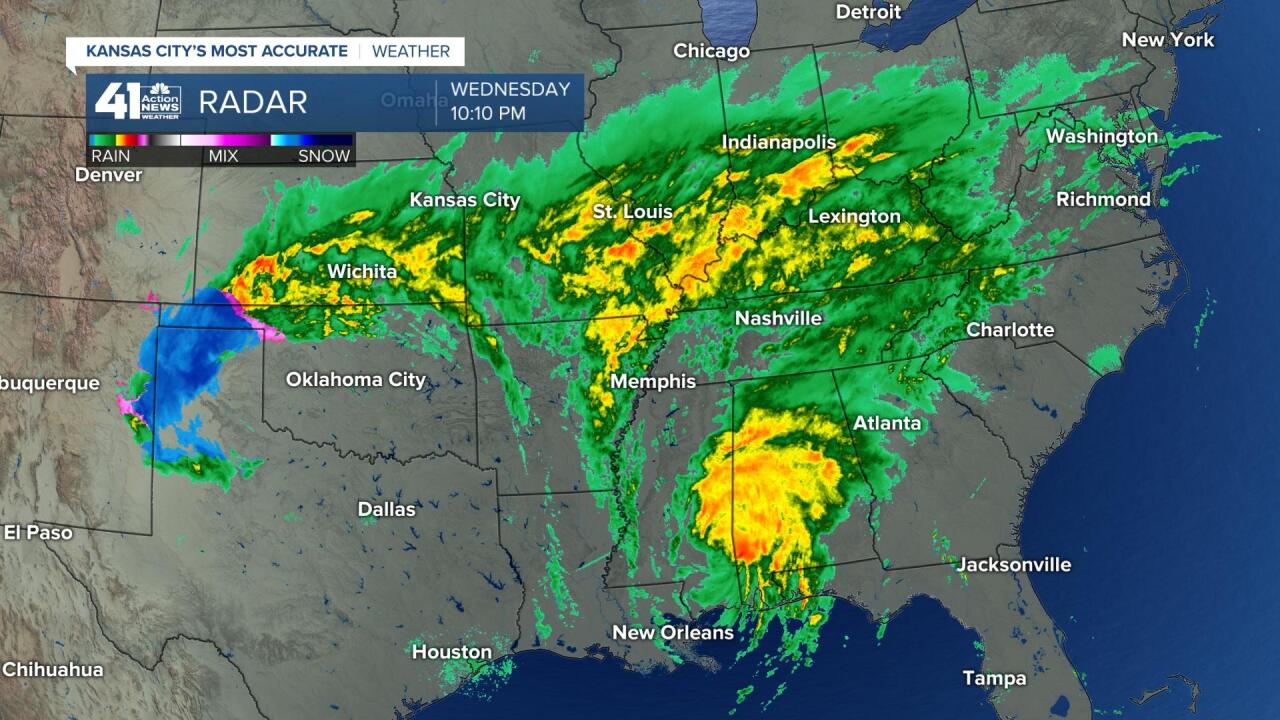 What we have just experienced across the United States, and even right here in KC during the past week snuck up on us in the past week. Just look at what happened in KC since one week ago:

Kansas City In The Past 7 Days:

We just went from 86° a week ago to two of the coldest October days in KC recorded history. Snow, freezing rain, and rain then fell in the past three days. Flooding rains developed south of KC with a hurricane making landfall on the Louisiana coast yesterday as a Category 2 hurricane, the strongest USA land falling storm this late in the season.

Remember this satellite picture, and this radar image below. We will be referring to this later in the winter, next spring, and even next summer. Do you remember Super Storm Sandy? That happened right on today's date in 2012. Hurricane Sandy slammed into the New Jersey shore while a major storm developed inland over the eastern half of the nation. It became known as Super Storm Sandy, and that part of the pattern returned several more times and right on schedule according to the LRC. In fact, New Jersey would have nearly 100 mph winds in severe weather in a future cycle that same cycling pattern year. While Hurricane Sandy was hitting the New Jersey coast 4 feet of snow was falling in West Virginia on October 29, 2012. Well, look at this. While the hurricane was blasting New Orleans, a major snowstorm was in progress over the Texas and Oklahoma Panhandles:

This is very different than Super Storm Sandy, but it is still similar in some ways. The locations are very different. This LRC is very different. What is the LRC? The LRC was named by the 41 Action News bloggers around 18 years ago. It is my theory that describes the regularly cycling pattern. The LRC sets up each year from around October 1st to the end of November, which describes a unique pattern that has never happened before. This is a unique pattern, and I think we can all agree we have never seen anything quite like it. The pattern is still evolving right before our eyes, and we know one thing for certain. For those of you that have been following our blog, well, then you know this part of the pattern will cycle through again in December. What will it look like then? It will be "the same, but different" as the famous Gary England said in 2010 after Oklahoma City and Kansas City had a major winter storm. Gary England, the meteorologist in the movie Twister, saw the LRC, "Lezak, I saw it. It's the same but different". The pattern is cycling regularly and it allowed us to make the hurricane season prediction for it to target Louisiana and Texas this year. It allowed Weather2020 to predict that Florida would likely not have a land falling named storm, and Florida got missed in this historic hurricane season.

Just under two weeks ago a deep vortex, or upper level low, formed over North America. This created the conditions for the cold outbreak, and provided the cold air that helped provide the setting for the early snowfall for the third October in a row. Three very different patterns somehow produced a Kansas City snowfall in October during the past three years. Well, this part of the pattern will return, and it will likely produce much colder air, and likely Arctic blasts during the winter. Remember this October 17th map as it won't just return in the winter. It will also return during spring and summer. This part of the pattern will be the colder part of the cycling pattern.

The strong storm dropped over Tucson, AZ two days ago, and it began interacting with Hurricane Zeta. Now, remember, it is the entire pattern that is cycling, so the warmer parts of the pattern will also return, and one of those is heading this way. These two maps above showcase just two days in the cycling pattern.

This was our snowfall forecast for Monday. Can you see the shark?

And, this is what happened as tweeted out by the NWS:

And, then this is what just happened in Oklahoma, a very rare and historic ice storm:

Thank goodness this didn't happen in KC. Power lines came crashing down. These pictures were taken by Colt Forney near Calumet, OK.

Okay, let's get to the warm up. After a cold and cloudy Thursday, the sun will return with a big warm-up Friday and Saturday, and then this forecast for Election Day:

Expect a warming trend to near 70 degrees by Tuesday or Wednesday. This is also part of the cycling weather pattern, and a reminder that it is still fall. Speaking of still being fall; try to take some time and look at the beautiful fall foliage. We will be reaching peak color in these next two weeks.

Thank you for spending a few minutes of your day reading the Action Weather Blog featuring the LRC. Have a great day!