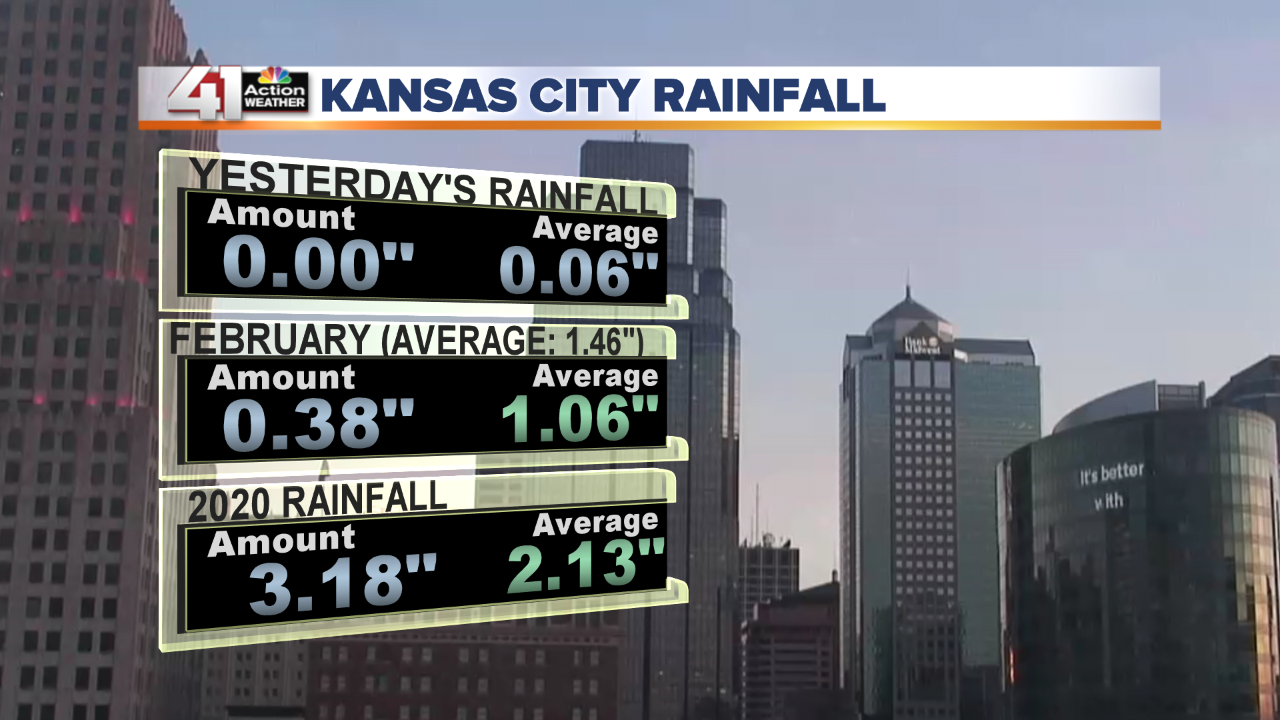 Rainfall for the month is about .80" below average and for the year we are about .90" above average. We are around the same pace as last year for rainfall. Remember last year was the 4th wettest year ever recorded in KC. We average 1.46" for the entire month of February and we will finish the month close to if not over that number.

We are tracking two storm systems between Sunday and Wednesday. The first system is off the southern California coast and it's producing rain across Arizona and southern California. It is pulling up copious amounts of moisture from the tropics. This storm arrives in our area later Sunday. The second storm is moving through the southern Gulf of Alaska. This storm arrives later Tuesday and will interact with the first storm. This complicates our forecast.

Before the first storm arrives we are looking at some nice weather. Let's go through this day by day.

SATURDAY: It will be mostly sunny, windy and mild with highs 55-60. Winds will be south-southwest at 15-25 mph. High clouds will be increasing from around I-70 and south.

SUNDAY: Right now it looks like the rain will hold off until after 4-5 PM with much less wind. So, Sunday will not be that bad of a day with highs in the 50s after lows 35-40.

SUNDAY NIGHT: Rain will overspread the entire area from south to north. The rain may be heavy at times as temperatures drop to 35-45.

MONDAY: The rain will be widespread during the morning before it tapers to drizzle during the afternoon. It will be windy as well. The pink color is mixed snow across northeast Kansas and northwest Missouri. Roads will be fine even if it is all snow with temperatures above freezing. The only way roads get slick is if the snow comes down hard and/or it occurs before 8 AM. The sun angle is too low to help warm the roads before 8 AM.

TUESDAY: This is when the forecast become more complicated. The first storm is lifting northeast towards the Great Lakes as the second storm tracks southeast into Nebraska. The two systems may interact with the second system becoming dominant. There are still questions on how fast the storm will organize and also where it tracks after it does organize. It is these issues that will decide how much or little snow we see. Right now it looks like Tuesday will see rain and snow showers with temperatures in the 30s and 40s. Snow will be increasing across Iowa and Nebraska.

TUESDAY NIGHT-WEDNESDAY: It will become windy and cold for sure. If we are going to have accumulating snow it will be in this time frame. Right now it does not look like a big snowstorm for us, but we need to watch this closely as nothing is set yet.

RAINFALL FORECAST: Right now we are expecting a two storm total of around 1" of rain and melted snow. This would mean we finish the month just below average rainfall. We average 1.46" during the whole month of February and some locations may see that much rain the next 5-7 days.

Have a great weekend.