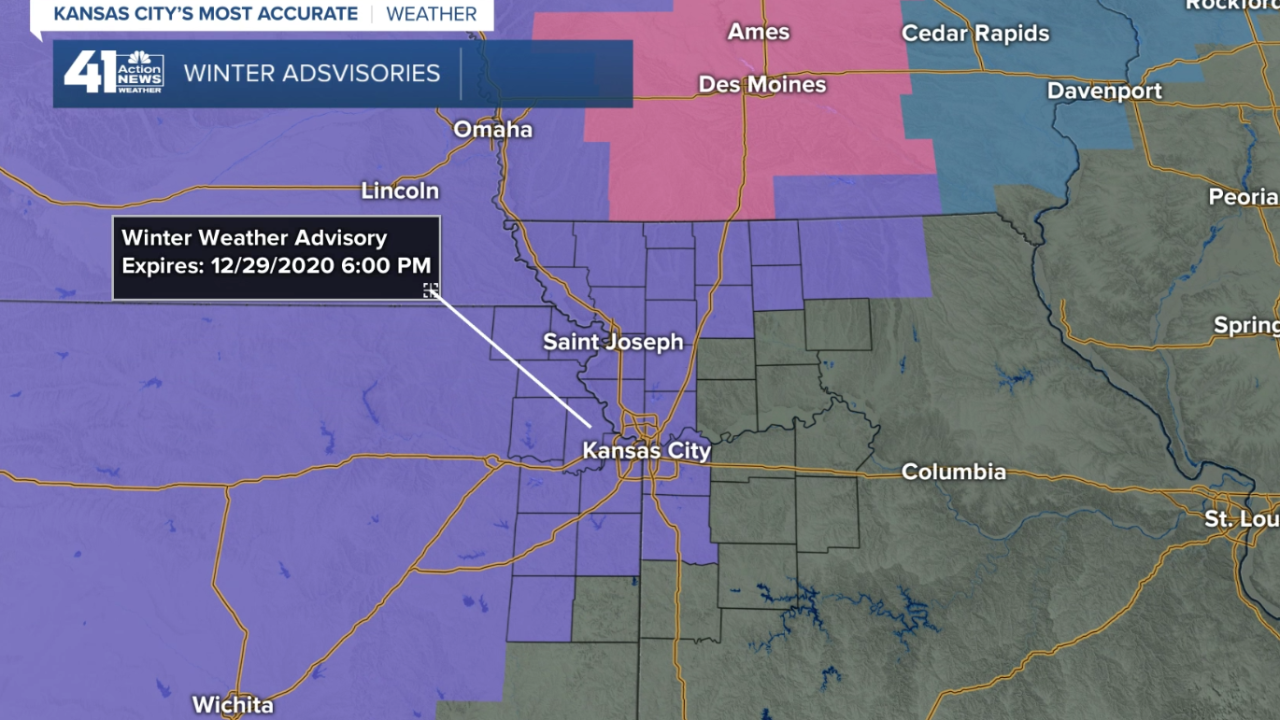 Two winter storms will likely affect our region this week. The second one is looking rather significant, and the first one may be significant for a few hours. A WINTER WEATHER ADVISORY has been issued for Tuesday:

The entire KC metro area is in this Winter Weather Advisory for Tuesday. Warmer temperatures will be drawn in during the day and it will likely rise above freezing Tuesday afternoon or evening. Before that happens some icing of around 0.10" is possible which would cause slick conditions on untreated surfaces, and there is a chance of less than 1" of snow if it starts early enough. The amounts may be higher north of KC.

It has been extremely dry during the past few months, and any forecast of around 1/2" liquid is a nice thing to see. We really need a good drink of water, and there is a good chance we will receive between 0.25" and 0.75", with a few spots possibly getting a bit more. Let's see if we "break the ice" with the first round of precipitation in the morning.

The timing of Tuesday's storm system is interesting. If the precipitation arrives early, then it is more likely to begin as snow. But, if it waits until 9 AM in the morning, it is more likely to begin as sleet of freezing rain with just a bit of snow. Why? Warmer air above the surface is being drawn in from the south, and conditions for snow will fade as we go through those first few hours of the day. But, before 9 AM, it does appear that it will be cold enough for snow or sleet first.

This model shows the precipitation solidifying into a broad band of snow on the leading edge, changing to sleet and freezing rain as that warmer air begins spreading above us. If it begins as snow, it would really accumulate fast, but there is a lot of question on when this will begin. Just three hours later, and it won't be as impacting. If this is at all accurate, then early Tuesday could be a mess for a few hours.

And, then we have an even stronger storm due in later this week, and it forms in Mexico. Take a look:

The Mexico storm is forecast to lift north, being forced out by that second Arizona storm, which is a kicker (a storm that dives in forcing the other storm to kick out). This track would place the KC metro area in the heavy snow on Friday morning. But, this track is far from certain at the moment. We will look deeper into this storm today and tonight on 41Action News.

There is, quite obviously, a lot to analyze and showcase to you on our weathercasts. Follow our twitter feeds, mine is @glezak, and on Facebook.com/GaryLezak. I will try to do a Facebook Live tonight!

Thank you for spending a few minutes of your day reading the Action Weather Blog. We will be analyzing the new data and bringing you KC's Most Accurate Forecast today and tonight on 41 Action News. Have a great beginning to the last week of 2020.