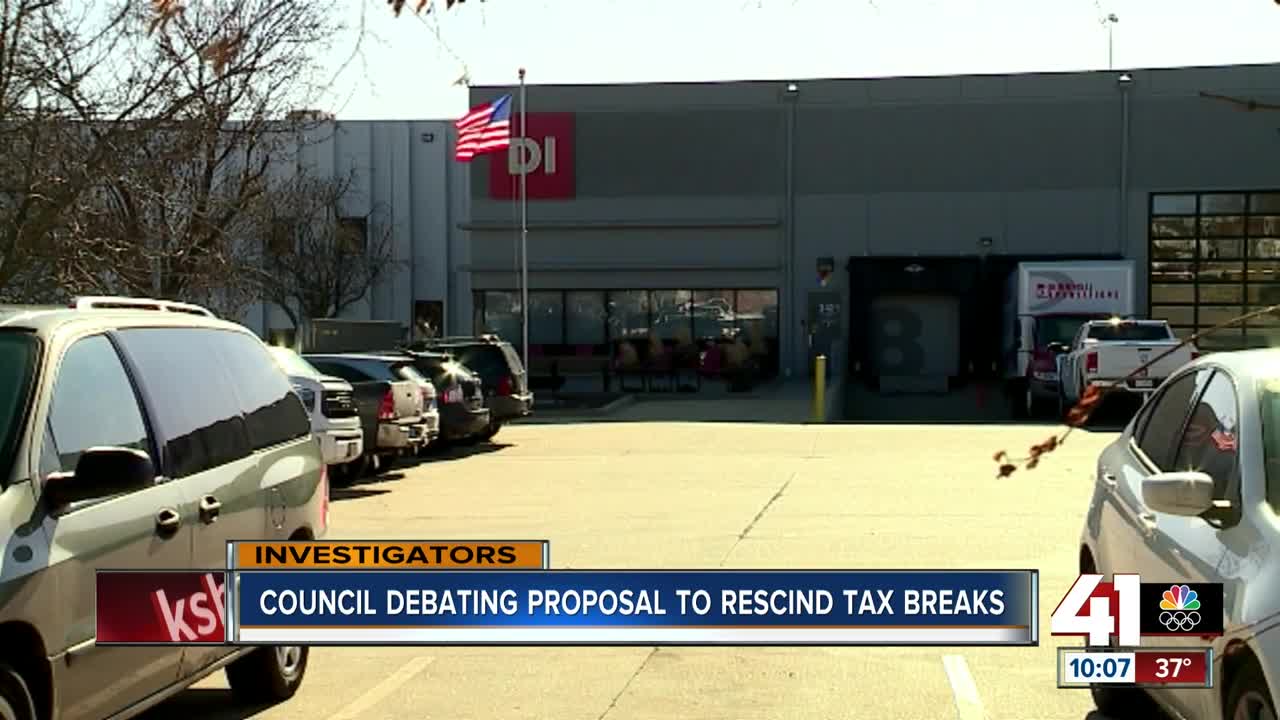 New concerns have emerged about numbers used to determine a potential 10-year property tax break for an Overland Park company. But a vote to rescind that tax break was defeated Monday night after nearly two hours of discussion. 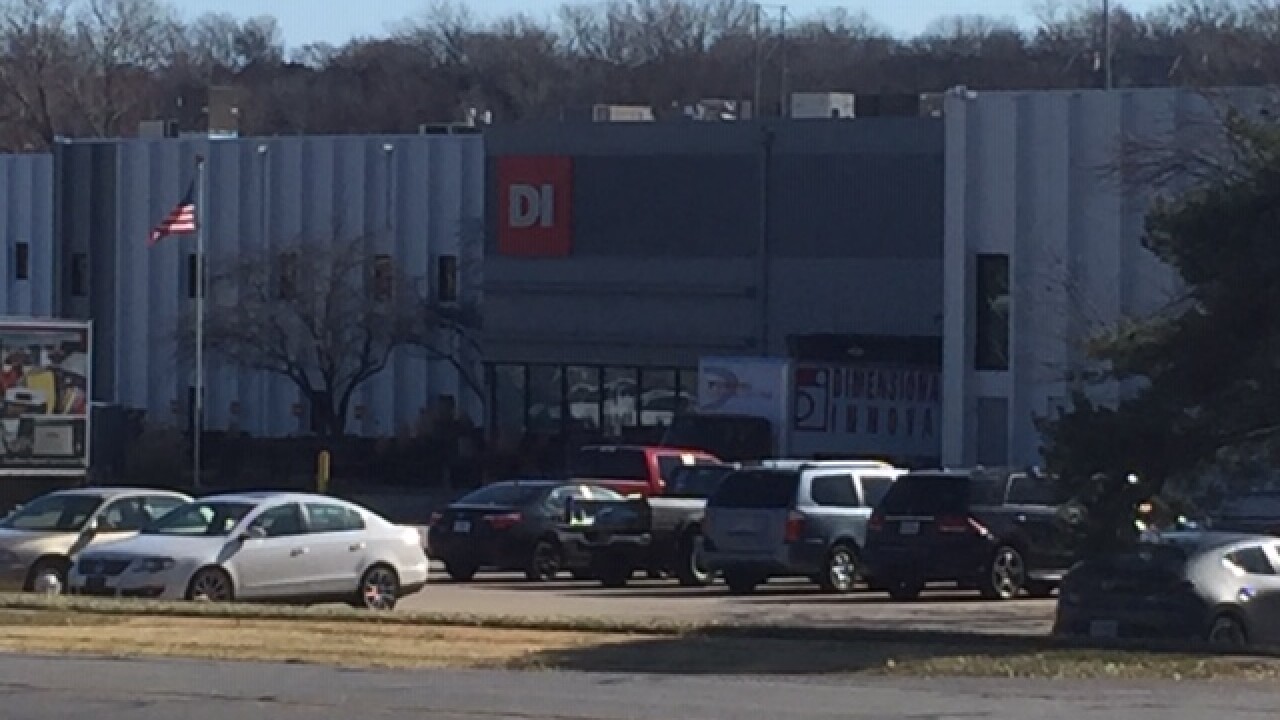 OVERLAND PARK, Kan. — After a heated - and sometimes personal - debate that stretched more than two hours long Monday night, the Overland Park City Council voted down a motion to rescind a tax break proposal for a local company by a margin of 7 to 3.

At issue is a potential up to 65 percent property tax break over ten years for Dimensional Innovations, a high-tech architecture/decorating firm in the northern most corner of Overland Park.

New Councilman Scott Hamblin began the debate with a presentation about why he believes the analysis of the tax break proposal the council approved in December was flawed.

However before Hamblin started, Overland Park Mayor Carl Gerlach criticized Hamblin for not getting a copy of the presentation to council members before Monday afternoon.

Gerlach argued, in order to be open and transparent, Hamblin should've shared the presentation with the council on Friday or Saturday.

One new key point Hamblin raised during his presentation are the numbers Dimensional Innovations presented to the city about promised new hires.

Hamblin says based on the numbers provided, it means the company wouldn’t be eligible for the tax break until the sixth year of the 10-year tax break period.

Dimensional Innovations promises to add at least 225 new jobs to its Overland Park facility with an average salary of $75,000 over the next 10 years.

A resolution the Overland Park City Council passed in December before Hamblin was sworn into office, stated Dimensional Innovations would be eligible for a 50 percent tax abatement once the company adds at least 147 new jobs. The company would then be eligible for up to a 65 percent tax break once 225 jobs are added.

Based on the company figures provided, Dimensional Innovations estimated 147 new jobs would be added in six years, and 225 jobs at the end of the 10-year tax abatement period.

However, the same resolution showed Dimensional Innovations getting the 50 percent tax abatement in its first year with only adding 37 new jobs.

And the resolution shows Dimensional Innovations receiving the 65 percent tax break starting the second year after – by the company’s own estimate – adding only 60 new jobs.

Dimensional Innovations currently also rents a Lenexa office where some of the company’s employees work.

However, at the December Overland Park City Council meeting, Dimensional Innovations’ Finance Director Tyler McLenon said, “Over the 10 years, it would be 225 additions to Overland Park and that’s really separate from the crew at Lenexa.”

For that reason, Hamblin said he wonders how the company is reaching the necessary job additions to meet the tax-break thresholds in years one and two as listed on the resolution.

In response, Gerlach said the year to year job number performances would be negotiated as part an additional city agreement with the company called a Payment In Lieu of Taxes or PILOT agreement.

Specifically, Gerlach said if the company doesn't meet specific year to year goals in the PILOT agreement, Dimensional Innovations could lose the tax break for that year or subsequent years.

However, the terms of the PILOT agreement haven't been negotiated yet.

Hamblin says he's concerned Dimensional Innovations could simply consolidate its Lenexa employees with an expanded Overland Park facility and claim those Lenexa jobs are new to get the tax break.

According to an email Overland Park City Manager Bill Ebel sent to Hamblin, a council vote to rescind the December tax break resolution would be the only option for overturning the council’s approval.

However, both Hamblin and Councilman Faris Farassati claimed there might be a vote Monday night to block Hamblin’s presentation to the council and a rescind vote.

Gerlach did indicate there was some concern the presentation might be out of order.

However, the presentation went forward.

Farassati in an email to Gerlach prior to the council meeting voiced his concern that “any procedural maneuver attempting to block or interrupt this presentation would result in the obstruction of the constituents’ right to be informed. Farassati also wrote that doing so would be in opposition to the “spirit of a transparent and responsive government.”

Farassati says he believes that email made the difference in allowing Hamblin to make his presentation.

In addition to the jobs and tax break concerns, Hamblin said there are unanswered issues with adding sidewalk and road improvements around Dimensional Innovations.

In a meeting with council members, Ebel told them those additions would be part of the yet-to-be-negotiated-or-approved PILOT agreement the city would have with Dimensional Innovations.

Hamblin pointed out in the current approved resolution, those infrastructure improvements are listed as having no cost to the city.

He and Farassati claimed those improvements could run into the millions of dollars at the cost of improvements to other parts of the community.

Also, Hamblin said as part of the funding Dimensional innovations plans to borrow for its expansion, the company requests $350,000 to buy the property at 3415 Merriam Drive.

Hamblin's presentation was met with sharp, and at times, personal rebukes from other council members.

Councilman John Thompson asked Hamblin if he did the presentation for the benefit of Overland Park residents or for himself.

Other debate focused on whether Dimensional Innovations should qualify as a chemical manufacturer as is noted in the cost benefit analysis for the tax break.

That designation means several hundred more spin off jobs were calculated to be created when Hamblin argued they shouldn't be.

Hamblin in his presentation also questioned a claim Dimensional Innovations will bring 3,500 out of town visitors a year to its refurbished plant who would spend money at Overland Park hotels.

Roughly two hours after Hamblin began his presentation, there was a motion to end the debate.

But it was defeated so other council members could have their say.

The most passionate remarks came from Councilman Chris Newlin in a prepared presentation of his own.

Specifically Newlin said he was "deeply troubled" by the rescind motion and said it sends a chilling message to Overland Park businesses.

Newlin argued if the city didn't partner with businesses, Overland Park could lose major tax contributors and residents would suffer with higher taxes and fewer services.

Following the debate, only Hamblin, Farassati and Gina Burke, who orginally voted in favor of the resolution in December, voted to rescind that resolution.

The seven other council members in attendance voted against the rescind motion.

After the vote, Hamblin said he didn't make the presentation to take away Dimensional Innovations tax break.

Instead, he wanted the Dimensional Innovations to re-do its application and the city to resubmit more accurate numbers to the state for a cost benefit analysis.

Farassati said he heard no debate questioning Hamblin's specific numbers and said the city needs to change the way it does business with corporate tax breaks.