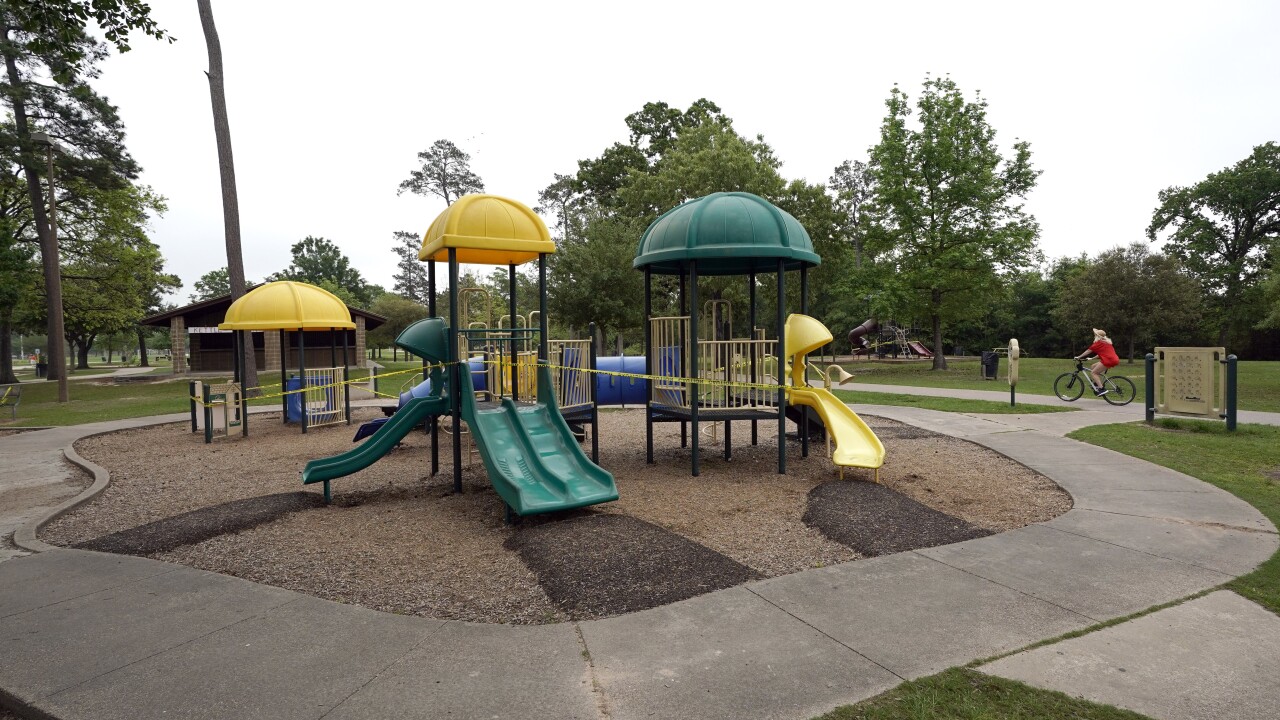 Copyright 2020 Scripps Media, Inc. All rights reserved. This material may not be published, broadcast, rewritten, or redistributed.
David J. Phillip/AP
Playground equipment is cordoned off Wednesday, March 25, 2020, in Houston. A stay-at-home order was issued Tuesday for Houston and Harris County residents to help fight the spread of COVID-19. The new coronavirus causes mild or moderate symptoms for most people, but for some, especially older adults and people with existing health problems, it can cause more severe illness or death.

KANSAS CITY, Mo. — Using playground equipment at many Kansas City-area parks is now on the list of prohibited activities amid the COVID-19 pandemic.

During the last two days, the KC Parks, the Johnson County Parks and Recreation Department and the cities of Blue Springs, Independence and Leavenworth have announced closures of park playgrounds among other locales.

The Parks Department of Kansas City, Missouri, said Wednesday that its basketball, tennis and other courts also are off limits for 30 days, but the parks remain open for walking, jogging, biking and other activities.

Blue Springs issued a similar order Wednesday, closing the playground at its city parks, which remain open for biking and walking to benefit “the physical and mental health of our community,” the city of Blue Springs said in a press release.

Park water fountains and restrooms are closed, so Blue Springs wants to be sure park-goers plan ahead, follow social-distancing recommendations and just stay home if you’re feeling sick.

“Park grounds remain open at this time,” the city of Independence said in a release. “Please exercise caution around our available amenities, such as shelters and picnic tables, as we cannot guarantee sanitation between use.”

Independence also recommends park-goers pack hand-sanitizer in addition to bringing their own water.

“We hate closing our playgrounds, but are meeting the County's Health Order by doing so,” the city of Leavenworth said Wednesday on Twitter.

We hate closing our playgrounds, but are meeting the County's Health Order by doing so. Trails and hiking paths are NOT closed, however, visit 10th Avenue Trail for a 1.14 mile or Ray Miller Park for a .5 mile trail while practicing social distancing. pic.twitter.com/R6Sq10PGed

Thursday, the Shawnee Mission School District said it would close all the playgrounds at its buildings, though stadiums and athletic facilities would remain open given visitors follow social distancing and other health safety guidelines.

Finally, Johnson County Parks and Rec announced that it has shut down its playground equipment and outdoor fitness areas at all parks in its system through at least April 23.

All parks and trails remain open for now, but signs are being put up on equipment park-goers are forbidden from using for the next 30 days.

"Prior to making this decision, I communicated with a number of neighboring park and recreation agencies about concerns over the last few days," JCPRD Executive Director Jeff Stewart said in a statement announcing the new measures. "The other three CORE 4 teams (Unified Government of Wyandotte County/Kansas City, Kan.; Jackson County, Mo.; Kansas City, Mo.) have also closed or are in the process of doing so this week.”

Officially, the Antioch Park basketball courts and Meadowbrook Park pickleball courts aren’t closed, but their use is strongly discouraged.