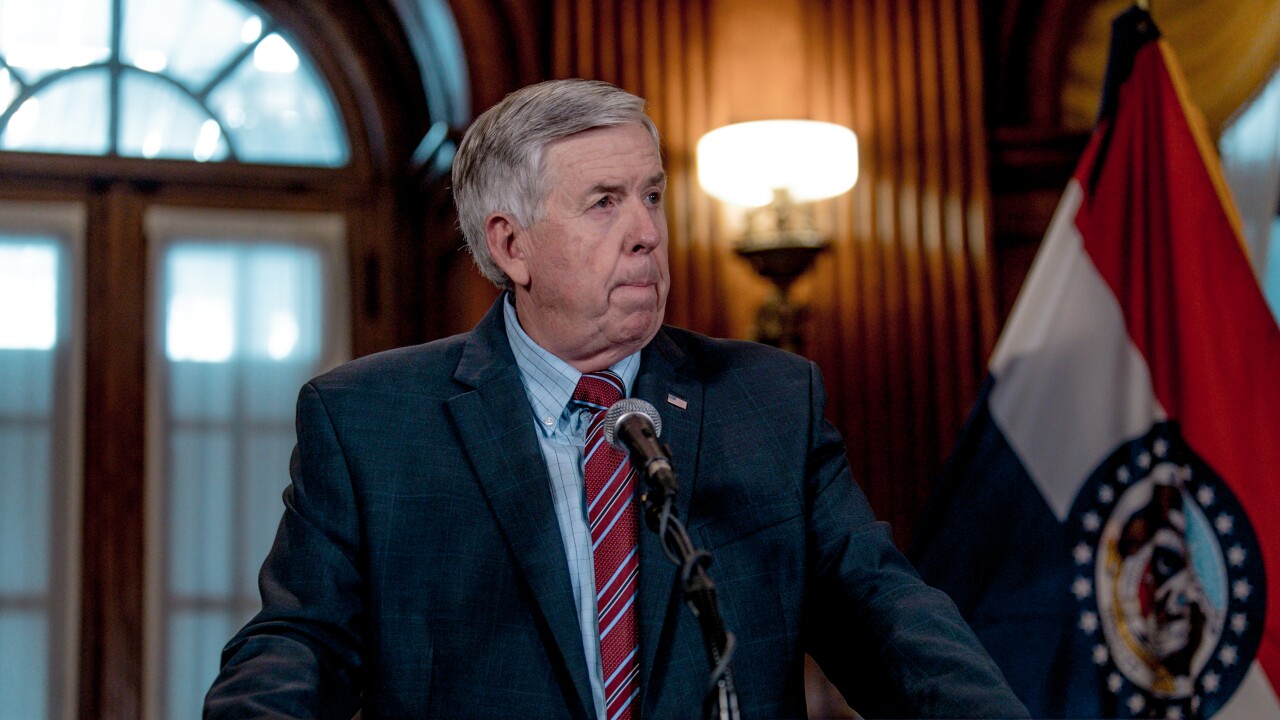 The announcement came a few hours after a spokesperson for the governor confirmed that first lady Teresa Parson had tested positive for the coronavirus.

Parson, 65, has displayed no symptoms and feels healthy, according to a statement from his office, while the first lady has minor symptoms.

"Needless to say, it's been quite a day ...," Parson said in a video posted on social media Wednesday afternoon. " ... First of all, I want everybody to know that myself and the first lady are both fine."

Parson said both he and his wife were tested earlier in the day. He said the "preliminary" results came back positive and that he was taking precautions while waiting for the results to be confirmed.

"Right now, I feel fine. No symptoms of any kind," Parson said. "But right now, we just got to take the quarantine procedures in place."

Teresa and I wanted to share a quick update with you. pic.twitter.com/FrQzMYmA7F

The Parsons currently are in isolation for at least 10 days, according to Missouri Department of Health and Senior Services Director Dr. Randall Williams, who held a brief news conference late Wednesday afternoon.

All of the governor's official and campaign events have been canceled until further notice, and all of his staff have been tested. Williams said that contact tracing has begun, but they believe the Parsons' circle is a "smaller number."

Parson and the first lady made several appearances together this week, including a visit to the new Lake of the Ozarks golf course on Tuesday, where the two posed for photos without wearing masks. In other photos from the tour, they were shown wearing masks.

Over the weekend, the governor attended an event in Springfield, where photos showed him appearing with state Attorney General Eric Schmitt, Secretary of State Jay Ashcroft, Lt. Gov. Mike Kehoe and Treasurer Scott Fitzpatrick. They appeared to be social distancing, but none were wearing masks.

Spokespeople for Fitzpatrick, Schmitt and Kehoe said the officials had all taken tests after Parson tested positive. All of their results were negative.

Parson, a Republican, has been criticized by some for his approach to the COVID-19 pandemic, particularly for the swift reopening of the state in early May and for his reluctance to issue a statewide mask mandate. The governor has preached personal responsibility when it comes to stopping the spread of COVID-19 in the state.

State Auditor Nicole Galloway, Parson's opponent in the November general election, said that she wished the governor and first lady "a safe and full recovery."

“This is a stark reminder that this virus can reach anyone, anywhere and that this pandemic is far from over," Galloway said in a statement. "We must all continue to do our part in preventing the spread of the virus by practicing social distancing, washing hands, and wearing a mask.”

On Wednesday, Williams credited Teresa Parson for asking to be tested after experiencing "very mild" symptoms. He also reiterated that Missouri residents should social distance and use hand sanitizer.

Here is the full statement from the governor's office:

Today, Governor Mike Parson and First Lady Teresa Parson tested positive for COVID-19. Out of an abundance of caution, the First Lady was tested this morning after displaying minor symptoms. The Governor was then tested as well and received a positive result.

All official and campaign events have been canceled until further notice. As a precautionary measure, the Governor's staff has been tested and is awaiting results. At this time, the Governor feels healthy and is displaying no symptoms, and the First Lady has mild symptoms. Proper safety protocols have been implemented at the direction of Dr. Randall Williams, Director of the Department of Health and Senior Services.

During this time, Governor Parson continues to conduct and fulfill all roles of businesses of the state of Missouri from the Governor's Mansion without interruption.