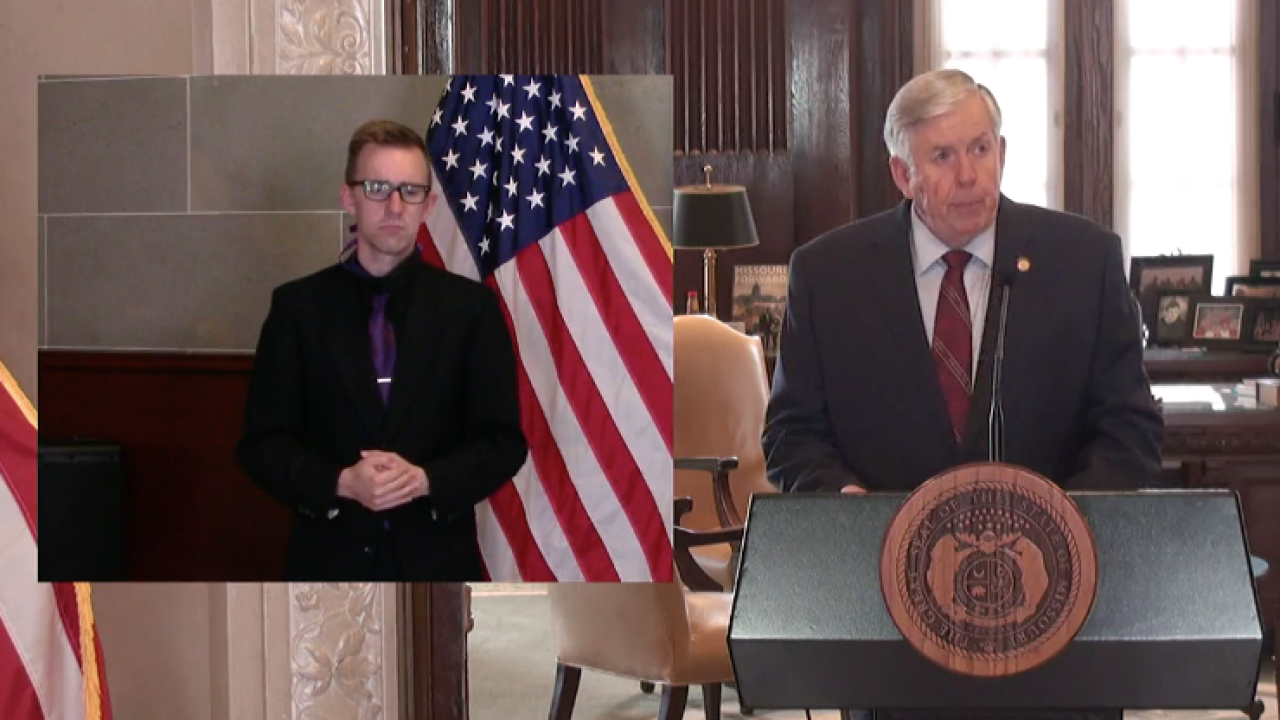 Copyright 2020 Scripps Media, Inc. All rights reserved. This material may not be published, broadcast, rewritten, or redistributed.
Gov. Mike Parson/Facebook
Missouri Gov. Mike Parson gave a briefing on the COVID-19 outbreak in the state Thursday, May 21, in Jefferson City.

KANSAS CITY, Mo. — Missouri is all-in on COVID-19 testing, which Gov. Mike Parson said Thursday will be a critical component as schools reopen in the fall and looking toward the annual flu season.

Department of Health and Senior Services Director Dr. Randall Williams said community, or prevalence, testing has been added to ongoing surveillance and box-in testing strategies as Missouri fights to contain the pandemic.

“We have already been utilizing these strategies and we will ramp them up even further next week,” Parson said.

Community sampling already took place in 13 counties, but there are plans to perform roughly 975 prevalence tests per day in six new counties during the next 10 days. Jackson County is among those six counties.

“Anyone who wants to be tested will have the ability to do so,” Parson said.

The state is also deploying surveillance testing in 28 counties with state-run veterans homes, prisons and behavioral health facilities and plans to conduct 1,440 tests per day at those facilities.

Williams said the only prison outbreaks he’s aware of “that’s he’s concerned with” are in St. Louis County, which requested 600 tests for surveillance testing, and another in Jefferson County.

He said the state plans to use some CARES Act funding to check staff, guards and inmates in prisons and jails for sentinel testing as “an early warning system.”

Earlier this week, Missouri also began testing at all 50 long-term care facilities in the state that have reported a positive COVID-19 test for a staff member or resident within the last two weeks.

The state will perform 9,000 tests at those 50 facilities, where many of the most vulnerable Missourians reside.

Williams said the average age of death for COVID-19 patients in the state is 77 years old, so “we must decrease the number of 77-year-olds getting disease.”

Williams said Missouri’s goal is to perform 7,500 tests per day at the state lab, not including antibody tests.

If someone tests positive, the patient will be isolated and contract tracing will begin.

“In all of our strategies — whether it’s prevalence, sentinel or boxed-in (testing) — that doesn’t change,” Williams said.

He said the state has received $135 million for testing in addition to roughly $500 million Missouri received from the CARES Act.

Most of that money is being distributed to county health departments, which Williams and Parson hope will develop testing strategies to supplement the efforts of the state lab.

“We also want those counties to develop their own capacity, whether it’s antibody testing or box-in strategies,” Williams said.

Kansas City, Missouri, didn’t receive any direct funding from the CARES Act. The state disbursement went to Jackson County instead, because the city, which has its own health department, didn’t quite reach the population threshold of 500,000 for direct federal funding.

That has left Mayor Quinton Lucas in a battle with the Jackson County Legislature over how much money the city should receive.

He asked the county legislature on Monday to cut a check to the city, but legislators were reticent because the county is on the hook to ensure funds are spent within federal guidelines.

Parson said the state has no plans to step in and help mediate the fiscal fight.

“We're not going to get in the middle of turf battles up there,” he said. “That's an issue up there between the county and the cities and in that region, so again I'm not sure that's my place to fight that battle.”

Parson, who said he’s been in regular contact with Lucas, reiterated that the state has functioned primarily in a support role for local health jurisdictions and will continue to operate in that manner.

“I don't think the state's here just to take over the local levels and tell them what to do and what not to do. We're here in a support role, we're going to continue to function in that manner.