Coffee with the Candidates: Alissia Canady 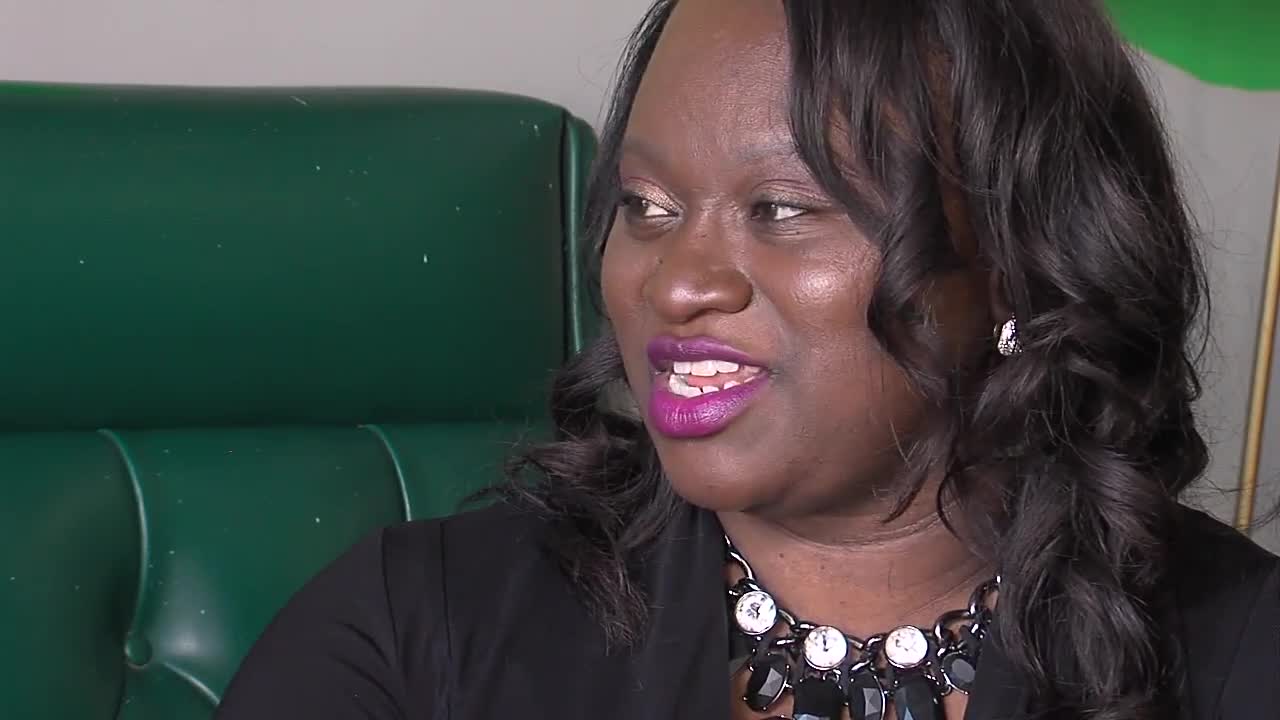 We met Councilwoman Alissia Canady at Ruby Jean's Juicery at 31st and Troost. 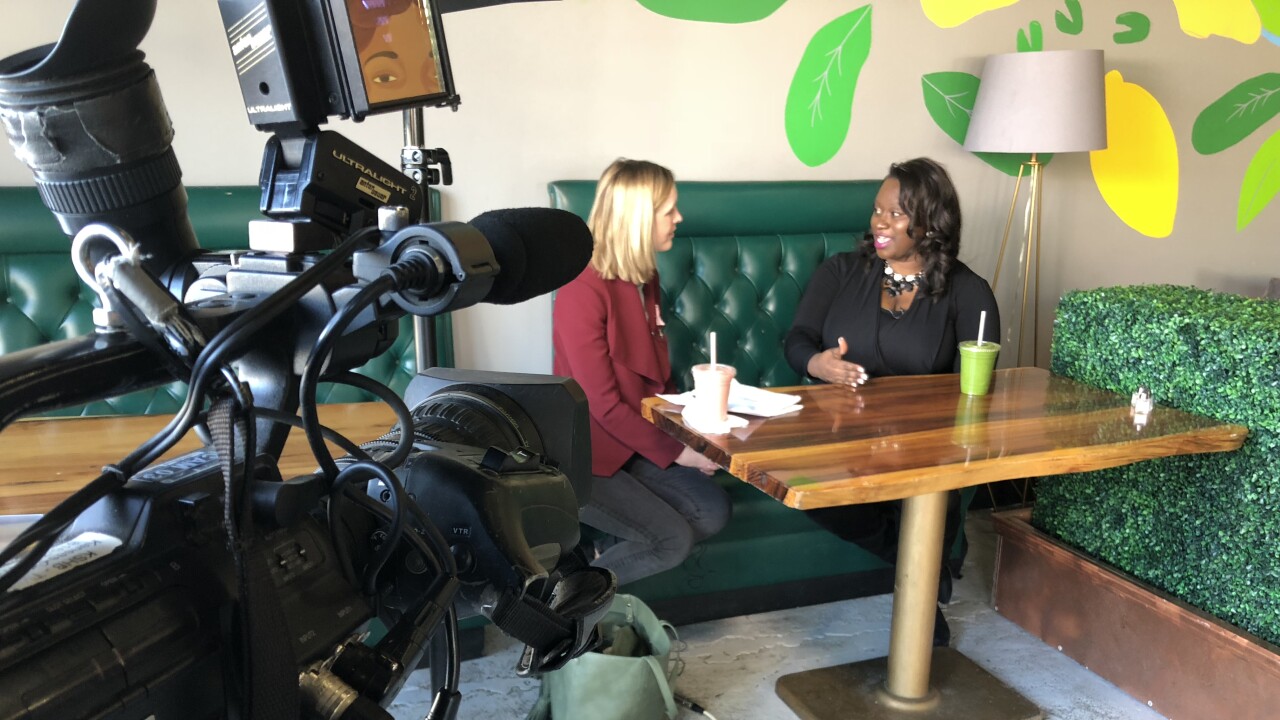 On a quiet Tuesday afternoon, we ordered smoothies and sat down in a green leather booth near the window.

The councilwoman, who was elected in 2015, had just come from hours of budget hearings at City Hall.

"It's a fresh space. It reminds us of opportunity, and so there's good energy in this space," she said of choosing Ruby Jean's for the interview. "It's one of my favorite hangouts."

It was Canady's mother who taught her about opportunity.

"She just worked really hard. There were no excuses," Canady said. "It doesn't matter your circumstances, there are so many opportunities available to you and you need to position yourself to take advantage of them."

Canady heeded the advice. She worked full-time through high school, supporting her family. She then put herself through college and law school.

Now she is running for mayor, and while her mother is proud, she won't be able to go to the polls to support her daughter.

"My mom lives in Grandview, because as a senior, she was looking for affordable senior housing, and she couldn't find it in Kansas City," Canady said.

Speaking of affordable housing- it was a council vote on incentives for a downtown apartment building that pushed Canady into the race.

"After the Three Light vote with Cordish, it just really, really made me realize either I was going to step out and lead on the issues that matter to voters and residents, or I was going to continue being frustrated, looking at my neighborhoods decline and deteriorate," she said.

Here are some of the topics we talked about with Canady:

"I think we need to be very clear on how we’re going to use them, making sure that if we are going to do it, there is a community benefit or impact, where it’s addressing a critical need: housing and jobs that pay a living wage for people in the community," Canady said.

Another idea she raised was payment-in-lieu-of-taxes to school districts and the Jackson County Mental Health Fund.

Canady would prioritize protecting existing housing stock through investment in minor home repairs. She also emphasized the importance of protecting general fund dollars and not using them for luxury development.

"A thousand dollars for a one-bedroom doesn’t help the working mom with three kids who has a kid in Kansas City Public Schools or the Hickman Mills School District, where they’re struggling," she said. "We need to be really clear on what we’re doing and who’s impacted."

The issue of violence turned painfully personal for Canady in October, when her cousin was shot and killed.

It happened at a time when the councilwoman thought her campaign was finally hitting its stride.

"We were kind of right in finding the rhythm in this process, and it took the wind out of me for a little bit," she said.

Canady credits her resilient family with helping her move forward, although they are all still mourning.

The councilwoman also got a firsthand view of crime in the community during her time as an assistant prosecuting attorney in Jackson County.

"My time as a prosecutor, I dealt with people, and each case represented an individual, a family, a victim’s family, and it gave me an up-close and personal experience of dealing with crime in the community," Canady said.

She learned there are three underlying causes of crime: hopelessness, substance abuse and mental health.

That's why one of Canady's first steps in office would be to engage community stakeholders like mental health providers and the courts.

Although the councilwoman said she would keep an eye on patrol staffing, she does not think adding more officers is the solution to crime. Rather, she sees that as a reactive approach that does not reduce calls for service.

"It costs us a million dollars to have 10 new officers. A million bucks. If we took that million dollars and invested into one of the zip codes where they’re responding to the most, I think we’d get a much better reduction in crime by making a million dollar investment in that community," Canady said.

Canady began by describing the process as "disturbing" from the very beginning, citing the infamous River Club meeting regarding the Burns & McDonnell bid for the project.

"We’ve made a lot of promises that we were not able to deliver on, and that’s why I ultimately voted no," Canady said of her vote against the development agreement with Edgemoor.

Canady expressed concerns that some of the original items in the community benefits agreement were struck from the final document. The FAA said airport revenue could not be used to pay for those items, which included a mental health fund and a donation to Love Thy Neighbor. Edgemoor committed to paying for the benefits despite them not being in the contract.

"We’ve had good conversations and they’re saying well, 'Just trust me.' I’m not saying I don’t trust them, I've just gone through this same situation with Cordish where they made a commitment they were going to build affordable housing and they’ve yet to do it," Canady said.

"We’re going to have some amendments to these agreements. That’s just how these sorts of projects go, and I will be committed to making sure we can memorialize a lot of these verbal agreements, these gentleman’s handshakes that have happened behind closed doors," she said.

Canady said she supports completion of both streetcar extensions, but hopes the transit conversation will shift toward getting people to jobs.

"What’s more important in Kansas City is how do we deal with regional transit, getting people to work from their doorstep," she said.

Canady said she has already had conversations with mayors across the region.

"The key is making sure Kansas City is leading on issues, and we’re being good stewards of taxpayer dollars and making sure it’s a safe city for our residents and affordable housing exists here. I think those have to be at the forefront of what we’re doing, and if we do those things well, people will continue to look to us and respect us," Canady said.

Canady maintains the sales tax should only be used for housing, transportation and infrastructure.

"I would support Pre K using a mill levy increase led by the school districts," she said.

Standing Out in a Crowded Field

Canady started by pointing she is the only woman of color in the race, which naturally makes her stand out.

"I’m the only candidate that’s running for mayor that has been a consistent watchdog of taxpayer dollars when it has come to these corporate giveaways and incentives. I am the only council person and the only person that’s running that has been committed and steadfast in transparency," she said, "I’ve demonstrated my ability to stand up against special interests, stand up to political pressure and stand up to cronyism essentially and say we’re going to do what’s right because it’s the right thing to do. And I think the voters respect that."

Canady said as mayor she would build upon the best practices employed by Mayor James, but she would want to leave a different legacy.

More information about Canady is available on her campaign website.