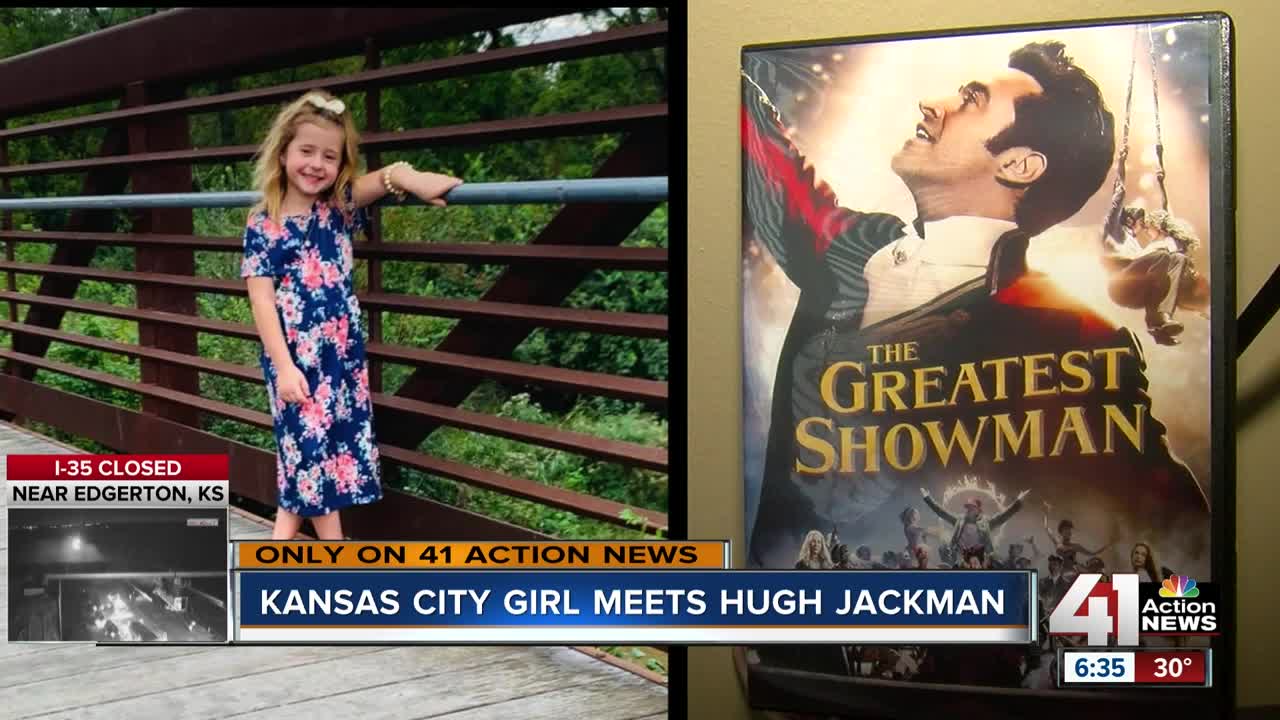 Earlier this month, international superstar Hugh Jackman was in Kansas City for a performance at Sprint Center. One of the best moments happened when a little girl in the audience walked up and tapped Jackman when he left the stage and walked into the audience. 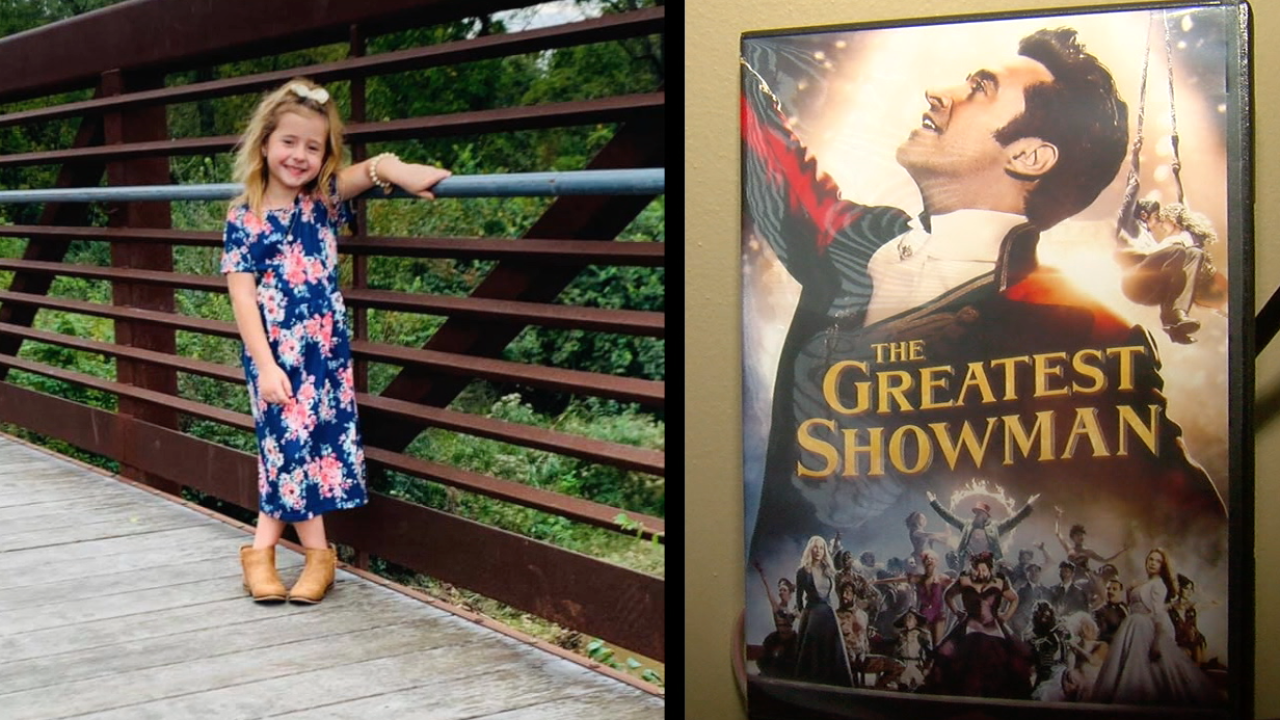 KANSAS CITY, Mo. — Earlier this month, international superstar Hugh Jackman was in Kansas City for a performance at Sprint Center. One of the best moments happened when a little girl in the audience walked up and tapped Jackman when he left the stage and walked into the audience.

Jackman asked the girl, 5-year-old Chloe Campbell, if she was having a good time, and what kind of music she liked.

“I want to sit down and watch you," Chloe said.

With that little bit of honesty, the audience fell in love, and so did Jackman. He brought Chloe back over to her family. After a quick introduction, he invited Chloe's father Dave up on stage to dance with him.

“I just did it because I didn't want to let my girls down," Campbell said.

"I was embarrassed, because like, I don't see him do that a lot,” Lily Campbell, Dave’s oldest daughter, said. “But, when he went up there, I was like, 'Uh oh.'"

Dave performed one of his well-practiced dance moves, twisting his hips, then spinning on the ground.

“That combo was actually pretty rushed, because I was a bit nervous,” Campbell said. "But that's my wedding move, I do that at every wedding.”

But after the dance, Dave revealed to Jackman and the audience the reason the family was there.

"My daughter did just have brain surgery," Campbell said into the microphone.

Just this year, Chloe was diagnosed with hypothalamic hamartoma.

"They consider it a tumor, but it's really not,” Jessica Campbell, Chloe’s mother, said. “It's really brain mass that has grown in a spot where it shouldn't be."

From the age of just a few months old, Chloe would laugh at strange times.

“I remember my mother-in-law saying at like four months old she shouldn't be able to laugh yet,” Jessica said. “As she got older, and more aware, she would have like a petrified look on her face when she had them, because it's kind of like, ‘My body's doing this, and I can't control it.’”

The Campbell family learned those laughing fits were actually seizures, and they got worse.

“She would just stare off into space, and not know what's going on afterwards, or what she was doing,” Jessica said.

After months of testing in Kansas City, the Campbell family found a surgeon at Texas Children’s Hospital in Houston. Chloe and her parents spent three weeks there for further tests and a surgery, in which the surgeon used a laser to burn the brain mass away.

“I remember my mom and dad were there," Chloe said. “They fixed my brain."

During that long trip to Houston, Chloe and her parents spent hours just sitting in a hospital room, unable to leave. It was during that time that Chloe’s love for Hugh Jackman grew through his film “The Greatest Showman.”

“We would have 96-hour stays at the hospital, and we would burn that CD in, and we would watch it 4-5 times a day, because we were stuck in a room,” Dave Campbell said. “And she'd be like, ‘Hey, let's watch The Greatest Showman,’ and she would sing to the nurses and doctors when they came in.”

At her worst, Chloe was having 10-15 surgeries a day. Since her surgery in August, she's been seizure-free.

The trip to see Jackman perform worked out incredibly for the Campbell family. Dave tried to purchase tickets on his computer the day of the show, but his credit card wouldn’t work. So, only hours before the show, he walked up to the box office at Sprint Center, and bought three floor seats. The ticket clerk sold him a much less expensive ticket in the upper sections for the fourth ticket, and allowed him to let Chloe sit in his lap.

During the show, Jackman was only too glad to celebrate Chloe’s successful surgery.

"Thank you so much for coming,” he told Chloe. “And you make sure you give your mommy and daddy the biggest hug tonight, because they're the best mommy and daddy in the world. And everyone here in Kansas City, Missouri, thinks you're the most amazing little girl, Chloe."

Chloe’s parents said since the surgery, she's like a completely different child.

“The first time she laughed after the surgery, we all looked at each other, and we were like, ‘Oh, that's her real laugh now,’” Jessica said. “So now, to hear her laugh, it's amazing. And we don't have that fear that it's a seizure coming on.”

The Campbell family said they owe a great deal to the Epilepsy Foundation of Kansas and Missouri, for the support they’ve provided since Chloe’s diagnosis in January 2019. You can learn more about that foundation by clicking here.

You can also learn more about Chloe and her family by visiting the Facebook page they created to document her journey.

Another member of the audience recorded the entire interaction between Hugh Jackman and the Campbell family. Click here to watch the video.