At the start of this year's Holden Street Fair, a particular booth raised some eyebrows.

HOLDEN, Mo. — At the start of this year's Holden Street Fair, a particular booth raised some eyebrows.

Valerie Reilly and her husband Stephen with the Cass County Republicans created a game for children involving a toy gun.

"The whole purpose was that they would hit this and then Uncle Sam would discuss with them what the issues were," Valerie Reilly said.

But if they missed, one of the targets in the so-called "shooting gallery" was Democratic Sen. Claire McCaskill. 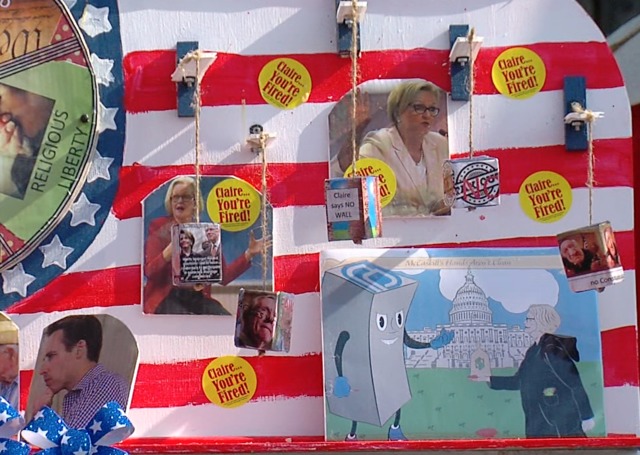 "It had nothing to do with shooting a politician, that is ridiculous," Valerie Reilly said.

Across the street, Raymond James with the Johnson County Missouri Democrats doesn't see it that way.

"I don't think we should be joking about shooting politicians, joking about people getting shot—unacceptable!" James said.

Those bothered by the initial game said it brought back memories of the assassination attempt of former Congresswoman Gabby Giffords in 2011 and the shooting last year during a practice ahead of the Congressional baseball game.

"We have disagreement about issues, sure--we can talk about issues--but we're not talking about targets on people," James said.

Eventually Josh Hawley's campaign got wind of this display.

"This morning they let us know let's take the guns away even though it's a toy," Valerie Reilly said.

And they changed the name of the game, which quelled some of those concerns.

However by dinnertime Friday, fair organizers shut down both booth of the republicans and democrats because of the negative publicity they brought to the Missouri town of 2,200 residents.