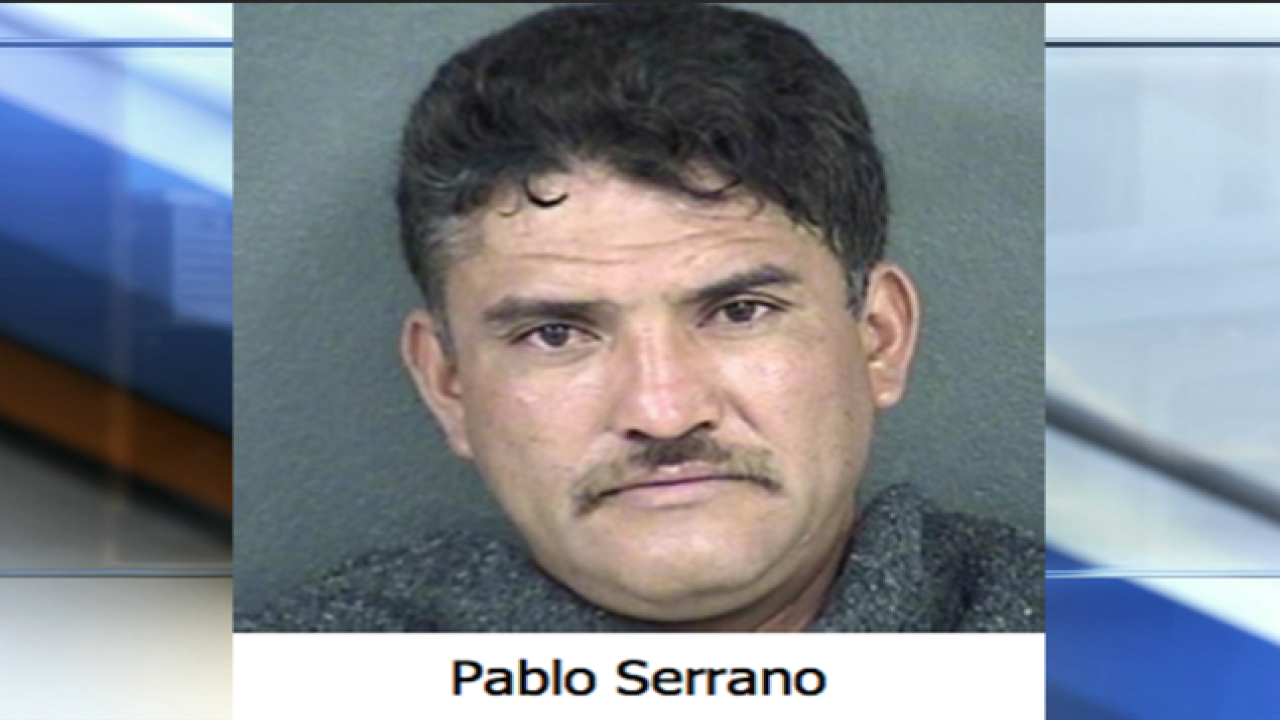 A few hours may have made the difference between freedom in the United States and deportation for the man accused of killing four people at his neighbor's home in Kansas City, Kansas on Monday before killing another man about 170 miles away in a rural Missouri house on Tuesday.

41 Action News has learned that when Pablo Serrano-Vitorino was arrested on domestic violence charges in June 2015, the Wyandotte County Sheriff's Office sent U.S. Customs and Enforcement (ICE) what's called an immigration alien query (IAQ). Serrano-Vitorino, 46, is a Mexican national who authorities say is in the country illegally,

IAQs go to the ICE Law Enforcement Support Center in Vermont. According to its website, the center "operates 24 hours a day, 7 days a week, 365 days a year." The center's officers and specialists "place immigration detainers on aliens suspected of residing in the country unlawfully."

Court records show that after holding Serrano-Vitorino for six hours on the domestic violence charges, Wyandotte County--receiving no response from ICE--released Serrano-Vitorino. Under the law, ICE has fours hours to respond to an IAQ.

It is unclear whether Wyandotte Co. would have been able to hold the suspect on a "detainer" (immigration hold) even with a response from ICE.

“U.S. Immigration and Customs Enforcement (ICE) previously removed Pablo Serrano-Vitorino from the U.S. in April 2004, based on a final order of removal issued by a federal immigration judge.  Serrano-Vitorino illegally re-entered the United States on an unknown date.  ICE placed a detainer on Serrano-Vitorino March 9, 2016, following his arrest on multiple murder charges.  ICE will continue to work with local entities and take steps to once again remove him from the country once the criminal case is completed.

On Sept. 14, 2015, ICE received an electronic notification that Serrano-Vitorino was fingerprinted at the Overland Park Municipal Court after receiving a fine for driving without a license. Although the notification prompted ICE to issue a detainer to the Johnson County Sheriff’s Office, Serrano-Vitorino was at court for a municipal fine and was never remanded to the sheriff’s office custody. Therefore, neither ICE nor the Johnson County Sheriff’s Office could take action on that detainer.”

Early Wednesday evening, ICE sent an updated statement. It indicates Serrano-Vitorino was convicted of a DUI in Coffee County, Kansas in 2014, but was never notified.

Coffee County Undersheriff Tom Johnson confirms Serrano-Vitorino was arrested by the Kansas Highway Patrol on Nov. 1, 2014 and booked into the Coffee County Jail.

Johnson, however, didn’t have access to further court records and couldn’t way if ICE had been notified about Serrano-Vitorino or not.

As for the two more recent issues in the metro area, ICE says because Serrano-Vitorino was only issued a traffic ticket in Overland Park and not arrested, he could not have been federally detained.

A spokesman for the Overland Park Police Department says Serrano-Vitorino wasn’t arrested for failing to have a valid driver’s license because he was living in Kansas.

He says had Serrano-Vitorino been from Missouri or any other state, he would’ve been arrested and held on bond.

Serrano-Vitorino ultimately pleaded guilty to driving without a valid license and paid a $146 fine. There was no explanation about why ICE didn’t respond to Wyandotte County in June. Had he been federally detained, he could’ve faced up to 20 years in prison for re-entering the country illegally after being deported.

Serrano-Vitorino was originally deported in 2004 after he was convicted of terroristic threatening, a felony, in Los Angeles.

Federal officials helping with the investigation

The Bureau of Alcohol, Tobacco and Firearms is now helping with the investigation.

Officials are trying to trace the weapon and learn how Serrano-Vitorino got his hands on a trigger used to kill five people.

Based on his immigration status, he was not allowed to legally posses a firearm.

“We have started the tracing procedures on that gun to determine where that gun came from and ultimately how that individual obtained the weapon,” said John Ham, public information officer for the ATF Kansas City field division.

Ham told 41 Action News the Missouri Highway Patrol contacted the bureau for help after Serrano was captured and arrested. A semi-automatic AK-47-style rifle was with him, at the time of his arrest, but no shots were fired.

To trace the weapon, “We have to start with the manufacturer or importer of the gun and then it’s literally phone calls to the wholesale or dealer of the gun in a legal transaction. Oftentimes guns are pretty mobile,” said Ham.

Tracing the weapon could take days or weeks.

“If somebody provided this gun to him knowing that he could not have it, knowing he could not buy one, that person could certainly face federal charges,” said Ham.

Watch 41 Action News Reporter Ariel Rothfield's story about the victims in the homicides below: