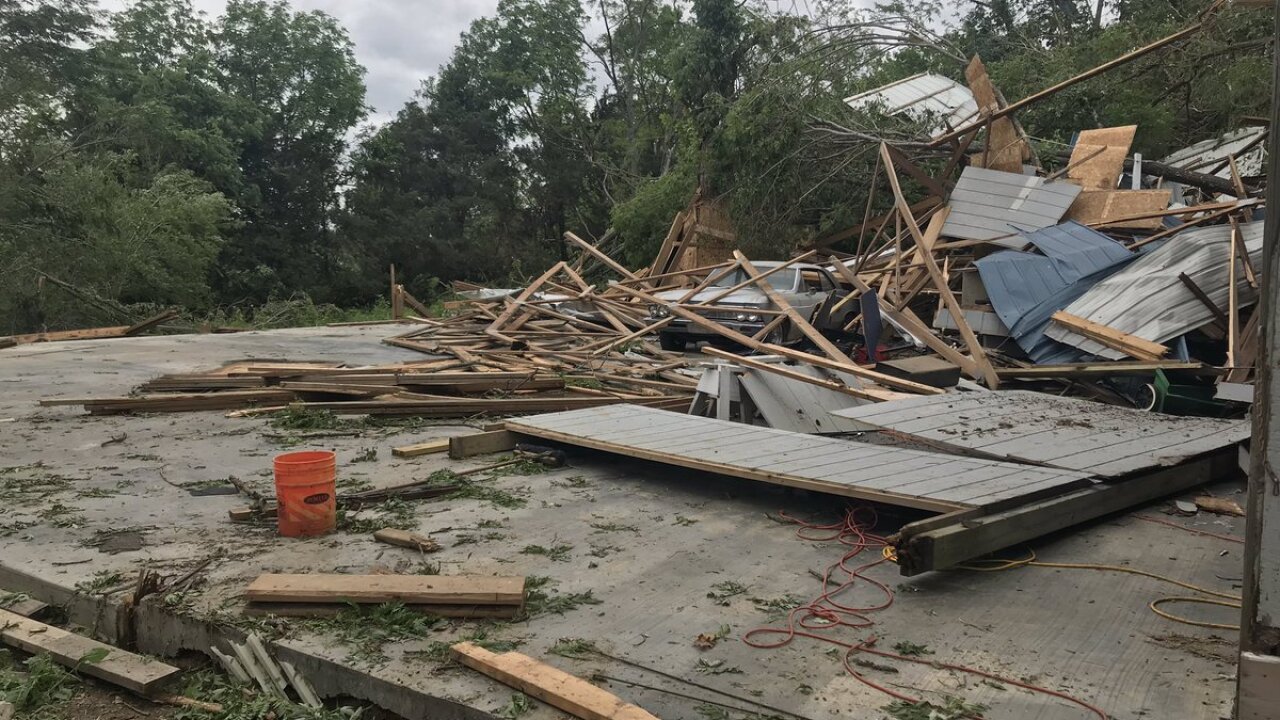 Douglas County officials said Wednesday that they continue to assess the damage caused by a violent storm that ripped through an area south of Lawrence on Tuesday night.

LAWRENCE, Kan. — Douglas County officials said Wednesday that they continue to assess the damage caused by a violent storm that ripped through an area near Lawrence on Tuesday night.

On U.S. 59, some homes continued to be on "lockdown mode" Wednesday as crews worked to shut off downed power lines. At a news conference, Douglas County Sheriff Ken McGovern said that those lockdowns could last for another day, he said.

"I came down and laid down here under the support beam and put a cover up over it, tried to help the glass," Lawrence resident Billy Brumley said. "As soon as I laid down and put the cover over it, I could see out that window. I could see debris flying by."

He was shocked about what happened next.

"I laid here and I heard the roof go off," Brumley said. "I heard a lot of noises. It was very loud, and I was hopeful the house wouldn't come down on me."

Brumley, who has lived in the same neighborhood with his wife for 35 years, is grateful for the countless people helping him.

"I think there are a lot of nice people, and my nephews are all here," he said. "I have friends here. My son is here. There is a lot of help. You can rebuild."

Still, the damage was an incredible sight to behold with more than 30 trees snapped in half on one property alone along U.S. 59 in south Lawrence.

"I have never seen this much damage before," said Ashlynn Heck, who was picking up tree limbs with her cousin. "It's just so crazy."

Look at 30+ trees that were ripped apart right off of Highway 59 in Lawrence. This is on the other side of the highway of where I was last night. pic.twitter.com/cu5PknZIWr

Most of the roads in Douglas County were clear of debris, though some streets were still barricaded to allow Westar Energy crews to remove power lines from the sides of roads.

Wakarusa Township Fire Chief Mike Baxter said that crews had searched 200 homes, with no serious injuries reported. On Wednesday, they were focusing their efforts on the path where the suspected tornado hit. The National Weather Service has not yet categorized the storm.

Initial reports indicated about 160 homes were damaged in the storm. Approximately 46 of those homes sustained heavy damage, and another 20 to 25 homes had moderate damage, Baxter said.

Crews were planning to continue primary search efforts until 7 p.m. Wednesday to make sure the affected areas were clear, Baxter said.

McGovern said that he believes residents paid attention to the warnings, which helped to limit the number of injuries. The sheriff said 17 people were wounded in the storm, with three people hospitalized due to their injuries.

“They heard the sirens; they knew the weather was coming,” McGovern said. “A lot of it is, they paid attention, they got in the basement and got in that shelter.”

Officials also urged people hoping to help to wait until first responders had finished their efforts.

“We’re still assessing the situation, so the volunteers can just bide their time, and when we need them, we’ll reach out,” McGovern said.