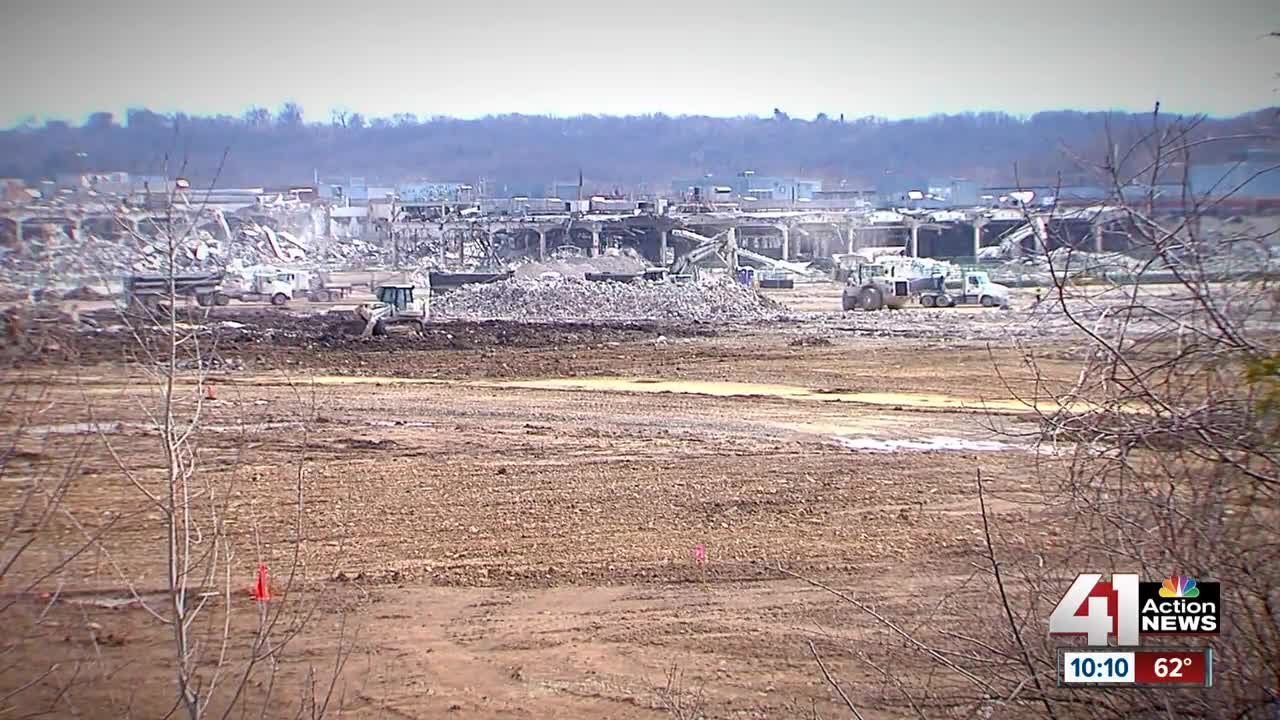 After years of sitting abandoned and being at the center of lawsuits and medical compensation claims, the Bannister Federal Complex is being transformed. 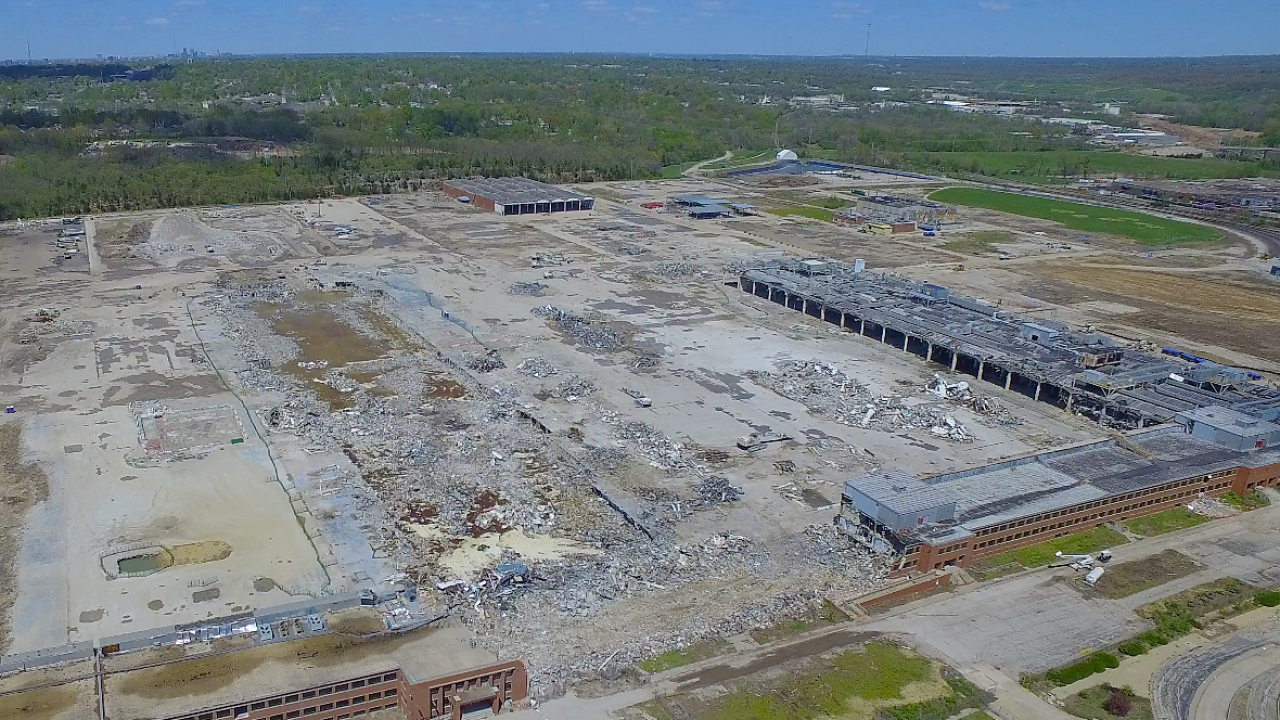 KANSAS CITY, Mo. — After years of sitting abandoned and being at the center of lawsuits and medical compensation claims, the Bannister Federal Complex is being transformed into an area that will be home to 2.5 million square feet of warehouse space and around 1,500 new jobs as part of a federal project costing more than $200 million.

On the day of a recent exclusive tour granted to 41 Action News, around 100 workers were busily moving about the large property; some were operating equipment or demolishing old buildings, while others continued work on the cleared land to make way for new development.

In one section of the property, a team of workers in white body suits were in an area fenced off by green barriers in an effort to find and haul away toxic soil.

The future for the site comes after years of planning, both for development and for how to address environmental concerns.

While some have lauded the work for bringing economic activity to a dormant site, others have complained that evidence could be lost for unresolved medical lawsuits.

As the Bannister Federal Complex undergoes a massive overhaul, 41 Action News dove deeper into the story of the past, present, and future of the area.

The complex, which sits near Bannister Road and E. 95th Terrace, hasn't always been a seemingly endless stretch of buildings.

Nearly 100 years ago, the site was home to the Kansas City Speedway.

Decades later, the site would eventually be home to the Bannister Federal Complex.

During its time, the facility hosted workers with the Department of Energy. A site partly owned by the General Services Administration near Troost Avenue and Bannister Road was home for Honeywell Federal Manufacturing and Technologies, where employees made nuclear missle parts.

The complex, which sprawled across over 200 acres, would later be at the center of of health hazard claims and lawsuits.

During multiple investigative reports from 41 Action News, hundreds of former employees at the site reported severe diseases and rare forms of cancer that likely came from their time on the job.

Other reports have shown that the workers were exposed to more than 2,400 toxins at the site.

While millions of dollars have been awarded to sick employees, other cases remain undecided.

Much of the demolition, groundwork, and physical cleanup for the current $200 million project started in 2018.

On any given day, groups of construction workers are at the site operating equipment to brings years of planning and visions to fruition.

Kevin Breslin, who serves as a principal owner for Bannister Transformation & Development LLC, has helped oversee the effort and coordinate the teams.

Inside a trailer on the outskirts of the site, he showed 41 Action News the meeting room where decisions are made and plans are reviewed and analyzed by staff.

Maps hang on the wall and are laid out along a long table inside, with notes and other memos dotting other spots.

“There’s a lot of collaboration and a lot of communication,” he said. “That’s how you take a complex project like this with so many moving parts.”

One diagram shows outlines of old Bannister buildings and red squares near parts of the eastern side of the property.

While seemingly easy to overlook for an outsider, the red markers designate areas that contain contaminated soil, which Breslin said only account for 5 percent of the total land on the property.

“We know where those soils are located. Literally you dig them up, dispose of them according to all the legal requirements and now you’ve removed the surface hazard,” he said. “These were relatively small spills that occurred and they occurred only on a couple of special specific instances where a pipe would break or a machine would break.”

Despite the contaminated areas only filling a small portion of the site, the work to safely remove the toxins requires close attention to detail for anyone on the project.

“We have to be in the field watching the excavation and seeing that it’s done to the proper parameters,” environmental consultant Harvey Cohen said. “This material is stuff you don’t want to ingest, you don’t want to breathe it in. You don’t necessarily want to get it on your skin.”

“When you’re taking samples, you wear the appropriate gloves,” Cohen said. “If you’re working in an excavation area like the soil contamination, you wear disposable Tyvek suits.”

While some of the workers wear individual monitors to keep an eye on environmental conditions during the work with contaminated soil, other technology can be found all around the site analyzing air and water quality.

The air monitors, which stretch several feet off the ground, can be found in half a dozen areas of the property and play a crucial role in keeping things safe.

One of the monitors shown to 41 Action News was a water basin filled with clusters of rocks and netting. It records the quality of storm runoff and other water at the site.

Breslin said the basins around the property can process around 500 gallons of water a minute.

“Since we started the operation here, I think we’ve pumped somewhere around 120 million gallons of water,” he said. “It goes through a very specific carbon filtration system.”

As workers operate around the property, teams with the Missouri Department of Natural Resources keep an extra set of eyes on the project to make sure all rules and regulations are being followed.

“On these kinds of projects, it’s important to keep everybody safe,” Missouri Department of Natural Resources manager Ben Moore said

Moore says no injuries have been reported since the project started last year.

“That’s what safety is all about," he said. "You want your people to go home to their families at night.”

The effort to properly remove toxic materials even involves a rail system reconstructed at the site.

Multiple train cars, each with a special lining to handle contaminated soil, are brought in throughout the week to haul away hazardous material.

According to Breslin, the rail system served as the safest and most efficient way to get rid of the toxins at the site.

“We’re not impacting roads with a lot of hazardous waste trucks and truck traffic,” he said. “It’s that much more schedule efficient, so it allows us to get through this soil excavation part of our work in a much shorter period of time.”

Breslin told 41 Action News that the contaminated soil is transported hundreds of miles away to a special landfill in Roachdale, Indiana.

Due to the hazards with the soil, Breslin described the special measures taken to make sure the material stays sealed after it is dug up at the site.

“We have crews that put a thick plastic wrap on the inside (of the train car) so that the contaminated soil goes in,” he said. “It’s completely sealed on top. It’s a hard cover in order to keep the load inside. There’s no way it can get out. It’s obviously protected from the elements too. Once they take it from here, they’ve got professional hazardous waste haulers that are certified.”

Measures are even taken to make sure dirt does not fly off the property on windy days.

During the exclusive tour, multiple trucks could be seen making laps and spraying water over the ground around the site.

“Dust suppression is a critical part of our site control,” he said. “We are constantly spreading water across the site to dampen it.”

With all the measures in place to monitor possible hazardous conditions, Breslin said a true safety culture was in place for the project.

The exclusive tour granted to 41 Action News soon moved to a hill overlooking the property.

While some parts of the land are now stripped bare, others continue to be home to demolished buildings and piles of rubble.

Work on the property will continue for years ahead, with plenty of extra soil being brought in as a layer over the current ground.

“We’re going to bring about 1.3 million cubic yards of new clean soil to fill into the site,” he said. “We’re raising the grade of the site roughly six to eight feet depending on where you are. That’s a lot of dirt.”

In the years ahead, the site will be home to 2.5 million square feet of industrial and distribution warehouses.

According to Breslin, around 1,500 jobs will come as a result of the development.

While an official marketing effort to find businesses for the warehousing is still months away, Breslin was excited at the possibilities the property will provide.

“We came up with a comprehensive plan to repurpose this site and that’s what you’re seeing here,” he said. “Two or three years from now, people aren’t going to recognize this place.”

Some of the non-hazardous concrete structure material will be recycled and reused.

Officials at MoDNR also said that the site will continue to be monitored in the years ahead for possible environment concerns.

With the site still taking shape, Breslin said the land once home to the Bannister Federal Complex now had much more hope.

“We could’ve gone the other way,” he said. “Everybody stepped up and decided to do it the better way, which is to create some new opportunity and new value down here for south Kansas City.”