Gas Tax explained: Why lawmakers say this one is different than the rest

This November, voters in Missouri will decide whether to increase the state gas tax. Missouri has one of the lowest gas taxes in the Midwest, and it hasn't increased since the early 1990s.

KANSAS CITY, Mo. -- This November, voters in Missouri will decide whether to increase the state gas tax.

Missouri has one of the lowest gas taxes in the Midwest.

It hasn't been increased since the early 1990's.

Lawmakers are quick to point out that Missouri has the 7th largest systems of roads and bridges in the nation and yet ranks 47th when it comes to transportation funding. 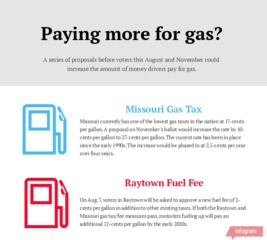 "We have major projects that need to be worked on here in Kansas City," said State Rep. Greg Razer (D - 25th District)

Many Republicans support the tax, too.

"We got to do something about the highways, the bridges, our airports, our rail," said Governor Parson.

It would be phased in over four years.

Lawmakers say this gas tax will be different.

If it passes, most of the new money, up to $288 million, will go to the Highway Patrol, which is normally funded by through the Missouri Department of Transportation.

If that happens, MoDOT could then spend the money that normally goes to Highway Patrol on infrastructure projects.

There would even be money left over, $123 million dollars, for cities and counties to use for road projects.

Even though the gas tax increase will be used differently, drivers still show a reluctance to vote for it.

"I'm going to vote no," said Don Plaskett, a small business owner that uses several large vehicles for his job. "We waste a lot of money, the government wastes money."

Long before the state gas tax is voted on, the people of Raytown will vote on Aug. 7 on a new Fuel Fee for anyone who gasses up in Raytown.

If it passes, a 2-cent per gallon fee will be put in place.

"We're pretty much working in 1978 checkbook, and this will be an opportunity to bring it up to 2018," said Damon Hodges, the Director of Public Works for Raytown. "That 2 cents will get us around $250,000 annually. Our citizens understand this is a necessity."

If the proposed fuel fee in Raytown and the state gas tax increase get the thumbs up by voters, drivers filling up in Raytown will pay both.