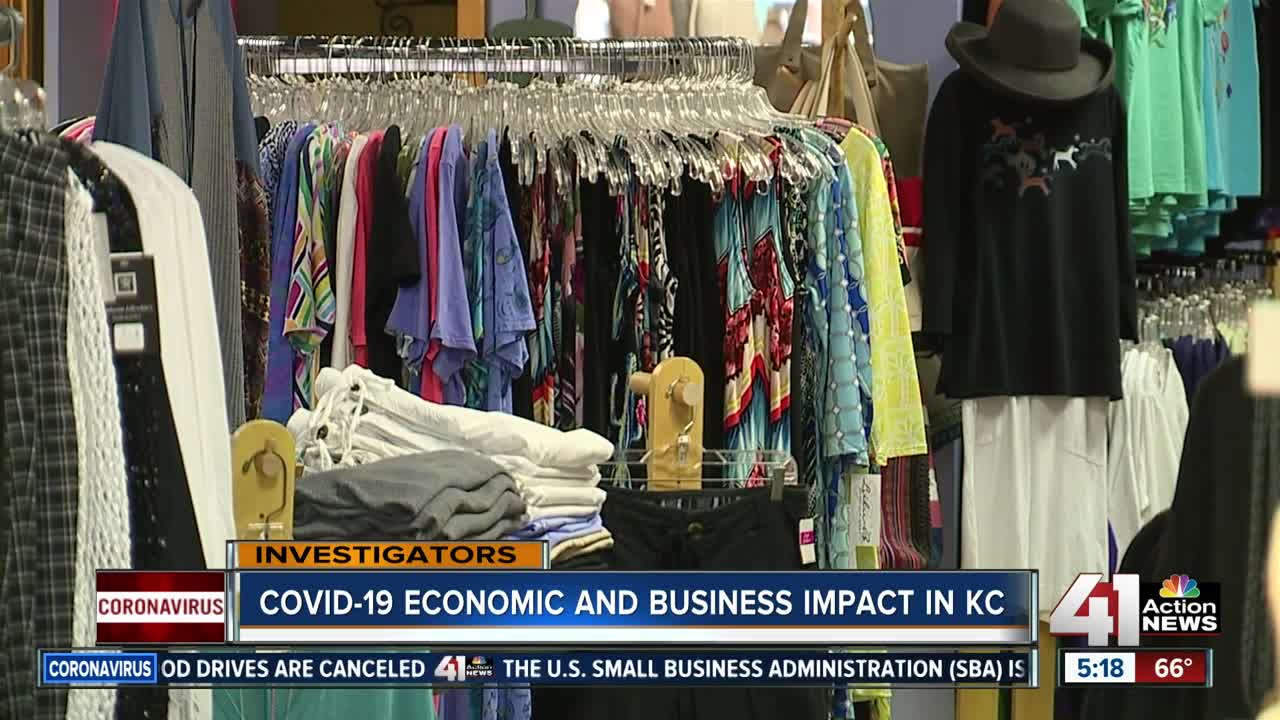 One local business shares how it is adjusting to life during the coronavirus pandemic.

KANSAS CITY, Kan. — Metro businesses, both big and small, are feeling the impact of COVID-19. Those struggles could impact government tax revenues as well.

There were no customers at the Mission Fresh Fashion store on Johnson Drive Tuesday, a business run by Becky Hanf and her husband for 22 years.

"We've had a lot of people that we know by name. Had a couple come by this morning looking in the window waving at us so I mean it's difficult," Becky said.

With no online presence for the business, Becky said she'll now resort to using Facebook to let her loyal customers know when new items arrive in the store and ship the purchase to the buyer.

"I just wish everyone stays healthy, stays well. Support your small business if you can," Becky said.

By contrast, major KCK Legends area retailer Nebraska Furniture Mart does have an online business and it's growing.

Boldt said the company has also recently seen a surge in refrigerator, freezer and even home gym equipment sales due to people staying at home to avoid the virus.

Even though the store has been deemed an essential business, company leaders have decided on their own to shut down their showrooms in their four stores across the country as of Friday and go exclusively with online sales.

The only other time a showroom has been shut down in the company's more than 80 year history was in 1975 after a tornado in Omaha.

"We have no idea how long this is going to last. This is an ever-changing thing that is really one of the first in modern history," Boldt said.

State and Unified Government annual records show Nebraska Furniture Mart is critically important to financing the entire development of the Legends and Village West area in the western part of KCK.

According to the most recent figures, Nebraska Furniture Mart accounted for $36 million in annual sales taxes to help pay back the Unified Government's sales tax revenue or STAR bonds used to develop the area.

That figure represents more than 75-percent of sales tax revenues generated in the STAR Bond area.

"We consider ourselves an important part of the community and we want to be able to serve the community. I'm sure that they do count on our sales revenue to help pay taxes in the community." Boldt said.

For Becky and her husband, their small store is their entire livelihood.

"When we shut down, it just kind of gets scary for our household how we're going to make it through this, but we will. I hope that we get a little activity. If we didn't have anything for 30 days, we'd be fine and the business would come out the other side. But mentally, it would be nice to get a few sales," she said.

By contrast, Nebraska Furniture Mart, with stores in KCK, the Dallas area, Omaha and Des Moines, has about 5000 employees.

Boldt said since the store opened in 1937, despite a World War, a depression and recessions, Nebraska Furniture Mart has yet to lay off employees. He said all employees are working now on a voluntary basis and can leave and use paid time off without repercussion and all employees with be paid in full for at least the next 30 days.

Boldt said the warehouse people who continue to work during the showroom shutdown are getting paid time and a half.

In KCK, the company has a contract with a delivery company to bring appliances where they're currently being dropped off at customer driveways.

He said that delivery company and their employees are also relying on Nebraska Furniture Mart to stay open and active. Boldt said a positive sign are agents in the call center, who are taking orders at their own homes, received a combined 50,000 calls last week, double a typical call volume number. But the company is also preparing for potentially long and tough times ahead.

"We have always thought this could be a much longer issue, not only from a health perspective, but also from an economy perspective. And it could certainly damage the economy. I hope that's not the case, but certainly we're preparing for that. We've survived every time and our intent is certainly to survive this time," Boldt said.