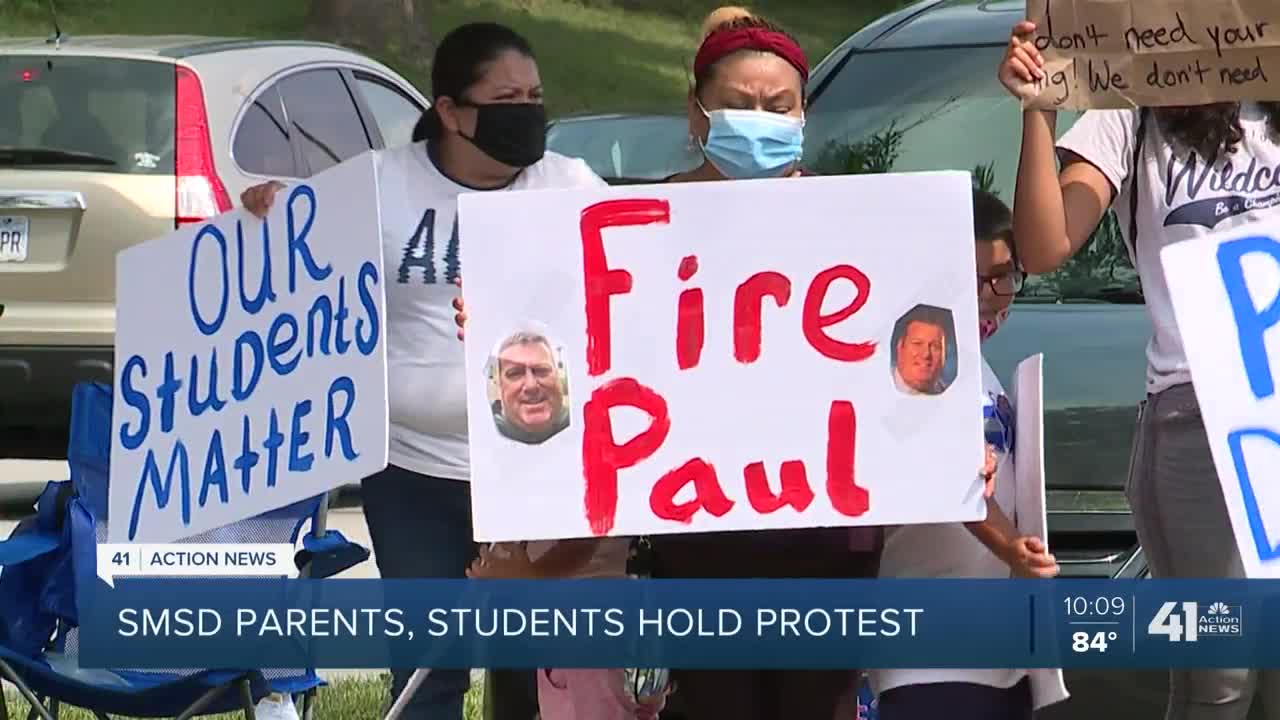 The Shawnee Mission School District Board of Education has authorized up to $45,000 to continue investigating one of its principals. 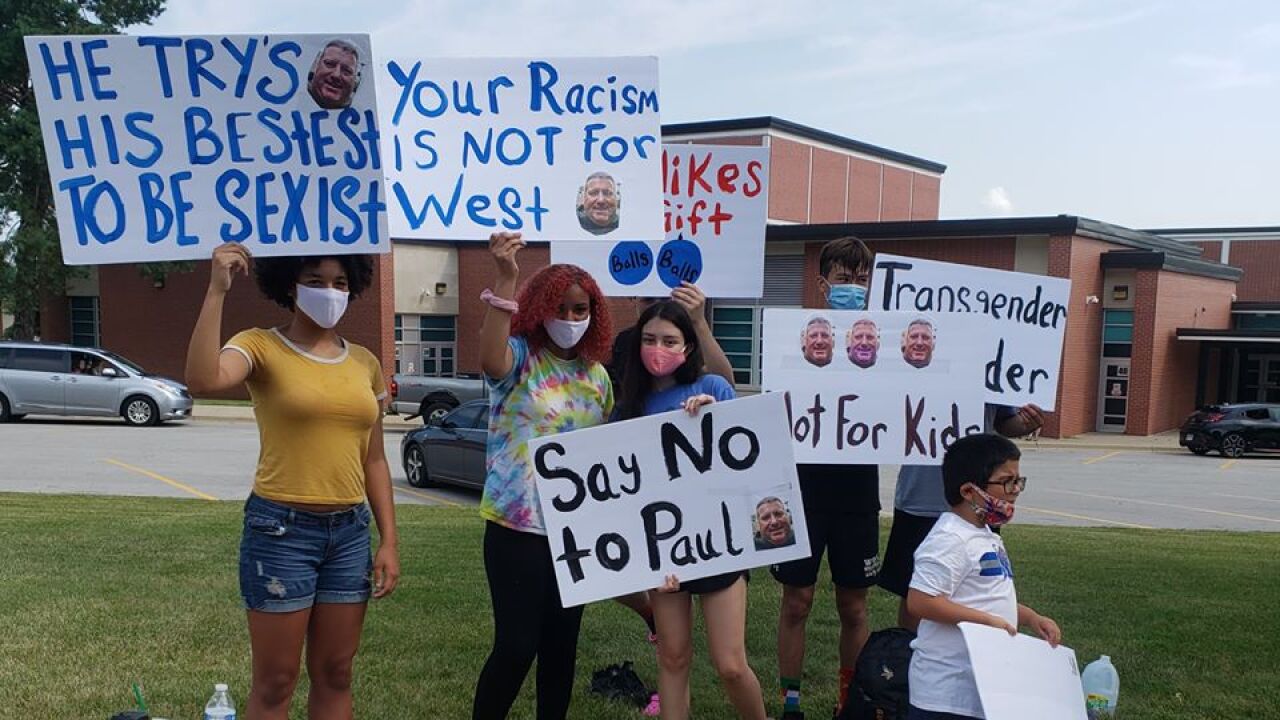 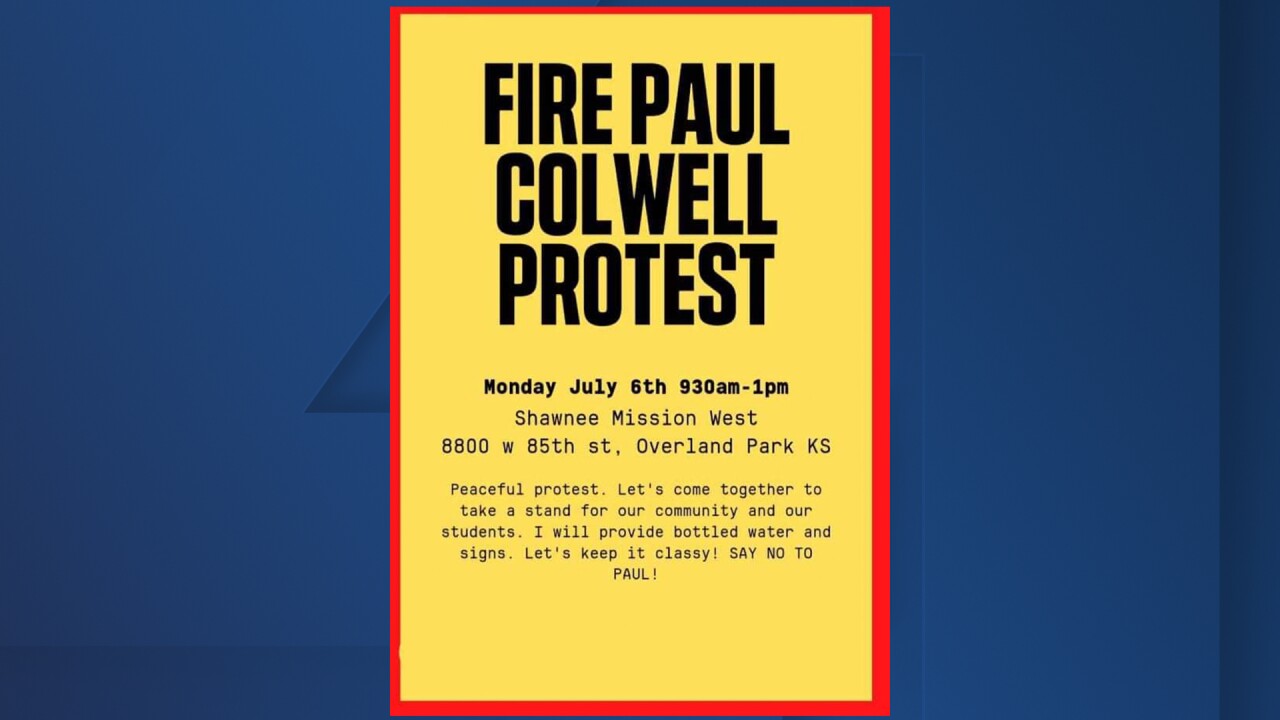 Since that article was published, the school district notified parents that former Horizons High School Principal Paul Colwell was on "modified duty," putting his move to another school on hold – for now. But the possibility that he could still take a job as assistant principal at Shawnee Mission West prompted a protest outside that school Monday.

Among those who attended was 16-year-old Angelina Williams, who will be a junior this year.

Williams described the campus as diverse, open and inclusive. But she and fellow protesters said they worry that could change under Colwell's leadership if he assumes a role as assistant principal.

"I'm out here today because I don't want this man in our schools at all," Williams said.

"When I talk to someone, I want to feel safe, when they're in a position of leadership," Garcia said.

Devon Johnson, whose daughter will attend the high school when she's older, also attended the protest.

"You got to have some good leadership up top before it can go downhill," Johnson said.

Their fears come on the heels of the Kansas City Star report that detailed multiple allegations against Colwell for creating what some students and staff labeled a "toxic culture" at Horizons High School during his five-year tenure there as principal.

Colwell, according to the Star’s reporting, told staff he was taking a job as vice principal at Shawnee Mission West this coming school year. That possibility prompted Williams' mother to start on an online petition last week, protesting Colwell's hiring. So far it has been signed by more than 1,300 people.

"So high school is difficult enough,” Megan Williams said. “Schools are supposed to be safe places for our kids, our teachers. And you have an administrator who is making their lives harder? That's not needed.”

41 Action News reached out to Colwell for comment by phone and email and has not received a response. However, he told the Star "a lot of what is out there is inaccurate.”

Members of the school board also declined 41 Action News’ requests for an interview, citing an independent investigation they authorized into these allegations concerning Colwell earlier this past week, after the Star's report was published.

"The purpose of the independent investigation is to address personnel and student issues. And it's being done because of the public nature of this issue and the need to investigate information that recently became available," SMSD Superintendent Mike Fulton said during last week's special board meeting.

This is actually the second investigation the school board has conducted involving Colwell – although, according to the school board, this one will cost taxpayers $45,000.

Since the news broke, the district informed parents in a letter that Colwell was on modified duty while the investigation into complaints continues.

The Superintendent said there is "an immediate administrative vacancy at West," although it's unclear if Colwell could still be considered for the job.

Williams and other families who were at the protest hope his name is no longer in the running, passing along this message to the school board.

"So, number one, we are asking for Paul Colwell to be fired from the district instead of moving around the district,” Megan Williams said, “and also for the district to not continue to move problems around but to really protect the students and teachers. If they have a specific person that's been an issue, you don't pass them around to another school and hope the problem is going to go away.”

The letter sent out to her and other Shawnee Mission West parents said their principal will share more information once the selection process to choose a vice principal is complete.

A spokesman for the school district confirmed Mike Isaacson, a former principal at Fairfax Learning Center in Kansas City, Kansas, will take Colwell's spot at Horizons.

This also is not the first time Colwell’s name has been tied to controversy.

In 2012, while Colwell was principal at Turner High School, he was named in a lawsuit filed by a parent who alleged the school conducted an improper strip search of her daughter based on a tip that was later discredited. While Colwell wasn't part of the search, the girl's mother claimed he authorized it.

A judge ultimately dismissed the suit claiming the family failed to prove a constitutional right was violated. However a judge noted that "there are several alleged facts that are very concerning to the court including the school officials' failure to corroborate the student-informant's tip and the manner of the subsequent search."