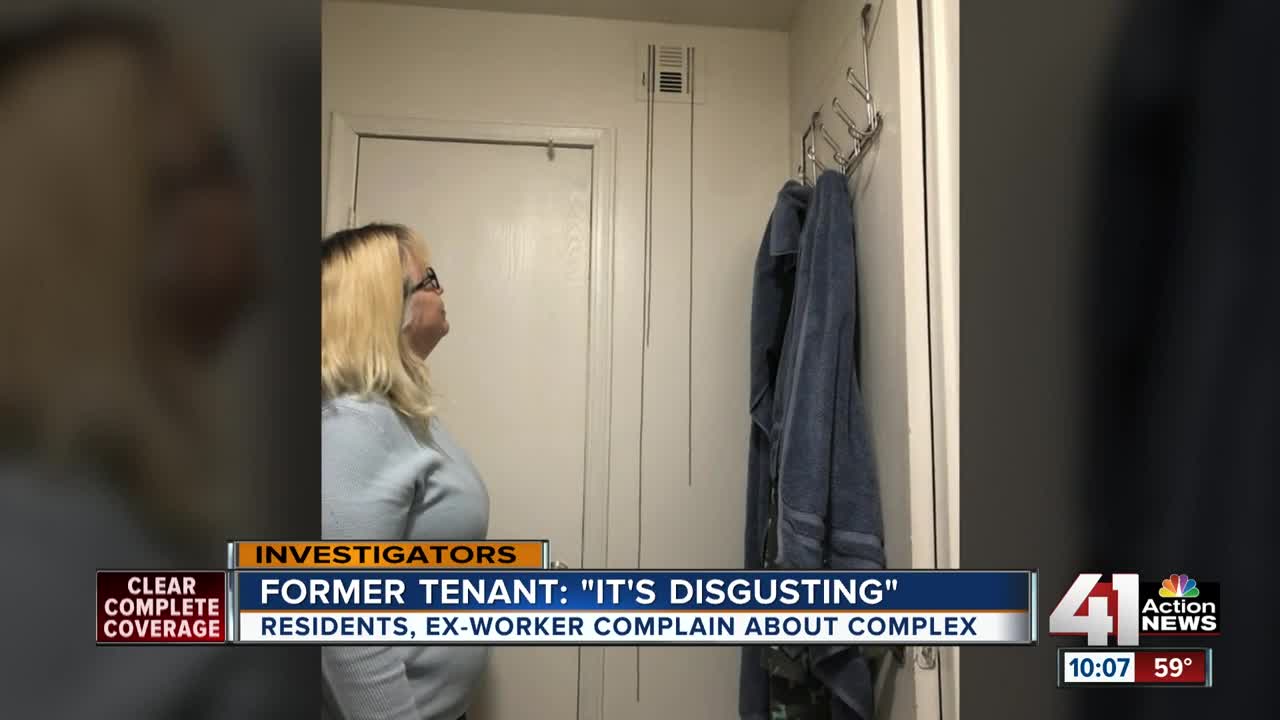 Flooding, mold, electrical problems and a systematic neglect and abuse of tenants are some of the complaints against the owners and managers of an Overland Park apartment complex. 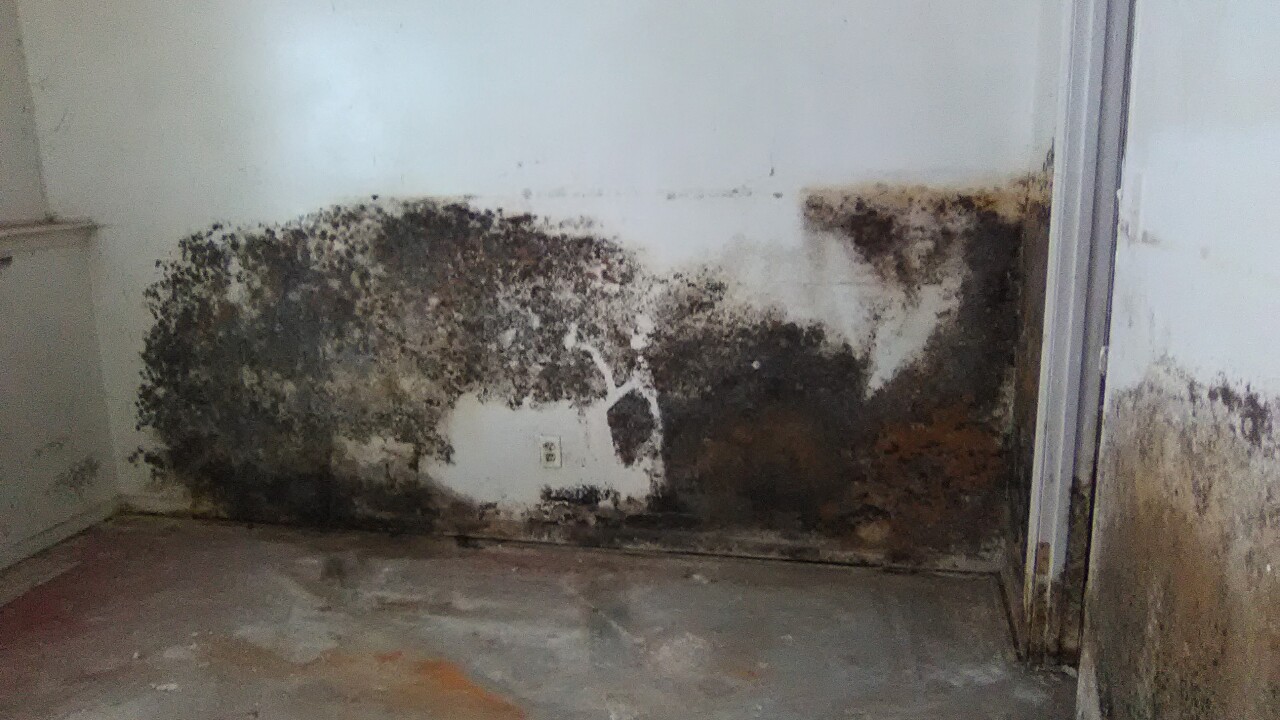 OVERLAND PARK, Kan. — Flooding, mold, electrical problems and a systematic neglect and abuse of tenants are some of the complaints against the owners and managers of an Overland Park apartment complex.

Since the 41 Action News Investigators first looked at the 79 Metcalf apartment complex last November, new complaints have emerged not only from tenants, but also from a former maintenance man who worked at the complex.

Katelyn Fortson gave the 41 Action News Investigators a series of pictures which she says show how a water leak progressed to the point it dripped all over her infant daughter asleep in her crib.

Fortson took the photos at her apartment in the 79 Metcalf complex.

"I put my hand on her head and she is completely drenched in nasty, disgusting, brown water from head to toe not just a little bit, her entire mattress was soaked," Fortson said of her infant daughter. "The water was still dripping all over her so she could've easily drowned in her sleep."

Fortson says she complained to management.

But she says nobody came to look at the apartment for a week.

Management eventually moved her into another apartment she says was infested with roaches.

"The first night, we realized that it's infested with roaches and when I say infested, I'm not talking about a couple roaches," she said. "It's disgusting. They're coming out of every crack. They're in the bathroom everywhere. It's just crazy.

Fortson says when she told the complex management she was moving out and wanted her $2,300 deposit back, she didn't get it.

The mother of two young children says it took her four months to save up enough money for that deposit.

"You can see the upgrades to the outside all day long. Everything is brand new, the office is brand new," Fortson said. "When you go inside the units, they are complete filth. They do not take care of the people that are paying them. The management is disgusting and rude. I would try anything before I went there. You're giving your money away to be in filth."

Steve Mirikian, an attorney representing the owners, told 41 Action News, "The allegations with regard to the ceiling leak are misleading in the extreme. While it is true that, due to a roof leak that resulted from a clogged scupper, water leaked into the ceiling resulting in a ceiling leak, neither the leak from the roof nor the problem with the ceiling was known to my client or had been reported by the tenant prior to the time of the partial ceiling leak."

Mirikian also states as soon the problem was known, Fortson was moved to another apartment and he supplied pictures he says were of that unit in good condition when Fortson moved in.

"Not long afterwards however, the tenant, who had damaged the new apartment, "skipped" out without paying rent," Mirikian said. "It is our belief that the report to you by this tenant is an effort to preclude an action to recover the unpaid rent."

Fortson isn't the only tenant to complain about her living conditions at 79 Metcalf.

Samantha Allen sent us pictures of her former apartment she moved into in February, as well as a series of emails to management complaining about it.

In the first one dated Feb. 7, Allen complained of no heat, paint in the shower, the entire carpet was not clean, grout was all over, the toilet wouldn't stop running, the patio door had no lock, used condoms, roach clips, cigarette butts, hat and trash were left behind, and a stove so dirty that once turned on, the smoke detector went off and the furnace wall mounts which spark and could cause a fire.

In a follow up email on Feb. 26, she notes there's a hole in the ceiling with dripping water. She also pointed out there was no hot water, a faulty dishwasher and mailbox keys that didn't work.

Allen writes at that point in the entire month of February, she was able to live in her apartment only seven days without a maintenance emergency and still with no dishwasher or hot water.

In an email two days later on Feb. 28, Allen wrote, "I was told earlier this week that someone was coming that day to deal with the huge hole in my ceiling, hot water tank, dishwasher, tar on walls and door and mailbox key. Today is Feb. 28, the last day of the month and none of the issues above have been addressed. I will be covering the hole in the bathroom because the upstairs apartment can see through the hole into my toilet and tub."

One day Allen says she came home to her door wide open and all her lights on.

She found her broken dishwasher had been taken with all her dishes in it.

A document obtained by the 41 Action News Investigators shows Allen had to call Overland Park Police to get her dishes returned.

She too left the complex and says she asked for her deposit back multiple times and didn't get it. She says only after a lawyer intervened was she able to get her deposit returned.

In a written response, Mirikian says "This situation resulted from substandard workmanship by one of the complex's flooring contractors in the apartment above Samantha's apartment. When Samantha reported the problem in her apartment, which has been entirely corrected, as has the condition in the apartment above, my client promptly apologized to her and offered to relocate her to another unit."

Mirikian says Allen chose to move and was given a full refund.

However, Allen says when she addressed her concerns with the owner, he screamed at her and told her if she moved, "he would mess up my credit so bad even Obama couldn't help me get a house." She also says she asked many times to move to another unit and was never able to get a response.

Mirikian says the owners were unaware of any unresolved complaint from Allen.

Not only have tenants complained to the 41 Action News Investigators about conditions at the 79 Metcalf complex, so has former maintenance man Marcus Kenyon.

"It's probably one of the most unprofessional apartment complexes I've ever seen," Kenyon said. "I was stressed every day when I left there because it was appalling what was going on there, totally appalling. I wouldn't let my dog live there and that's saying a lot, I like my dog."

Kenyon, who says he's worked at apartment complexes for 30 years, worked at 79 Metcalf for about two months and provided the 41 Action News Investigators with numerous pictures to back up his claims.

Among the issues he says he found was mold, not treated, but painted over by workers with insufficient protection.

Kenyon says he also found multiple electrical problems and even a homeless camp at the complex.

One problem especially bothered him.

He says the kitchen floor in a woman's apartment was rotting out from underneath her and he repeatedly brought the problem to management's attention.

"They just kind of blew it off, put me on other things so that woman is still living in a situation where she could possibly fall through the floor," Kenyon said. "They really don't care. You can bring all these issues up over and over again and there's absolutely nothing being done about it. It's not like they can't afford to take care of these tenants, they just refuse to do so. If a tenant complains, they find a reason to get rid of them."

Kenyon also says he warned complex manager and part owner Nevin Dewar about snow and ice removal and about ice sliding off the roofs of the buildings, possibly injuring or killing someone.

"He said that's okay, they sign releases before they move in," Kenyon said was Dewar's response.

Nevin Dewar and his father Vijay own the apartment complex under the Kansas limited liability company 79Metcalf LLC.

The 41 Action News Investigators have made multiple attempts to specifically speak to Nevin Dewar on camera.

The 41 Action News Investigators even went to Dewar's home to get his side of the story.

But when he went out to his car on the street and saw us coming, he ran away back into his house.

After the 41 Action News Investigators showed all the pictures we obtained to Mirikian, the Dewars' attorney, Mirikian sent back new pictures showing a rusted water heater had been replaced with a new one, electrical box doors were installed where there they hadn't been previously and pictures of snow removal on the property.

Mirikian says potential tenants are never shown those apartments and the entire complex is in the process of being remodeled.

Kenyon says that's not what Nevin told him.

"He said we're just trying to get out from underneath this thing, told me straight to my face," Kenyon said.

In response, Mirikian sent a written statement from property manager Patty Marshal which claims Kenyon failed to do his job properly, including fixing a leak in an apartment.

"As a result of his ineptitude, we had to have the wall board removed and re-sheet rocked," Marshal's statement said. "Marcus left an old broken sliding glass door on his tenant's patio after proclaiming his love for safety. He seemed to show no regard for the safety of the tenant."

Mirikian added that, "Marcus abruptly quit after surreptitiously providing to you photographs of areas in the complex that needed work. Some of the photos, however, show areas that may have been damaged due to vandalism and other areas that, quite frankly, are simply storage rooms that do not require work."

Kenyon in response says he's caught them in several lies and has met with his own attorney about possible civil action.

Mirikian did offer the 41 Action News Investigators an opportunity for a sit down on camera interview with his client's representative, but not his client, the Dewars.

That offer was also made on the condition the story wouldn't be published or put on air for at least two weeks after the long scheduled date because that unnamed representative wouldn't be available until then.