A man the FBI shot and killed Tuesday in Belton while serving a warrant to stop a terrorism plot has frequented neo-Nazi chatrooms.

BELTON, Mo. — A man the FBI shot and killed in Belton Tuesday afternoon to stop a terrorism plot has frequented Neo-Nazi chatrooms.

The FBI says 36-year-old Timothy Wilson was planning to bomb an unnamed hospital.

The agency also says Wilson "was motivated by racial, religious and anti-government animus".

Based on tips, Nick Martin, who writes for the website "The Informant" says he found Wilson's Facebook page and his chat name Werwolfe 84 being used on Neo-Nazi chatrooms.

Squire didn't know who Werwolfe 84 was until Martin told her.

But she'd been following Wilson's posts as part of her research on hate groups.

She found Werwolfe 84 on two Neo-Nazi chat groups, including one chat channel he served as administrator for the National Socialist Movement or NSM.

"He had hundreds, probably a thousand once I get down to doing the analysis of posts, on each of those chat channels, especially the NSM channel where he was the administrator," Squire said.

Squire sent several screen shots of posts she found from Werwolfe 84 including one which reads in part, "Monkeys roaming around killing white people. Mark my words, it's coming. I hope people are ready."

"Most of them are pretty vile, nobody would ever want to read," Squire said.

She also sent us a screen shot Werwolfe 84 posted within two hours of the FBI fatally shooting Wilson.

Speaking about the Covid-19 pandemic and reaction to it Werwolfe 84 posts in part, "If you don't think the whole thing was engineered by Jews as a power grab, here is more proof of their plans". 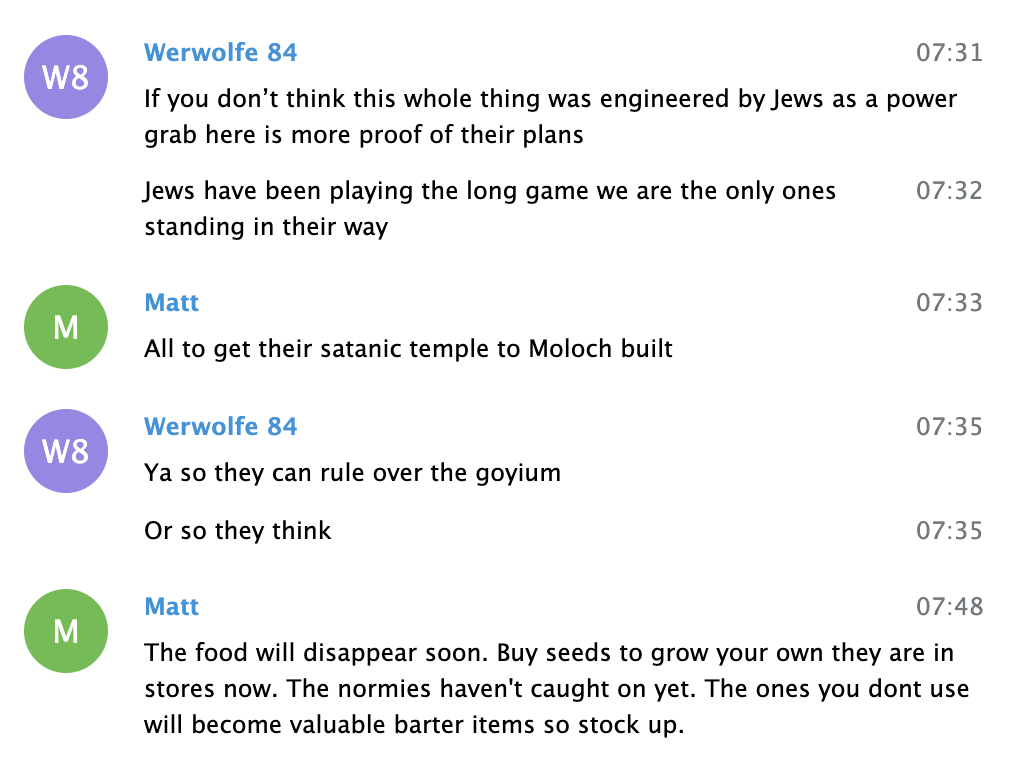 She believes Werwolfe 84 was Wilson, as Martin's tip noted, based on other people's posts after the fatal shooting.

"The folks on the chat were discussing that it was him, being sad about it, talking about what a great racist he was," Squire said.

The Elon professor also notes, despite all the posts she gathered, there was little or no information about specific plans.

She says those plans were likely discussed on encrypted websites she can't access, but the FBI likely did.

Misty Warren was working across the street from that facility at Meyer Construction Tuesday afternoon when she heard what turned out to be gunfire.

"We just heard like a loud boom. First I thought it was a transformer blow or whatever. And then all of a sudden, it was just several boom, boom, boom, boom like it was firecrackers," Warren said.

When she looked out the window, she says she could see several law enforcement officers with their guns drawn and Wilson lying on the ground.

"It caught us off guard. We weren't notified that this was going to be a sting going on," Warren said.

She said the next day on Wednesday, the FBI came by Meyer Construction to see if the shooting caused any damages to business.

The 41 Action News Investigators also discovered Wilson used to live with his estranged wife at a duplex in the Northland.

The owner of that duplex told a neighbor Wilson used to rent from him, but then moved out because he and his wife were going through a divorce when the fatal shooting took place.

That neighbor, Jennifer Garry, says in the last couple of weeks, there have been lots of cars at the duplex.

Garry especially noted there were what appeared to be undercover police cars outside the duplex on Tuesday, the same day as the fatal shooting.

The 41 Action News Investigators knocked on the door and rang the doorbell of that home several times.

Nobody answered even though another neighbor said a vehicle in the driveway likely indicated Wilson's estranged wife was home.