Compares unfavorably to 10 other similar cities

A report put together by the Unified Government's Chief Financial Officer shows KCK compares unfavorably to 10 other similar cities.

Kathleen VonAchen prepared the report and presented it to UG Commissioners in December in advance of putting together the next year's budget.

One of the first examples she showed commissioners was a bar graph with assessed market value per person or per capita. 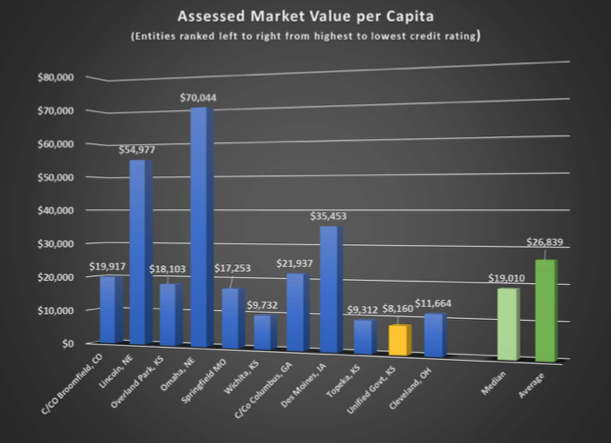 The UG came in dead last among the peer cities VonAchen chose at $8,160 per capita.

"The need to improve our assessed value throughout our county is greatly demonstrated by this graph," VonAchen said.

While the UG's assessed property value is low compared to the 10 cities, it's debt is much higher than those cities.

In a second graph VonAchen showed commissioners, the UG's general obligation debt as a percentage of assessed property value is 22.6 percent, by far the highest percentage of any of the 10 other peer cities. 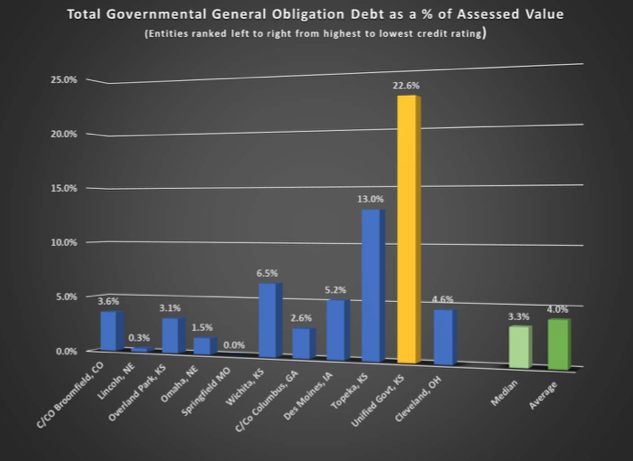 The average for all the peer cities is 4 percent with the second highest Topeka at 13 percent.

VonAchen says one reason the UG's debt is at a high level is because commissioners are spending more money on infrastructure projects in their districts than she's recommended in past budgets.

"We're trying to address that," she said.

Another graph shows the UG's general fund balance as a percentage of overall spending is again the worst of all the peer cities at 21 percent. 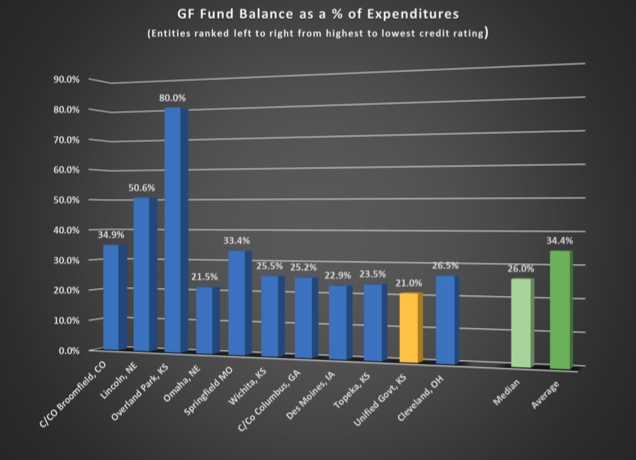 The best is Overland Park at 80 percent, with the average for all peer cities at 34.4 percent.

VonAchen also showed commissioners the high debt level has hurt the UG's credit rating and it's ability to borrow money at a lower interest rate.

Currently, the UG has a AA rating with Standard and Poor's, the highest rating is AAA.

The UG has an A1 rating with Moody's, the highest rating is Aaa.

VonAchen says, for example, if the UG was able to increase its Moody's credit rating from A1 to Aa2, it could mean an interest savings of $944,000 for a single $15 million bond over 10 years.

"They have to improve if we're going to improve from the level that we're at now," she said.

She points out that savings could be used for more street maintenance, public safety equipment or other investments.

VonAchen also says the assessed property value per capita is a statistic commonly used by ratings agencies like Moody's.

"Our assessed value per capita is at the bottom, even compared with Wichita or Topeka," she said.

Commissioner Ann Murguia was among the group of commissioners who received the December report. She says the solution is to aggressively grow Wyandotte County's tax base with new residents and new businesses.

She notes there's been great economic growth in the western part of the county in the Legends area, but not really anywhere else.

VonAchen says there are seven employees in the Economic Development Department tasked with growing the base.

"They are constantly looking for new ways to grow the tax base," VonAchen said.

She projects a budget shortfall in each of those years, with expenses exceeding tax revenues.

In other words, the UG won't bring in enough money to pay all its bills.

VonAchen projects the one time use of $3.8 million in the UG's reserves or savings for budget or fiscal year 2020.

She's also noted it is important to increase that reserve account to improve the UG's bond or credit rating, so dipping into that fund won't help that issue.

"Although economic indicators and tax revenues of the past 10 years reveal that the Unified Government of Wyandotte County/Kansas City, Kansas has rebounded from the Great Recession, this forecast reflects financial obligations, one-time retirement payouts and a possible recession in 2020 and/or 2021 that diminish the positive outlook in the future five year forecast," VonAchen wrote in her summary.

VonAchen projects a budget deficit in each year beginning in 2020 through 2024 totaling roughly $19.5 million combined.