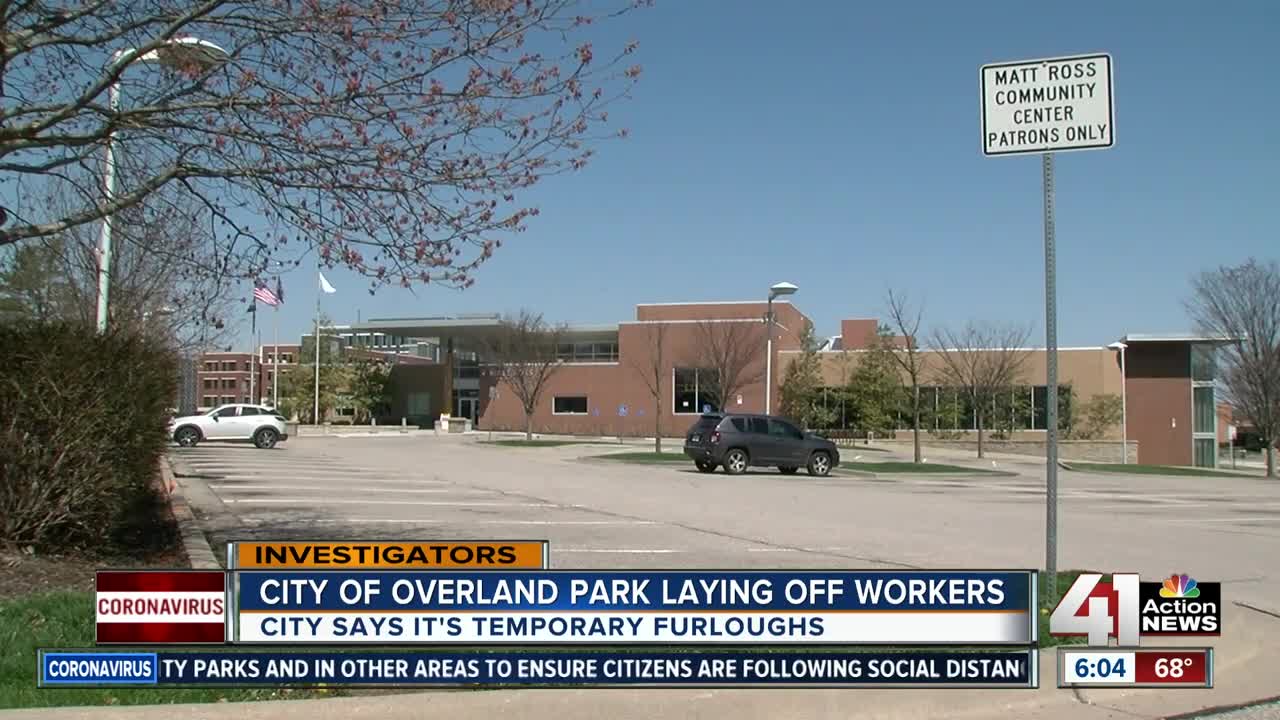 The second largest city in the metropolitan area is becoming the first one to - at least temporarily - lay off employees.

OVERLAND PARK, Kan. — The second largest city in the metropolitan area is becoming the first one to - at least temporarily - lay off employees.

Starting Sunday, about 200 part-time employees in Overland Park will be put on furlough.

Those people work in the city's two community centers, Matt Ross and Tomahawk, which are both closed.

The city also has a page on its website noting those closures and the shutdown of other programs and services due to the Coronavirus.

He also said the city is looking for other part-time jobs for some of those employees.

The total savings from the furlough would be about $80,000 a month.

"We just don't find it that necessary to panic so early and immediately put the pressure on the back of our most sensitive group of employees right now," Farassati said.

In addition to the furlough, all of the 1,438 city employees are having their current salaries frozen.

Many of those employees, including in public safety, were due to get a pay raise starting this past Sunday.

"It's absolutely true that our city manager has the authority to do it, but we wanted this to be done in consultation with the council," Farassati said.

In a statement from Fraternal Order of Police Lodge 21 President Mike Mosher, he notes the city's compensation package would've increased public safety salaries between 2 and 3.25 percent.

With an FOP membership that includes more than 225 front line responders, Mosher writes about COVID-19, "Although we are taking precautions to protect ourselves, we do not have the ability to 'work from home.' Our members are literally on the front lines of this fight."

Mosher argues the city should dip into its $48.8 million emergency or reserve fund to cover the pay raises.

"Our main objection at this point was to the first responders," Farassati said. "This is the rainy day that we were waiting for and we need to help our employees and our staff."

He also said the city could handle taking care of the furloughed employees for several months with little impact to the city budget.

Farassati also believes the city is in a tougher financial position because of millions of dollars of property tax giveaways used as incentives for private businesses.

"Why is it that the city of Overland Park, with the highest family income in metro Kansas City, is the first city that furloughs people and does a pay freeze basically? Some of the actions that we've done are catching up with us," he said.

According to Reilly, Ebel made the decision because major retailers like the Oak Park Mall, for example, are closed along with many other businesses.

Reilly said 36 percent of Overland Park's revenue comes from sales taxes with the rest of the revenue coming from property taxes and assorted fees.

How big a revenue hit the city may take from all the closed or affected businesses is unclear.

But he said Ebel has the responsibility to balance the city budget and is taking the actions in advance of the expected tax revenue drop.

Reilly said during the recession years between 2008 and 2011, Overland Park took $40 million out of its reserve fund to keep the government doors open.

He notes if you dip into that fund too much, it affects the city's ability to borrow money for projects like road and other infrastructure improvements.

The city currently has the highest possible AAA bond rating, meaning it can get the best possible interest rate to borrow money.

Farassati said he doubts a relatively small withdrawal from that fund would impact the city's bond rating.

And he said even if it did, it's more important to take care of the city's employees.

Reilly said city projects are also being reviewed and could be cut or postponed.