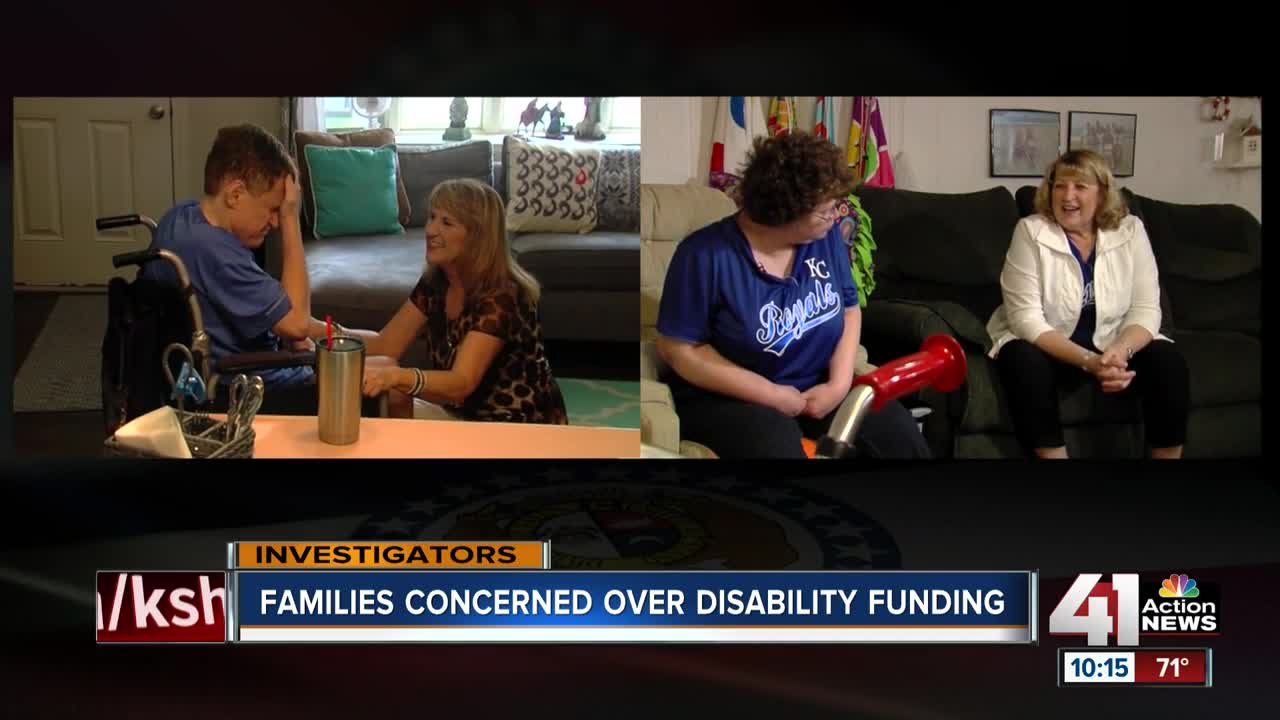 They are some of the most vulnerable people in our society, and parents claim Missouri's bureaucracy is making it more difficult to care for their adult-aged developmentally disabled children. 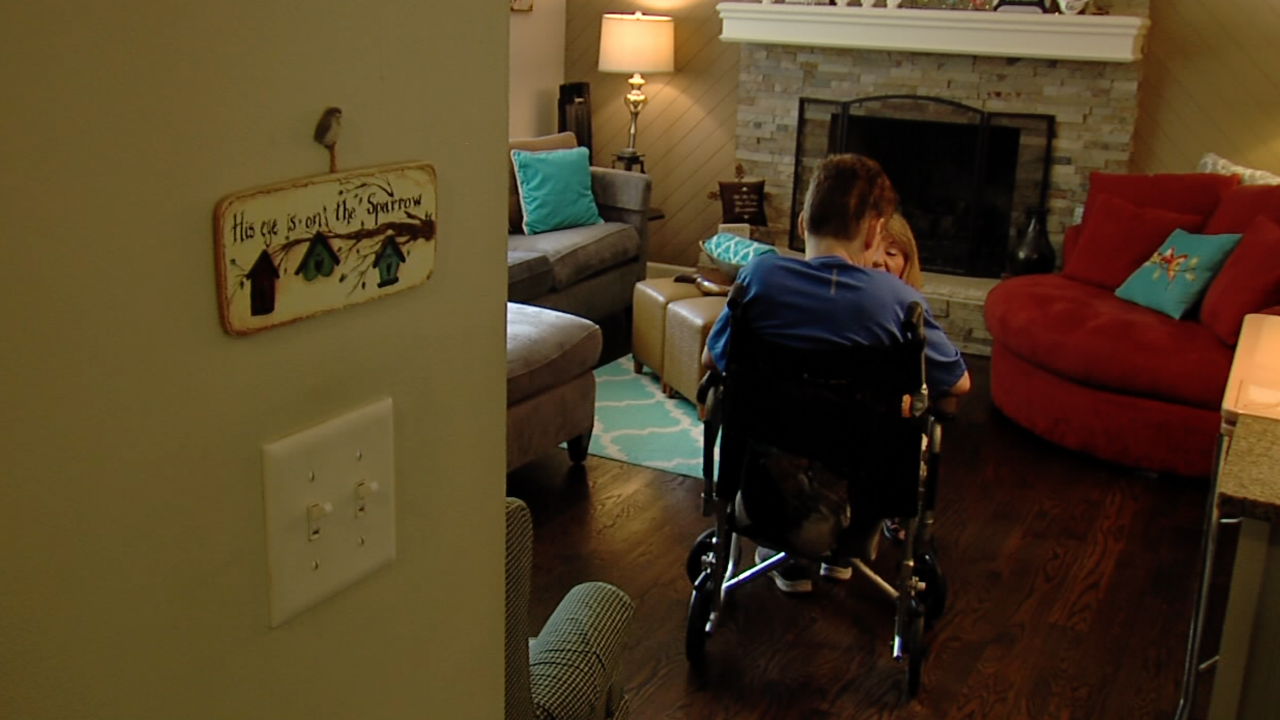 BLUE SPRINGS, Mo. — They are some of the most vulnerable people in our society, and parents claim Missouri's bureaucracy is making it more difficult to care for their adult-aged developmentally disabled children.

It's an everyday challenge for Kelsey Mack to get around her Blue Springs home.

"Are you coming up the stairs?" Kelsey's mom, Diane Mack, asked her.

"Yes, I am mom," Kelsey replied as a hired assistant guarded Kelsey from behind.

She has numerous medical problems and has lived through 54 surgeries.

"They didn't think she'd live three months and she's 42 and the doctors say well that's because of you," Diane said.

"What makes you happy in your life Kelsey," Diane asked her daughter.

Missouri's Department of Mental Health's Division of Developmental Disabilities administers that combination of federal and state money to provide around the clock care.

"Typically, we want people to stay in their homes as long as they can and we want to give them as much support as they can so they can live in their homes," Valerie Huhn, Director of Missouri's Division of Developmental Disabilities said.

The state must maintain compliance.

But Diane Mack says she's been in a decades long battle with the state of Missouri to get the necessary funding to keep Kelsey at home.

She said the Division of Developmental Disabilities routinely denies funding as soon as a client chooses a placement outside of a state contracted facility.

Mack also said challenging the state means clients and their families must attend dozens of hearings, appeals and even threats to reduce hourly services.

For example, in 2003, Diane received a letter from Kelsey's service coordinator to find out if Kelsey was dying.

"I think it took them four years to respond to her wanting to stay at home. And we got a letter from the state that said if she's in hospice care or dying, they'll allow her to live at home," Diane said.

Even getting a new walker, which Kelsey needs every year, has been a challenge.

Kelsey is currently using one cobbled together with old parts.

"There shouldn't be 60, to 70, to 80-year-old parents wondering if their child is on a waiver or has any funding or a program," Diane said.

Kelsey Mack's living situation is far more the exception than the norm.

According to records the 41 Action News Investigators obtained, far more Missourians on the Comprehensive Medicaid Waiver who are getting 24-hour-a-day care live outside of their family homes in state contracted facilities.

Those same records show those state run facilities are far more expensive in both Missouri and Kansas than living at home with outside help.

Missouri is currently phasing out group homes, which consist of four to a maximum of eight people living in the same place where they receive care.

While Missouri is moving away from group homes, the state is relying more heavily on what's called Individualized Supported Living or ISLs.

It's a way for some developmentally disabled people to live outside the home with varying degrees of support.

By comparison, the number of clients in self-directed in home budgets was 1,156 in 2014.

There were still nearly three times the number of ISL clients in 2018 than self-directed in home clients.

And the average cost for all self-directed, or in home, clients in that year was significantly cheaper, at $20,609. The most expensive self-directed in home client in budget year 2018 was $145,626.48.

Both ISLs and self-directed care clients can have help as little as a few hours per week or as much as around the clock care, but Huhn says ISL clients generally need more assistance to live on their own and there are more people who access services at home who don't need as much care.

"You may be only self-directing eight hours of personal care a week, which is a whole lot different than someone who gets 24 hours of care a week," she said.

But Diane Mack is unconvinced.

She was so upset by the difference in costs that she became a contractor with the state from 2004 through 2007.

"I couldn't get any answers of why it costs so much to live in a facility and these facilities were not good places. I gave three years of my life and the sad part is I missed the life of my other children," Mack said wiping away tears.

In Kansas, the Kansas Department for Aging and Disability Services ,or KDADS, takes care of developmentally disabled clients.

Client care is performed in three main categories, and Residential Supports are given to clients who live outside the family home.

There are 205 residential service providers in Kansas, Personal Care Services are typically done in a client's own home and Day Supports are agency directed services involving an activity or Day Center outside the home.

In the current budget year, which began in July, there are an estimated 5,374 Residential Supports clients in Kansas.

The average cost per client is estimated at $41,684.23 for the year with a total Residential Supports budget of over $224 million.

The largest client base is for Day Supports outside the home at an estimated 6,616 clients.

The average cost per client is $16,681.04 with a total Day Supports budget this year estimated at over $110 million.

Lori Latta has also battled with the state of Missouri to keep her now 48-year-old son Jeff home.

Like Kelsey Mack, Jeff was born prematurely and is severely disabled.

Several years ago, the state was able to get a court order to take Jeff out of his home without Lori being able to reply.

For four years, Lori says Jeff was institutionalized and heavily medicated before she was able to get him back home.

"I don't understand why, after four years, when he walked and talked and said 200 words when he went in, he came home in diapers and a wheelchair. He was debilitated in my opinion" she said.

But getting Jeff home presented a new problem.

Lori had to fight Missouri to get Jeff's caretakers paid after five months without paychecks, even though she estimated she's saved the state $500,000 in Jeff's care over the last five years by having him home instead of in an institution.

"The state doesn't even want to provide enough money for the 24-hour care enough to meet the budget. We're having to battle to just give him the quality of life that's really saving the taxpayers money," Latta said.

Lori Latta and Diane Mack also want to keep their adult children at home in part due to concerns about quality of care outside the home.

Mack acknowledges not everyone like Kelsey can stay at home, and there is a need for state run facilities.

"Absolutely, there has to be places like that, but there needs to be more oversight, more accountability," she said.

In the five year period from 2014 through 2018, state of Missouri records show 1,253 reports of physical, verbal or sexual assault against developmentally disabled people.

However, Huhn says only a small fraction of those complaints have been verified as true, but the Division of Developmental Disabilities didn't provide the number of verified cases.

"We talk about it a lot, so we can make sure that people understand you've got a responsibility to report it if you see it," she said.

Kansas keeps track of nurse and medical assistants who have confirmed cases of abuse, neglect and exploitation of patients in state run facilities, which includes nursing homes.

According to KDADS spokeswoman Cara Sloan Ramos, anyone appearing on that list can no longer work at a Kansas owned or contracted facility.

However, she said it doesn't prevent those people from working for private companies or individuals.

"Of course, you're more comfortable in your own home environment than you would be in an institution," Latta said.

"Do you like living here?," Diane Mack asked her daughter.

"I'm retirement age, there's no way I can. I have to have the income to provide for her," an emotional Diane Mack said.

"I would like to think that Jeff could be an example of what not to do, and let's do things better," she said.

According to Huhn, one of the biggest obstacles Missouri's Division of Developmental Disabilities faces is finding enough people to care for people like Kelsey Mack and Jeff Latta.

She also said the state was able to get rid of a waiting list for services for developmentally disabled Missourians in the 2014 - 15 budget year.