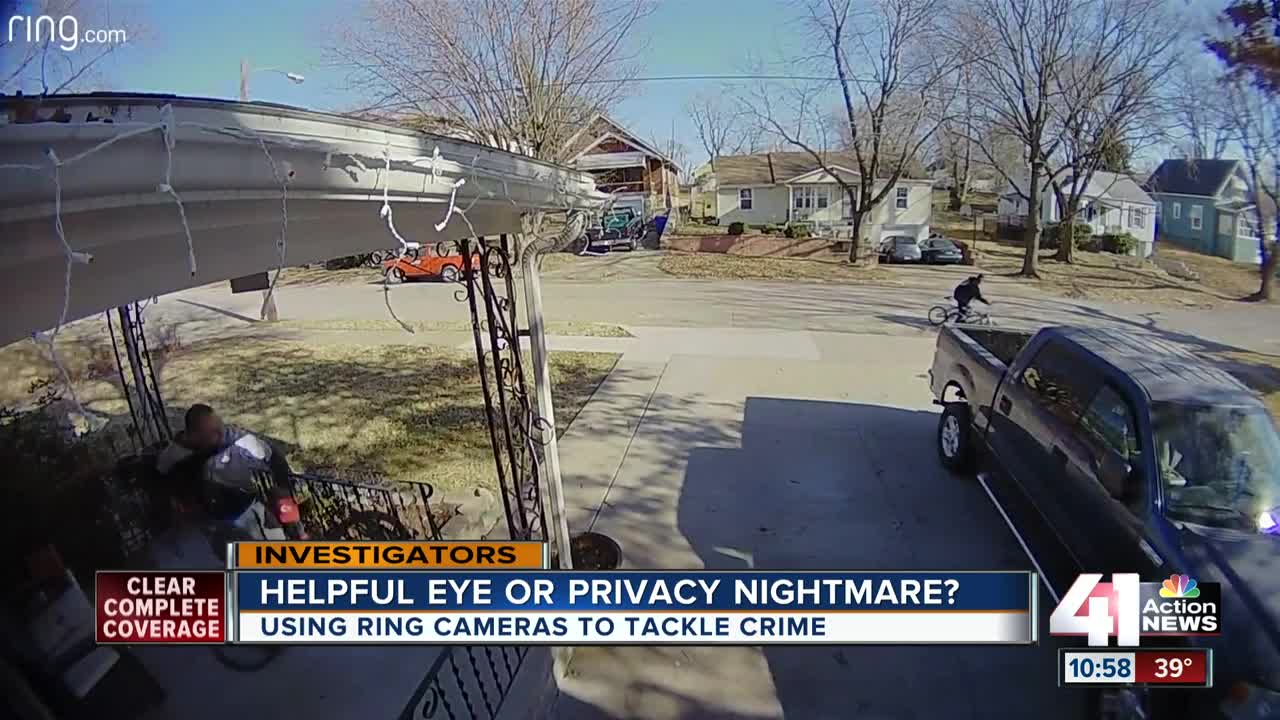 More than 400 police departments in the U.S. have inked partnerships with Ring, but the win-win picture isn't clear for privacy and civil liberty experts. 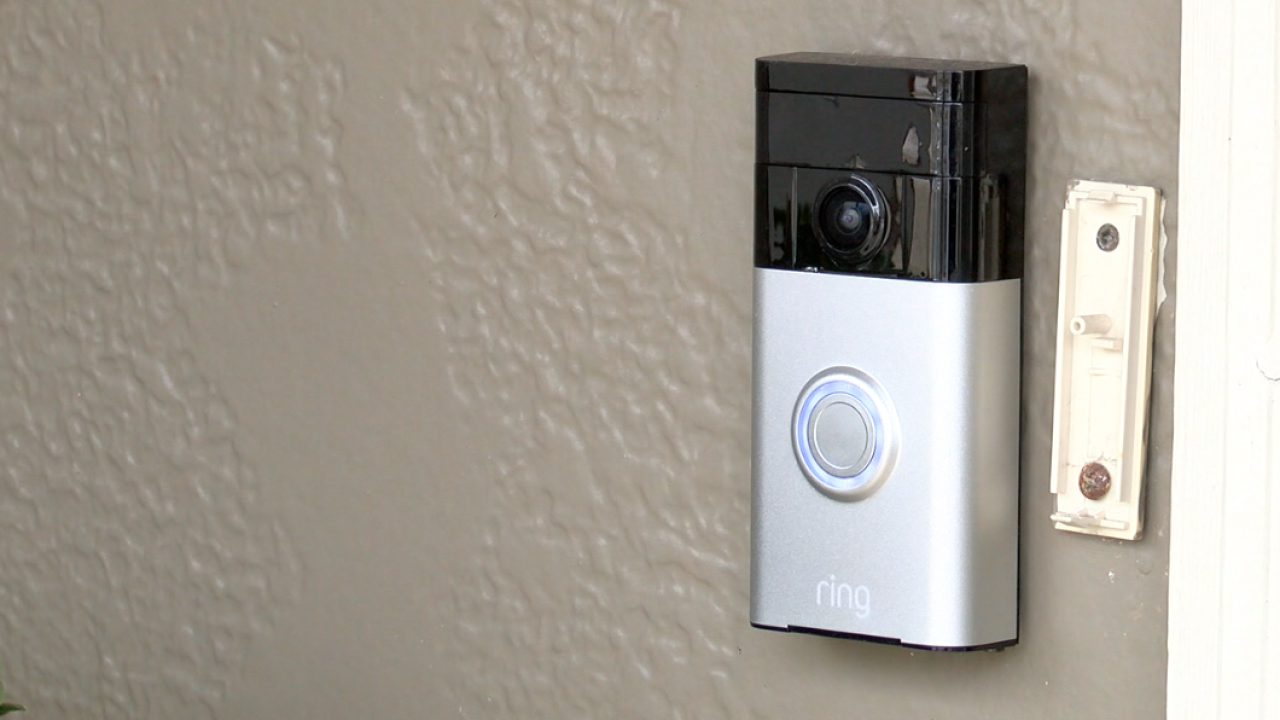 KANSAS CITY, Mo. — Front doors all over the country are equipped with Ring doorbell systems, making it increasingly possible to capture a crime and its aftermath on camera.

Seeing the benefits, more than 400 police departments in the U.S. have inked partnerships with the company, which was acquired by Amazon in April 2018.

The list includes more than a dozen cities in the metro, including Kansas City, Missouri, Independence and Lee's Summit on the Missouri side and Overland Park, Leawood and Kansas City, Kansas, on the Kansas side.

The partnerships are centered around an app called Neighbors by Ring. Through the platform, Ring users can share video, while those without cameras are able to post and comment. When a crime occurs, police can request footage from users in the area.

Through the partnership, the Kansas City, Missouri Police Department obtained footage of a person of interest in a November homicide at Linwood and Charlotte.

"That's a prime example. Ten years ago we would have no idea what the potential suspect or person of interest looked like," Sgt. Jake Becchina said.

KCPD was first approached by Ring at the end of 2017. The department was already several months into its WatchKC program, which encouraged home and business owners with surveillance cameras to register them with KCPD. The whole idea was to more efficiently connect police with video evidence in the event of a crime.

According to Becchina, Ring representatives told KCPD at the time there were roughly 10,000 of its doorbell cameras already in use in the city. The department saw a partnership with the company as a "no-brainer."

"Their goal obviously is to have more cameras, and then our goal is to lower crime through use of video footage as evidence. So it's kind of a win win," Becchina said.

The win-win picture isn't as clear for privacy and civil liberty experts, like those at the ACLU, who are concerned the agreements lead to invasions of privacy while also using police as a marketing arm for Ring.

"The question you need to ask is whether you're empowering yourself or whether you're not accidentally empowering somebody else, like the police or Amazon or hackers," ACLU Senior Policy Analyst Jay Stanley said.

Both the ACLU and the Electronic Freedom Foundation point to a couple red flags in the partnerships.

One example is the fact Ring has offered incentives to some departments for getting more people to use the Neighbors app.

"If people sign up for the app and use our unique code, then the city gets more cameras to give away," Becchina said.

KCPD received 50 Ring systems, which were given out through raffle drawings at neighborhood watch training sessions around the city. Becchina said the department has not been given any more cameras since then.

Recently the city of Leawood partnered with Ring to give 300 residents a $100 discount on the security systems.

A Ring spokesperson told the 41 Action News Investigators the company "does not require or force police to promote our products, nor do we dictate what police should say regarding Ring and the Neighbors app."

In regards to privacy concerns, Ring came under fire for providing police a heat map through the portal that showed the density of cameras in a particular area. That feature was disabled earlier this year.

Users remain anonymous in the app, identified to police only by numbers. When police request footage, Ring works as a conduit, sending that message to users who can decline.

But that doesn't mean your video can't be obtained. Ring can still provide the footage in response to a search warrant. The company also said it won't release user information to police except in response to a legal process.

However, the ACLU points out that is what Amazon says now, but it's a private company with policies that can change.

The privacy concerns didn't faze some of the homeowners who lined up for cameras at Leawood's event.

"As long as the cameras aren't in the house, I don't worry about sharing stuff that's outside," said Ryan Funk.

He picked up a Ring floodlight camera.

"I would prefer to add more safety than worry about my privacy," said Sheila Gill, another resident.

Ring doorbells aren't the only technology being promoted to police.

As Scripps investigators in Tampa uncovered, Amazon contacted some Ring partner agencies to market its facial recognition technology. Both Leawood and Kansas City police said they were not approached about that.

It's a concept the ACLU finds extremely disturbing.

"Facial recognition has the potential to basically allow the police to follow everybody everywhere they go, because it automatically recognizes you, where you are, when you're there and who you're with," Jay Stanley said.

That got the attention of U.S. Senator Edward Markey (D-Mass), who began questioning Ring in September.

In responses to the senator, the company said Ring "doesn't offer facial recognition in its services" and it "has no plans to coordinate with law enforcement regarding their use of Rekognition."

In response to a second round of questions, Ring said it had contemplated adding the technology, which other security cameras like Google Nest Hello already use.

Ring's Ukraine arm appears to already be working on implementation.

BuzzFeed News reported Ring Ukraine has an employee called the "head of face recognition research," and at one point the company's web page said its monitoring systems were based on the technology.

Amazon emailed the following statement to our Scripps station in Tampa:

The ACLU is once again knowingly misusing and misrepresenting Amazon Rekognition to make headlines. As we’ve said many times in the past, when used with the recommended 99% confidence threshold and as one part of a human driven decision, facial recognition technology can be used for a long list of beneficial purposes, from assisting in the identification of criminals to helping find missing children to inhibiting human trafficking. We continue to advocate for federal legislation of facial recognition technology to ensure responsible use, and we’ve shared our specific suggestions for this both privately with policy makers and on our blog.

Amazon
Copyright 2019 Scripps Media, Inc. All rights reserved. This material may not be published, broadcast, rewritten, or redistributed.