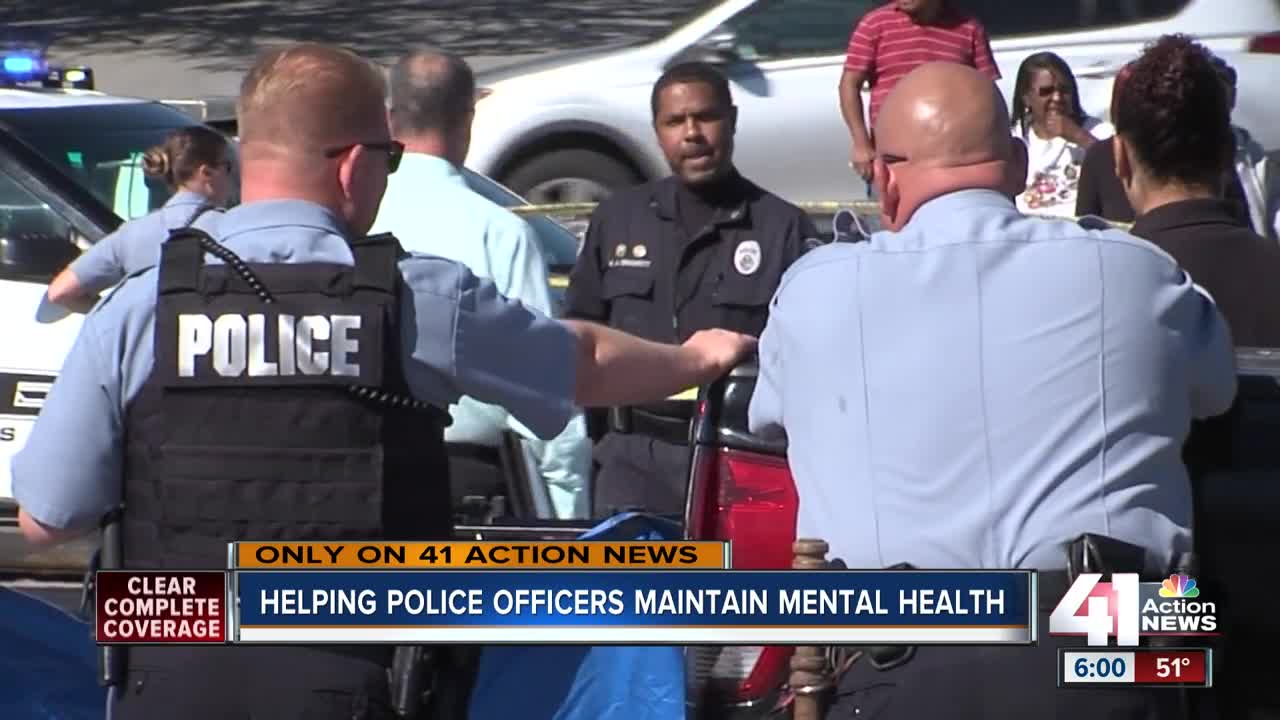 KANSAS CITY, Mo. — Mental health is a topic that many in law enforcement didn't want to talk about for decades, and many still don't.

In the last few years, police departments have started trying to change the stigma through training and peer support groups.

"The same skill that you have in seeing or identifying someone in mental crisis out on the street may be something you see similarly while you're at roll call sitting next to somebody," said Major Rance Quinn, a mental health instructor at KCKPD.

Quinn helps the department develop its crisis intervention team, in which officers work with licensed mental health professionals to improve the way they make contact with civilians in a crisis. Zeigler said in 2015, every officer was required to receive that training.

Facing their own mental health

As crisis intervention training has ramped up, so have peer support groups, where officers can talk to one another confidentially and freely. Dispatchers are also included in the groups.

Certain officers will be assigned to be the point person for their peers. They will document when they've had contact with a peer but will not share what was discussed, unless someone's life is in danger.

Most police departments around the metro, like KCKPD, have started an official peer support program within the last few years.

All departments have some sort of resource dedicated to employee mental health, whether it's an Employee Assistance Program (EAP) provided by the city or a police chaplain program.

Capt. Kathy Morgan with the Overland Park Police Department is one of 24 peer support officers. She helped the department launch its program around two years ago and said it's been very successful.

"It may just be a five-minute conversation. It doesn't have to be anything in-depth," Morgan said. "And these peer support individuals are people who are just good listeners, that's a huge part of it."

In KCK, Zeigler said his department is now putting an emphasis on taking care of their own. Mental health became even more of a priority after Officer Dave Melton and Detective Brad Lancaster were killed in the line of duty in separate incidents in 2016.

"When we lost Lancaster and Melton, one thing that became apparent to me is that we weren't doing a whole lot, we weren't doing a good job of trying to take care of the mental health of our officers," Zeigler said. "There is a compounding effect of the things you see on a daily basis that over the life of a 10-year, 20-year career, can destroy your life. It's one reason we have more suicides than we want to talk about. We have more divorces than we want to talk about."

Zeigler said the peer support program has made a huge difference in the way officers handle issues — both work and personal.

"Because we've all been through those ourselves," Quinn said.

On Dec. 3, KCKPD negotiated for more than 24 hours with a woman in crisis who had her children in a room at the Holiday Inn on Rainbow Boulevard and refused to come out. KCK police found out she was a 22-year veteran of the Kansas City, Missouri, Police Department who had been on administrative assignment since May.

Currently, KCPD does not have a peer support program and is working on enacting one.

"In situations like that where the person just does not have the ability to cope, then we need to be able to recognize that and say, 'hey they do need some help,'" Quinn said.

Zeigler said that as a leader, the shift in mental health stigmas starts with him, and he realized it when Melton and Lancaster were killed in 2016.

"To sit there and cry in front of your men and women, that's not how I came on the PD. It was, 'Suck it up, hold your composure, no emotions, get off work and go deal with it however you need to,'" he said.

Quinn said that "back in the day," officers were seen as weak if they expressed any sign of distress.

"We see these things over and over again and it becomes difficult to deal with. So, a lot of people will turn to self-medication. They'll start drinking alcohol or doing other things that begin to self-destruct who they are," Quinn said.

The exams cost $160 per hour and can take up to three hours. There could be more than one visit.

Before, there was no budget at all for the exams. Quinn said that the department had to choose who would get a wellness exam due to the money constraints. The officers who dealt with homicide or child abuse would be ranked as the highest priority.

"If you're aware of what happens to you physiologically, then you have the ability to overcome it. I just think it's important for the officers," Zeigler said.

Zeigler finalized his own divorce in January 2018 and says that being on the force definitely contributed to that. He uses his own experience as a teaching point in the academy.

“I wish somebody would have given me that book 27 years ago,” Zeigler said.

He said that mental health issues contribute, among other factors, to why his department’s recruitment and retainment numbers are shrinking. There are just four people in the upcoming training academy, where the number used to be around 15 to 20.

Mental health around the metro

41 Action News talked with most of the police departments around the metro to see what mental health resources they offer to their own officers. Most departments already have debriefings when something particularly traumatic happens, such as an officer-involved shooting.