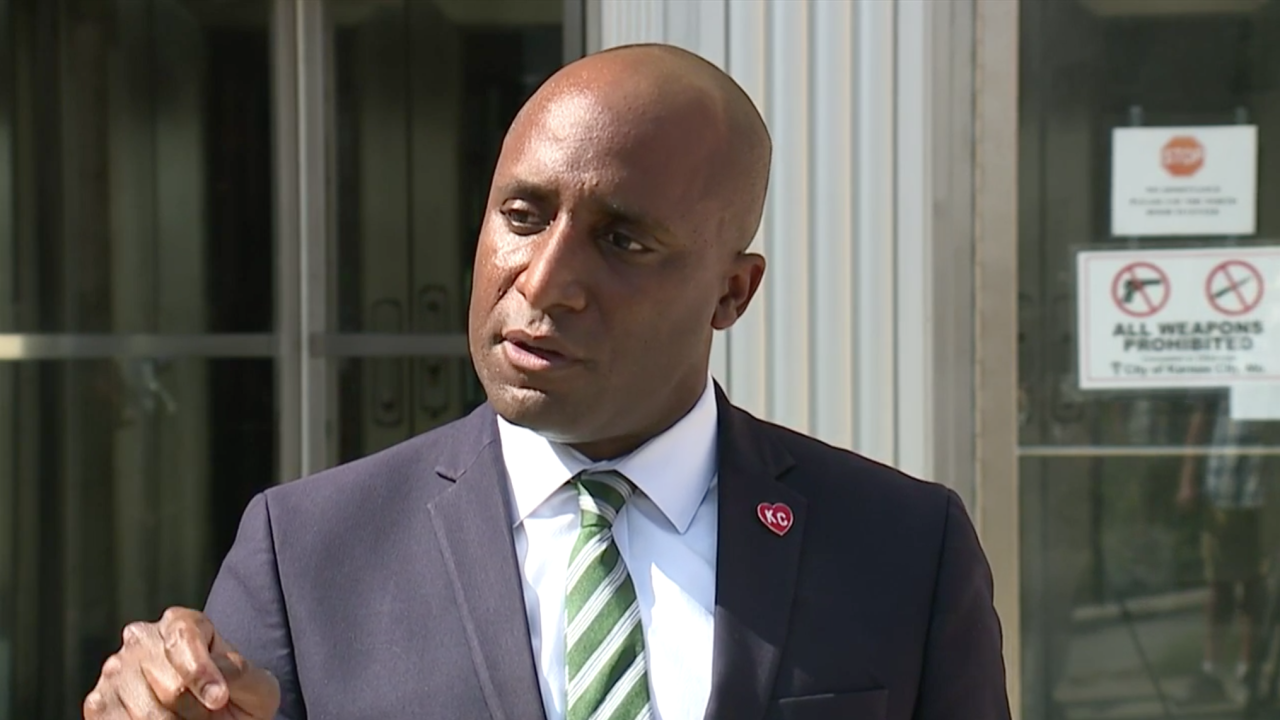 Copyright 2020 Scripps Media, Inc. All rights reserved. This material may not be published, broadcast, rewritten, or redistributed.
Al Miller/KSHB
Kansas City, Missouri, Mayor Quinton Lucas said Wednesday, July 22, 2020, he will continue to work with federal authorities on Operation Legend following President Donald Trump's announcement earlier in the afternoon that he plans to expand the operation to more cities.

KANSAS CITY, Mo. — Kansas City, Missouri, Mayor Quinton Lucas said Wednesday he will continue to work with federal authorities on Operation Legend following President Trump's announcement earlier in the afternoon that he plans to expand the operation to more cities.

Operation Legend is named after 4-year-old LeGend Taliferro, who was shot and killed while sleeping in his KCMO apartment.

The operation deployed hundreds of federal law enforcement personnel in Kansas City and several other cities in an effort to combat crime, though community members and Lucas himself have voiced their opposition to the increased presence. He signed a letter with other mayors, outlining concerns about the federal action.

Lucas said Operation Legend has been described to him “as a pinpointed operation that looks to solve uncleared murders, particularly murders of young people, particularly tough cases. And it uses resources, the federal government to do things like studying ballistics on firearms, does things like tracking illegal weapons across state lines.”

As long as the operation sticks to its purported purpose, it will have his support, Lucas said.

But he doesn’t want the operation “in any way” to be “what we have seen in Portland," where federal agents have been active in policing Black Lives Matter protests and have drawn criticism for their tactics.

Lucas said he is seeking clarification on a report from the attorney general that there have been 200 arrests made within the last two weeks, though only one had seemingly been reported so far in Kansas City.

Lucas said his goal is to get “consistent facts for how we’re handling this investigation.”

Trump made remarks Wednesday connecting an increase in violence to nationwide protests over police brutality. Lucas said he doesn’t believe that is the case and doesn’t believe there is data to support the president’s claims.

“To try to not just dog whistle, but frankly dog bark, about racial politics — it’s to try to divide our community and our country,” Lucas said. “It’s totally unnecessary and it doesn’t help us solve a single violent crime incident.”

Lucas also alleged Trump attempted to turn violent crime into a partisan issue when lost lives should matter regardless of a person’s political affiliation.

“This isn’t a political issue for us," Lucas said. "This is life and death. This is how our community lives, our community exists. That’s why I think it’s important for us when we talk about Operation Legend, to not talk about all this divisiveness, to not talk about Chicago’s failed, or Kansas City, or Albuquerque, or whatever other city — but instead to actually spend time and talk about how can we take substantial steps to make our communities safer.”

Like many mayors, I will continue to work with federal investigators and our @USAO_WDMO to help clear unsolved murders and other violent crimes. What we don't need are federal troops operating as riot police supplanting law enforcement in our city. https://t.co/potayYzsZt

Lucas also said Operation Legend should not be used for political gain.

"You don't have to make our community part of a political ploy in an election year,” Lucas said.

Trump said Operation Legend was “very successfully launched in Kansas City” and talked about LeGend, whose family was present at the briefing.

“LeGend is looking down, he’s very proud of you right now,” Trump said. “To LeGend’s family, we cannot begin to imagine your anguish and sorrow, but we solemnly promise to honor LeGend.”

LeGend’s mother, Charron Powell, said the operation has her full support and she wants it to be successful.

“I stand here today as a mother fighting against violence for my son, LeGend Taliferro,” Powell said. “My family and I support Operation Legend and we strongly want our community and everyone else behind us.”

Powell said it’s time for silence to come to an end.

“This operation is personal to us,” Powell said. “We have to take a stand in our communities and speak up.”

Lucas commended Powell in a statement released Wednesday after her comments.

“I want to note how immensely proud I am of Charron Powell for addressing the nation today in the name of her son, LeGend, who deserved to be able to grow up,” Lucas said. “Her strength and her advocacy serve as an important reminder that for families who have lost loved ones to violent crime, this operation is not just a political issue — this is about justice.”

More thoughts soon, but my heart continues to break for all families touched by violent crime. Our sympathy and our commitment to justice for victims’ families is not a partisan issue. We all grieve for them, want to prevent future tragedies, and want justice.