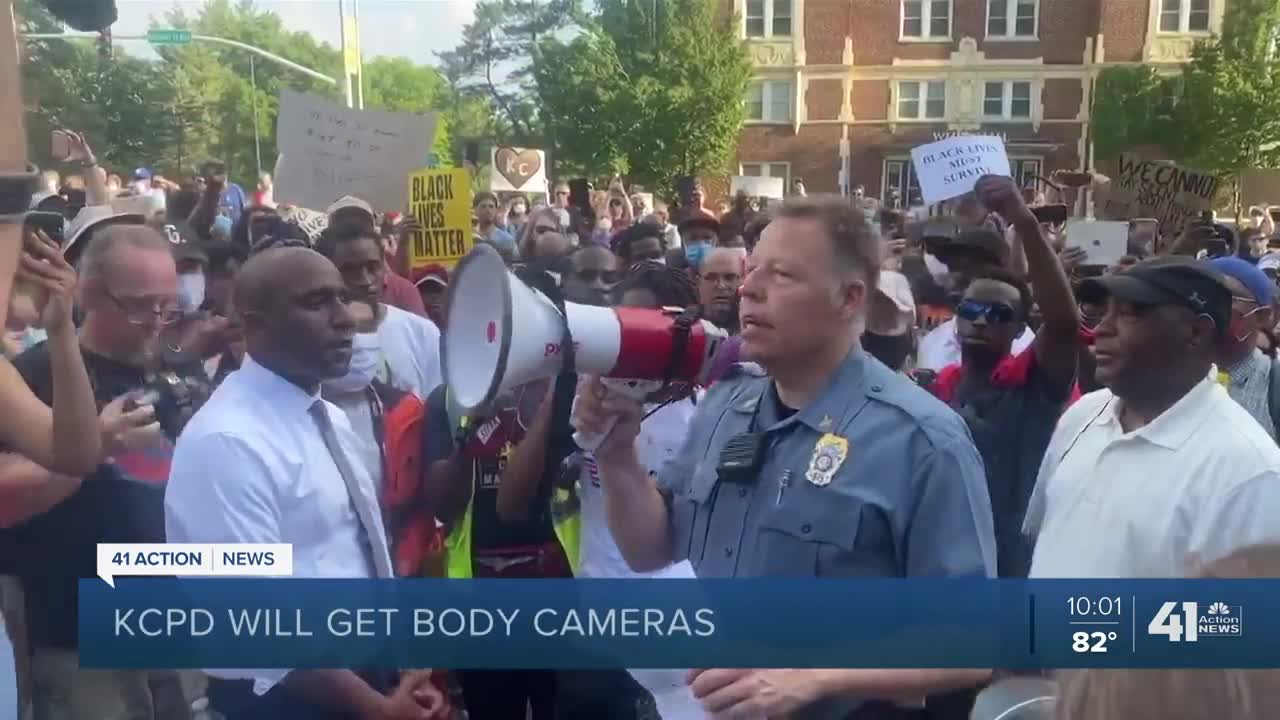 KANSAS CITY, Mo. — KANSAS CITY, Mo. - Kansas City, Missouri, Police Chief Rick Smith announced Wednesday at a Unity March with Mayor Quinton Lucas and protesters that the department had secured funding for body-worn cameras, which officers wear as part of their uniform while on patrol.

"I can't appreciate this community more," Smith said. "I mean, there [are] people in this community who have stepped up and tried to do so many things to try and bring peace and calm to our city and this is just one example of that."

The lack of body cameras, which provide a record of video record of officers' encounters with the public, had been a point of contention between KCPD and the Kansas City community, especially as protests over police brutality ramped up over the weekend.

"We want body cams," Henry Service, an attorney and a protest organizer, told 41 Action News on Sunday. "The only reason why we have a nationwide revolt is because of that eight- or nine-minute video where the cops are literally murdering another human being."

KCPD said the funding was provided by "generous community donors" after several business leaders reached out to the department and the Police Foundation of Kansas City to ask how they could fund the initiative.

The DeBruce Foundation was one of the donors, contributing $1 million for the department to be able to purchase the cameras.

"We believe in Kansas City and we want to be part of the solution for the future good of our community," the foundation said in a statement. "Both citizens and police agree body cameras are needed and a good next step, but there is not enough funding. It is time for foundations and business leaders to take action. That’s why The DeBruce Foundation is stepping up to lead this charge along with the Police Foundation."

"Although body cameras have existed in the last three cycles, I believe, of budget requests that it be a standing and foremost priority for this department," Nathan Garrett, president of the Kansas City Board of Police Commissioners said during their monthly meeting on April 14.

KCPD began exploring the idea of body cameras in Spring 2015, assigning a task force to examine how they could deploy the equipment.

"They believe that it would benefit the community and result in behavior by the officers and citizens. They thought it would provide excellent evidence in prosecutions," KCPD Deputy Chief Randy Hopkins, who has since retired, told the Board of Police Commissioners.

In September 2016, the department did a 90-day trial using 30 cameras as they tackled the issue of privacy and storage.

Then in June 2018, KCPD announced it would seek bids to purchase 1,000 body cameras. Since then, those efforts were hampered because of funding.

But now with money on the way, Smith said believes deploying them will be seamless.

KCPD said the implementation will be "quick and timely."

Leaders said they believe the tiny devices are a big step to address accountability within the metro's largest police department.

Earlier Wednesday, the NAACP, More2 and the Urban League of Greater Kansas City called for the department to begin wearing body cameras. The groups also called for Smith's resignation and local control of the police department.