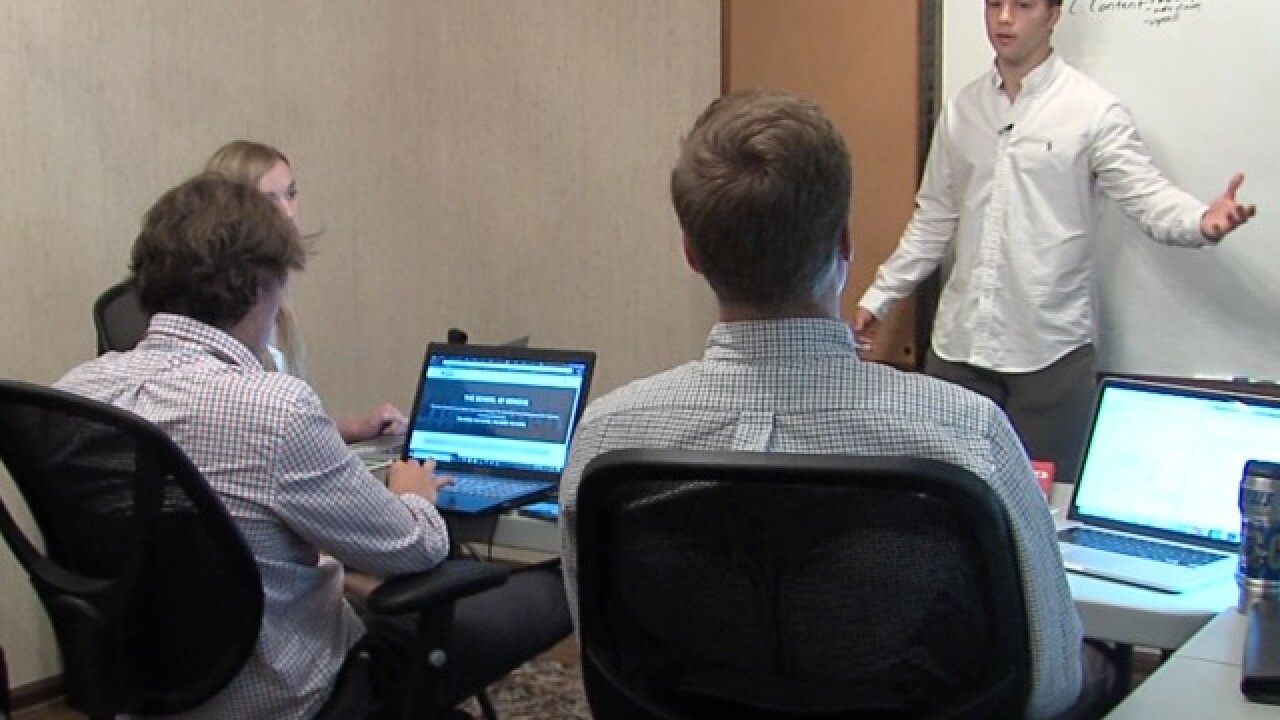 OVERLAND PARK, Kan. — Right now, many college students may find themselves working summer jobs. But one group of metro teenagers is taking a chance, starting a digital-based marketing company focused on social media and strategy.

"We are a group of 18 to 21-year-olds who should be interning at a big corporation, cleaning the toilets," explained Jake Bjorseth, founder and CEO of TRNDSTTRS Media.

Instead, Bjorseth started TRNDSTTRS Media with two friends after graduating from Blue Valley North in May 2017.

Within a few months, they had worked with dozens of businesses on a Snapchat marketing strategy.

One year later, Bjorseth speaks to a group of about 10 teenage to young adult employees. Bjorseth said some are interns or working on sweat equity, but they are all trying to build something special here.

"We want to have something to come back to," said Kyle Berger, who joined TRNDSTTRS Media in March of 2018. "What attracted me the most was we were going to be able to lead a larger team."

After the initial meeting focused on inspiration and big picture, Berger said he worked on relationship management and targeting new business.

He will be going back to the University of Arkansas in the fall, so he will be using Google Hangout and video conferencing to maintain what they describe as an "open" workflow.

"We are here to help each other grow personally," said Berger.

Bjorseth said the company's goal is to empower and work with 100 businesses in the metro by the end of the year.

"We're on track to do that," explained Bjorseth.

His next work duty was hosting and producing a pre-scripted podcast called KCMT or Kansas City Marketing Team. Bjorseth said the podcasts are a way for them to tap into growth hacking, including unique ways for you to grow your business. Monday's topic was search engine optimization or how to improve your rank on Google.

They have about 10 episodes available on Spotify and iTunes now and are working to put out three or four each week.

Monday, Bjorseth advised business owners should have websites with a purpose because this has the ability to increase sales.

"Fix the back end of your website," said Bjorseth.

He advised for people to use high-ranking keywords as identified by Google Trends.

Bjorseth said business owners should also be focused on creating relevant content. He said infographics and other tools can help put information in perspective.

The creatives in the business spent time editing videos for clients and making logos.

The grads are working to produce multi-platform content, using their youth as an advantage.

"Come and have a conversation with us. We will show you why we're better because of our age. More ambitious, more hungry. This is what we love to do," said Bjorseth.

TRNDSTTRS Media is also working to partner with Universal Music to use influencers to promote shows and new music in the Lawrence and Kansas City areas.

They will be launching a branch in Lawrence this fall.