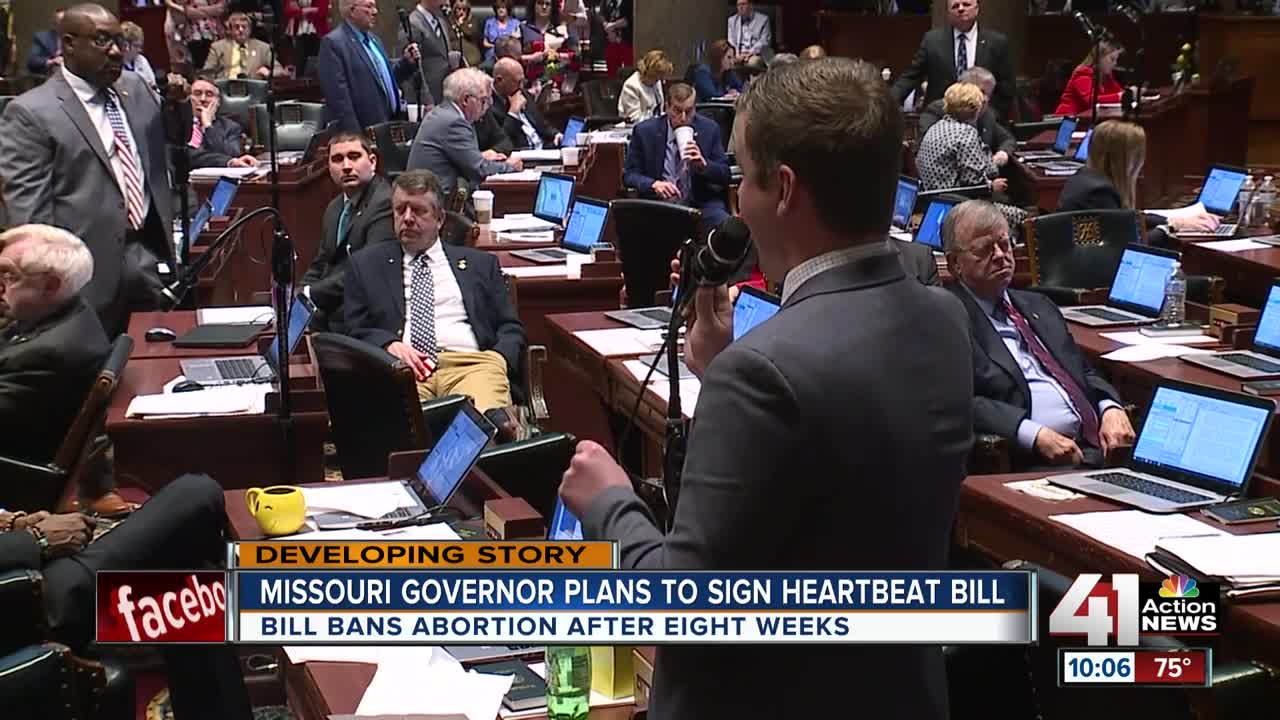 The Missouri House of Representatives passed a bill to ban abortion after eight weeks of pregnancy on Friday, sending the measure to Gov. Mike Parson, who is expected to sign it.

KANSAS CITY, Mo. — The Missouri House of Representatives passed a bill to ban abortion after eight weeks of pregnancy on Friday, sending the measure to Republican Gov. Mike Parson, who is expected to sign it.

The ban only allows exceptions in cases of medical emergencies, not rape or incest. Doctors who perform abortions after eight weeks of pregnancy would face five to 15 years in prison. Women who have abortions would not be prosecuted.

The House passed the bill on a 110-44 vote taken just hours before the end of the legislative session.


Near the end of the debate on the House floor, chants of "when you lie, people die" erupted from protesters, who were taken out of the chamber.

As the debate nears its end, chants erupt “when you lie people die.” Protestors are now being taken out of the chamber. @41actionnews #moleg pic.twitter.com/ipZg1ycTx9

Speeches from lawmakers on both sides of the aisle were full of emotion.

Rep. Rocky Miller, a Republican from the Lake of the Ozarks area, told lawmakers that he played a role in an abortion 30 years ago.

"I didn't know anything. That's not an excuse, it's just the truth," Miller said. "I did not know what I was doing. I'm so glad that in the 30-some odd years since, we now have the ability to inform people like me, the unfortunate person that had to go through that horrific medical procedure to kill a baby, that we now know, and we have been given information to know, what is going on."

Rep. Barbara Washington, D-Kansas City, said the focus should be on giving children a better quality of life.

"We have higher unemployment but lower income, we have 50.7 percent of our children on free and reduced lunch because they are poor," she said. "So if we care about life, we should care about the quality of those children's lives."

The Senate passed the bill early Thursday after a lengthy debate.

The Missouri bill comes as abortion opponents across the U.S. push for new restrictions in hopes that the more conservative U.S. Supreme Court will overturn its landmark Roe v. Wade ruling legalizing abortion.

Missouri's bill also includes a total ban on abortions, except for medical emergencies, if Roe v. Wade is overturned.

Kentucky, Mississippi, Ohio and Georgia have approved bans on abortion once a fetal heartbeat is detected, which can occur in about the sixth week of pregnancy.