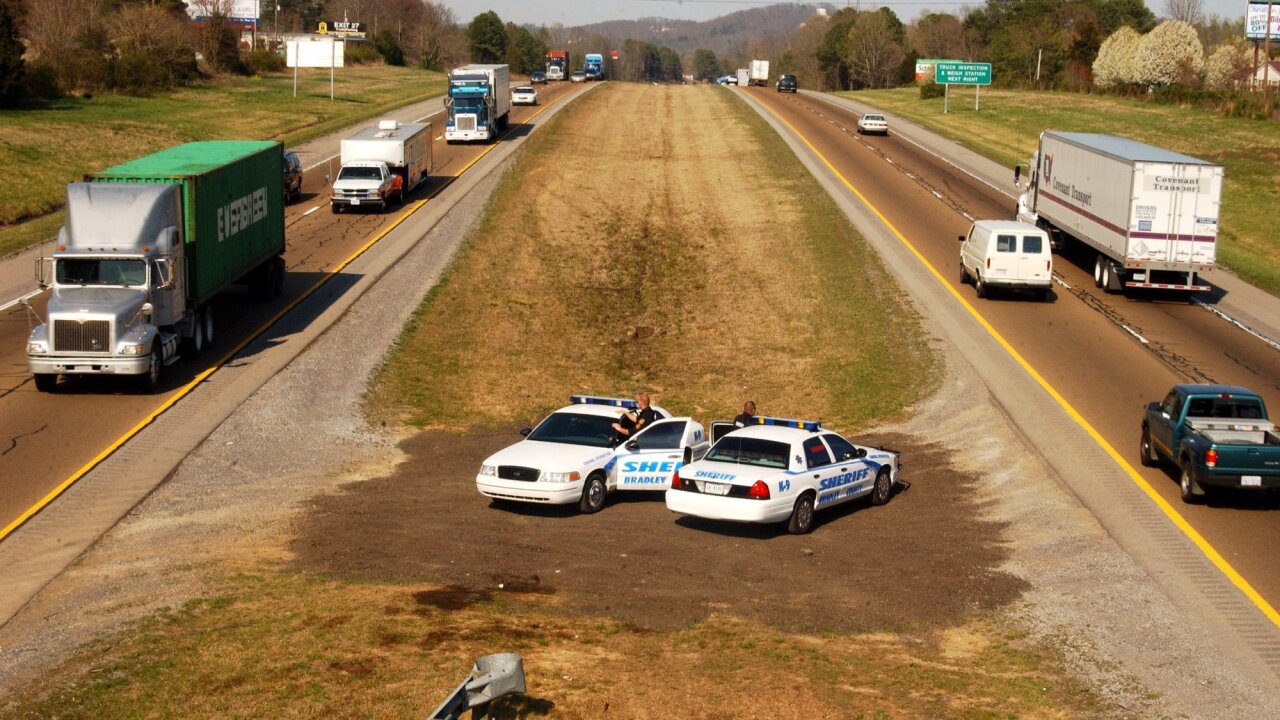 (Copyright 2020 The Associated Press. All rights reserved. This material may not be published, broadcast, rewritten or redistributed.)
MARK GILLILAND/AP
** ADVANCE FOR WEEKEND OF APRIL 3-4 ** Bradley County Tennessee Sheriff's Department officers David O'Boyle, left, and Keith Fretwell watch traffic on I-75 near Cleveland, Tenn., March 23, 2004. The officers found $1.1 million in a car during a search that was done on Jan. 12, 2004. A search turned up vacuum-sealed plastic bags of cash, about $1.1 million stuffed in compartments, behind door panels and in suitcases _ money the driver described as the proceeds of a marijuana sale, the officers said. (AP Photo/ Mark Gilliland)

KANSAS CITY, Mo. — Missouri seized more than $5.9 million worth of property in 2019 under the Criminal Activity Forfeiture Act, according to an annual report from the State Auditor’s office.

That represents a more than 35% decrease from 2018, when law enforcement officials statewide seized more than $9.1 million in personal property.

It’s also a 16% drop from 2017, when prosecuting attorneys from Missouri’s 116 counties reported more than $7 million in personal property seizures.

Across the state, there were 493 civil asset forfeitures under the Criminal Activity Forfeiture Act, or CAFA, but charges were only filed in 249 — or barely half — of those cases.

Under CAFA, “law enforcement officials may take possession of property or cash believed to be involved in or related to a crime,” but state law requires those funds be used for public schools, though that doesn't often happen.

There were 43 CAFA seizures last year in Jackson County, which netted $300,115 of personal property, but the county only filed charges in seven of those cases. All of those civil assets are listed as pending a final decision in the case.

Nearly 13% of all seized property was eventually returned to its owner, including $22,173 in Clay County and $7,505 in Platte County, but the most common outcome — involving nearly 45% of all seized civil assets — was to transfer the money to a federal agency.

Around 40% of seized personal property is still pending a final decision under state law, which requires a conviction or guilty plea and directs all proceeds from liquidation of seized civil assets to public school funding.

However, some state law enforcement jurisdictions make liberal use of the U.S. Department of Justice’s Equitable Sharing Program, which allows those agencies to forfeit the money to federal authorities.

If eligible under the federal program, the Department of Justice takes at least a 20% cut of the seized assets, but returns as much as 80% that can be used by that law enforcement jurisdiction for virtually any departmental purpose, including law enforcement personnel salaries.

Phelps County, which includes Rolla and is located in south central Missouri, transferred $866,100 of the $924,987 that it seized in 2019 to federal agencies.

Historically, Phelps County has abused the system, according to an NPR investigation, which found that the county targets drivers along the Interstate 44 corridor and uses the funds seized — after washing it through the Equitable Sharing Program — for things like a new county jail.

Only St. Charles County — which seized $1.64 million in civil assets, of which it transferred more than $1.32 million to the DOJ — utilized CAFA more in 2019.