KANSAS CITY, Mo. -- Police said an 8-year-old boy died after he was hit by a garbage truck Friday afternoon. 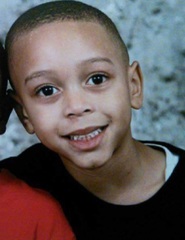 Neighbors and family are mourning the death of Dra’Viontay Baker.

Around 3:30 p.m., Dra’Viontay and his friend were playing with a red wagon when the driver of a Town and Country garbage truck struck the young boy in front of his grandparents’ home at E. 100th Street and Drury Ave.

“My heart goes out to all their family. I’m saddened by it I really am,” Monica Thomas, a neighbor, said.

The impact sent the boy underneath the truck. Paramedics took him to the hospital where he died.

“He’d just ride his bike up and down the street. [Dra’Viontay] was full of joy. He always had a smile on his face,” Shemar Chatmon, a friend, told 41 Action News.

Dra’Viontay’s friend is expected to survive.

“We’re like basically big brothers to [Dra’Viontay], playing basketball with him, keeping him out of trouble and stuff,” Zyair Taylor, another friend, said.

The boys are well known to many on this block.

“They was never in any you know dangerous where they just played in the street and a car came and they didn’t get out of the way. It was never like that,” Thomas said.

Police spent several hours reconstructing the scene and examining the entire truck including its brakes.

“We have some very safe drivers that come around and pick up our trash, and I’m sure he’s devastated about what happened,” Hickman said.

Investigators said the driver was not under the influence before striking Dra’Viontay.