KANSAS CITY, Mo. — More than four months have passed since the City Market began charging drivers who park in the city-owned surface lots on weekdays, and in that time, a private parking company has issued more than 800 citations for non-compliance.

The change, launched in March, was geared toward stopping commuters from leaving their cars in the lots all day so they could park for free and take the streetcar to work.

"What we found out as tenants is that sales were declining," Spini said.

Following a recommendation from an audit, the City Market began charging $1 per hour for parking on weekdays from 7 a.m. to 6 p.m. Free parking in the City Market complex was also cut down from three to two hours.

Our camera was rolling on March 1 as one of the first citations of the day went to Dale Castle.

"Found this on my windshield, this citation for $33," a frustrated Castle said.

He had been parking in the lot for free for 25 years.

"We kind of took that case by the hand when we saw it on your newscast," said Sue Patterson, Director of Marketing & Events for City Market.

Patterson found Castle's $33 citation was a mistake, and she got it waved. The cost of non-compliance is actually $13, and all first-time tickets are forgiven.

From March 1 to June 19, when we requested the records, a private company called Premier Parking issued 831 citations in the lots. Nearly 180 of those were later voided, but the total revenue came to $4,154. Patterson said it all goes back into the parking program.

"The intention of the parking program was never to make a buck or we would have done it a long time ago," Patterson said.

They're not making a buck off the 245 unpaid citations racked up in the first few months. People who don't pay are simply turned over to a collection agency. Premier Parking emphasized towing is a last resort and "used only when a vehicle has multiple citations or is a safety concern."

"It has helped our business. It's helped mine," Spini said.

Just across the street, we heard a different story.

"They're trying to patch something up that needs more work, is what they're doing," Cascone's Grill employee Mary Harmon said.

Harmon is a 30-year veteran of the staff. Although she thinks the new policy has made parking easier for customers, Harmon says the situation hasn't improved for her coworkers.

While City Market employees get to park for free in the lots, people who work at River Market businesses must pay $55 for a monthly pass.

Instead of paying, some Cascone's employees rely on free two-hour parking and leave work throughout the day to move their cars and avoid citations.

"What else can they do? You know unless they want to pay the $55 a month, and some of them can't afford that," she said.

Spini realizes his neighbors across 5th Street aren't happy, adding the solution is really a band-aid.

"It's something that got addressed. I don't know that it's 100 percent right for everybody yet. Hopefully, the city will find a way to add more parking down here, because we're going to need it eventually," he said.

Right now, according to the city, there are no plans to add public garages in River Market. 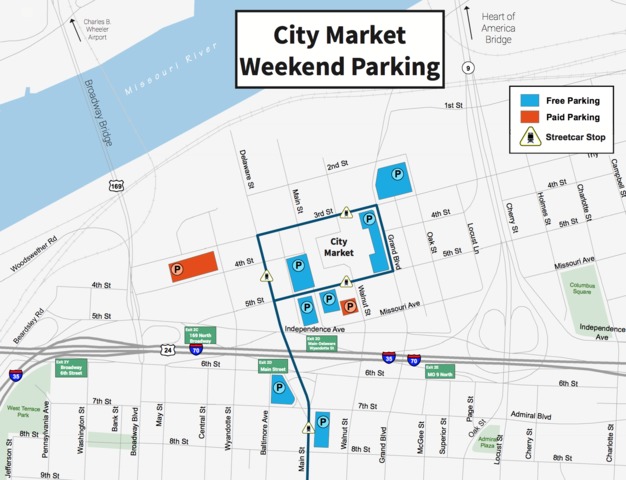 Parking in the City Market lots is free on the weekend, but spots fill up quickly. Patterson and the KC Streetcar Authority recommend parking in free lots at 6th and Main or 7th and Main, then taking the streetcar the rest of the way. The City Market has a "veggie valet" service, so you can leave your purchases with volunteers as you retrieve your car.