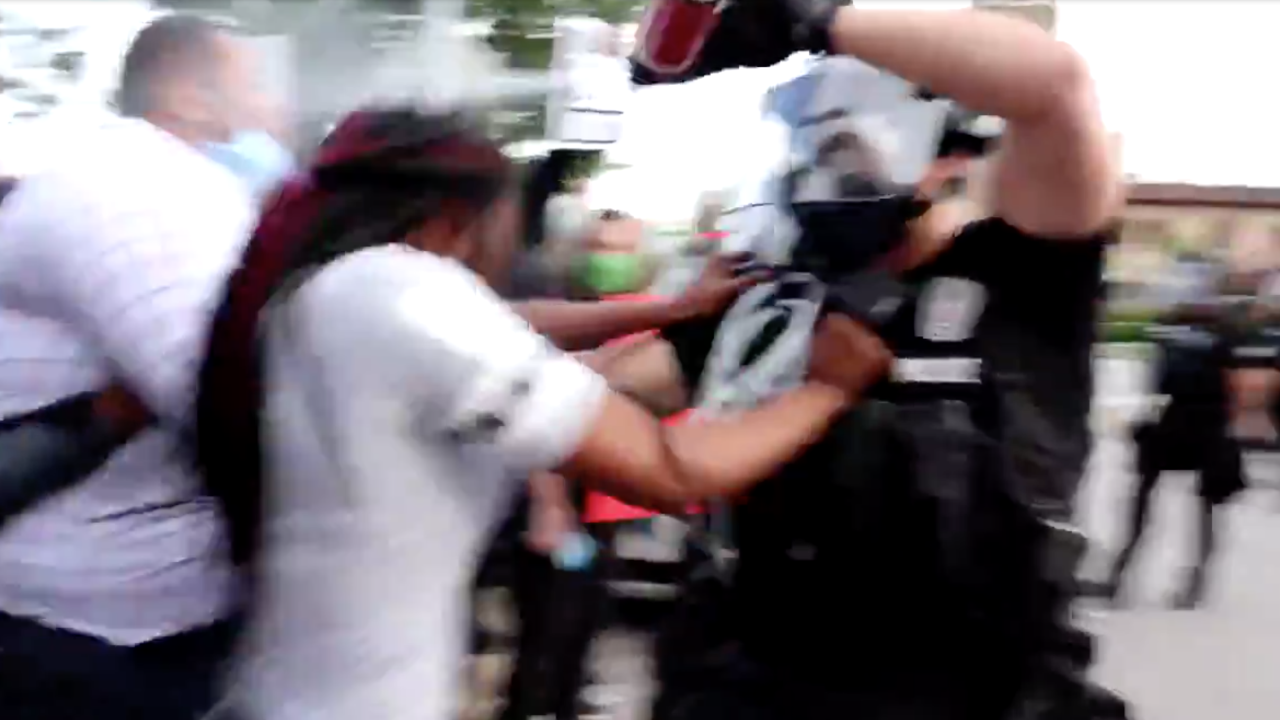 Copyright 2020 Scripps Media, Inc. All rights reserved. This material may not be published, broadcast, rewritten, or redistributed.
@Elise_Villa/Twitter
Kansas City, Kansas, activist Tarence Maddox is suing the Kansas City, Missouri, Police Department for damages suffered when he was pepper-sprayed by officers in a video that went viral. The lawsuit that also names his juvenile daughter as a petitioner.

KANSAS CITY, Mo. — Kansas City, Kansas, activist Tarence Maddox is suing the Kansas City, Missouri, Police Department officers for damages suffered when he was pepper-sprayed by officers in a video that went viral. The lawsuit that also names his juvenile daughter as a petitioner.

Maddox, who served on the Wyandotte County Commission from 2011-2105, and his 15-year-old daughter were among those pepper-sprayed after he stepped off the curb May 30 during a protest against police brutality at the Country Club Plaza.

Maddox’s attorneys claim the officers' action demonstrated “use of force without just cause” — which, the suit claims, constitutes assault, battery and false imprisonment — in a Petition for Damages filed Monday in Jackson County Circuit Court.

The incident happened near West 47th Street and Mill Creek Parkway during a particularly intense week of protests against police misconduct after George Floyd’s death at the hands of Minneapolis police.

“If you ain’t got the balls to protect the streets and to protect and serve like you was paid to do, then turn in your (darn) badge,” Maddox can be heard saying in a video posted to Twitter that has been watched more than 8.6 million times, drawing national headlines and scorn.

@kcpolice WE are disappointed. This man was using his WORDS and was responded to with WEAPONS. #BlackLivesMatter #JusticeForGeorge pic.twitter.com/B7Ef7qAzK3

Near the end, he appears to step off the curb and into the street, which is when officers — including N. McQuillen, J. Oakes and Taylor Hall as named in the lawsuit — approach Maddox and things get ugly.

According to the court filing, Maddox said he was exercising his right to free speech when a half-dozen officers “advanced very quickly” and without providing any instructions to him, his 15-year-old daughter or other protesters.

Maddox’s daughter was sprayed in the face with pepper spray from “approximately 4 inches away,” the suit said with a photograph of the officer's action included.

Officers also sprayed Maddox and removed him forcibly from the crowd and into the street before spraying pepper spray “into the crowd like they were spraying silly string at a birthday party,” the petition says.

Maddox — who allegedly suffered injuries to the face, mouth, head and legs during the incident — subsequently was arrested, and video of his arrest made national headlines.

Maddox’s lawyers claim the officers’ actions constitute assault and battery by deliberately harming someone who posed “no danger to the defendants” and continuing to use “more force than was necessary” during his arrest.

It raises similar assault and battery claims regarding the officer’s conduct toward Maddox’s daughter.

Other individuals also were arrested during those early days of protesting for simply standing in the street, but KCPD eventually changed its tactics and quit using chemical weapons and less-than-lethal projectiles against protesters after KCMO Mayor Quinton Lucas intervened.

A KCPD spokesperson said the department would not have a comment since it was not specifically named in the lawsuit.